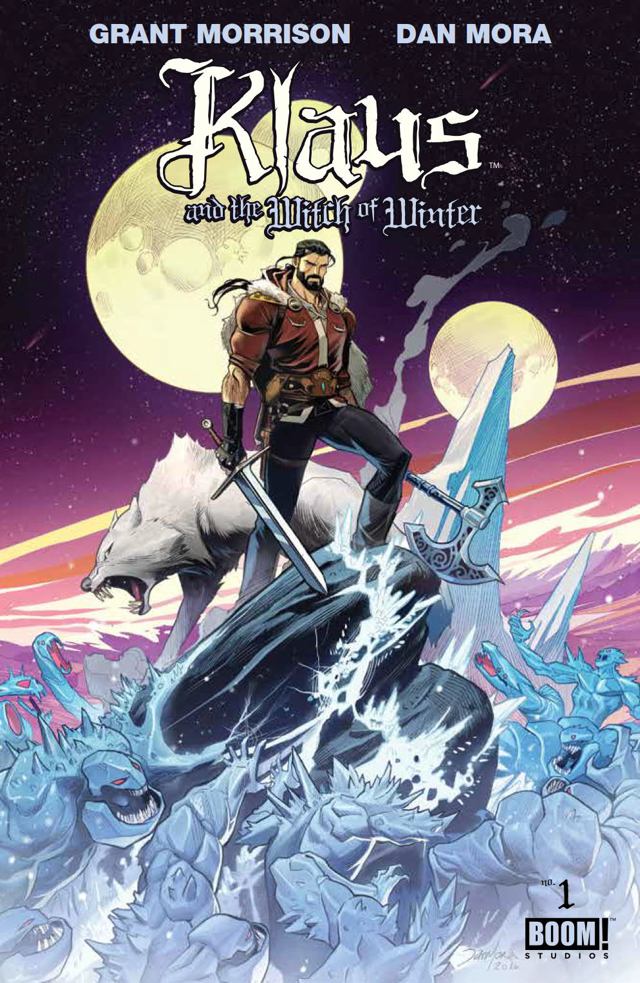 I had read some of the Klaus series Morrison and Mora collaborated on previously, so I had some idea coming into this one-shot that this wasn’t going to be a tale of Jolly Old St. Nicholas, the guy with rosy cheeks from the Coke advertising. This guy’s jolly in is own way, especially when he’s kicking ass and taking names.

Klaus made me laugh more than I ever expected, and the path this one-shot takes entertained me greatly. This is much more than a “hey, look how badass Santa can be” story, it has wit and a lot of cleverness to go along with the powerhouse Klaus crushing foes. There’s an undercurrent of Christmas spirit flowing through this comic that gives it a lot of life and fun, despite seeing some classic fairytale characters and concepts laid low. There is drama, Fables-style literary goodness, humour and a happy ending, and I really enjoyed every second of it.

Morrison and Mora pace this one very well, fully fleshing out the entire story in the space allotted. I appreciated that immensely, as I find one-shots very hit and miss. The story arc progresses exactly as it should, with no part being neglected or any other drawn out. The duo stick the landing and develop the characters well in the short time allotted, including delivering a powerful death scene that had a very short span to build up. They do right by these characters, and introduce great spins on an old mythos.

Dan Mora’s artwork blew me away throughout this issue, as he delivers a Klaus that is more chiseled than Superman ever wished he could be. Power radiates off this guy, but Mora tempers it very well with an equivalent amount of kindness. At first, you see a guy who’s part Conan – a warrior looking guy, but the facial work Mora pulls off in this issue is what sells this as being Santa. Through Mora’s artwork I found myself buying the premise, as the lead character convinced me he was Santa through the kind demeanour Mora ingrained in the character. The guy can throw down, too, and the action sequences are great, but most of all I was impressed by the subtle details Mora weaved into this story that made it a true story of the man who would be known in many cultures as a Jolly Old Elf.

Klaus And The Witch Of Winter blew me away. I expected it to be darker and with less subtle storytelling, but Morrison and Mora actually increased my Christmas spirit whilst having Klaus throw down and beat the ever loving hell out of an army of foes coming at him. If that doesn’t scream “Happy Holidays”, I’m not sure what does. Overall, this is a well executed one-shot issue with entertaining twists and top notch art.