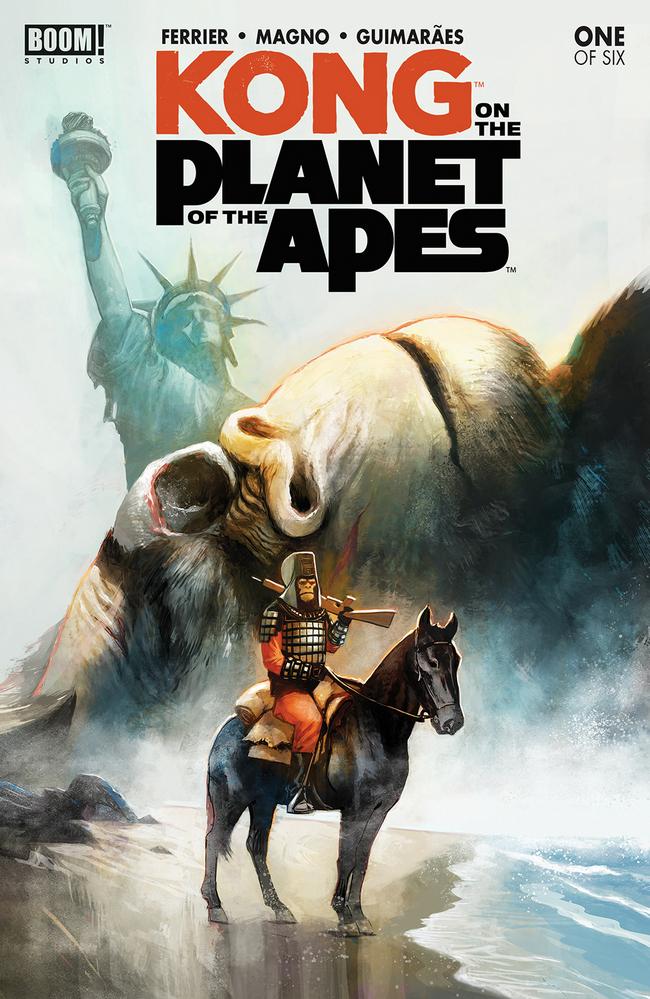 Picking up soon after the events of the 1968 Planet of the Apes film, Zaius and the gorillas return to the beach to do away with the evidence that humans once ruled the planet. While the apes get ready to blow up the Statue of Liberty, a gruesome discovery is made – the body of a giant Kong-like ape has washed up on the shore nearby.

The Apes crossover books continue to entertain and reinvent the familiar characters from the original films. With previous series pairing the talking apes with Star Trek, Green Lantern, and Tarzan, BOOM! has succeeded in telling great stories in what should be a novelty act.

Kong/POTA is no exception. Showing great care for the continuity and characters of the original film, this issue jumps off in exciting new directions and quickly bands our heroes and villains together to explore more of this world.

Magno’s art is superb and his apes stay distinct, on model but never caricature. His art fits well with the much-celebrated Bechko/Hardman Apes series that launched BOOM! as the holder of the Apes legacy. Menacing characters and monsters explode out of the panel grid, challenging the reader to hold on for dear life.

Guimaraes colors also harken back to the earlier BOOM! Apes comics with a gritty realism to the earth tones and a shock in the red blood.

The splash pages and reveals are particularly effective and Magno shows great talent for framing the big moments. The last pages of this issue play like the end of the first chapter of a movie serial. Which perhaps summarizes the issue – Kong On The Planet Of The Apes is the movie serial that we can only dream of seeing. But thanks to the magic of comics, we can experience it. Don’t miss the next exciting installment!