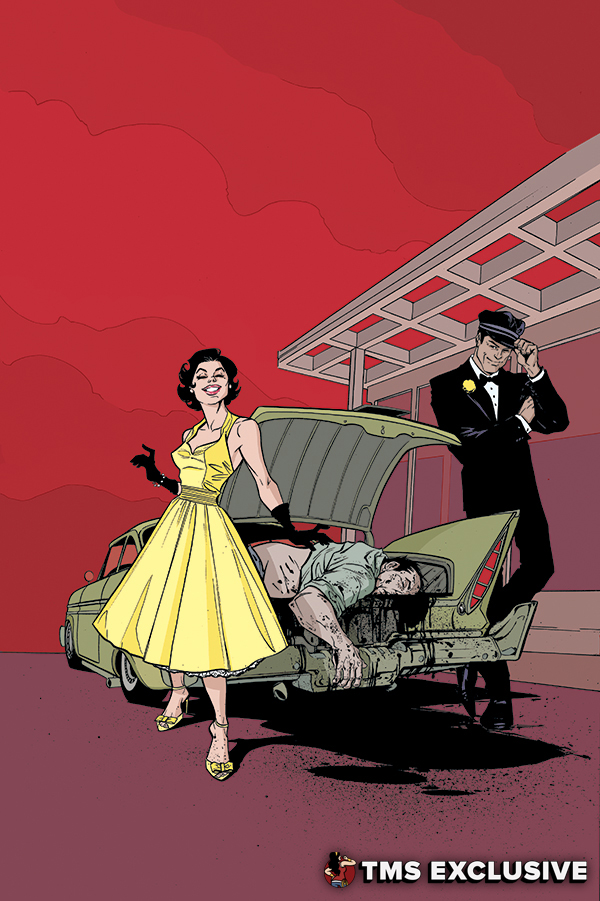 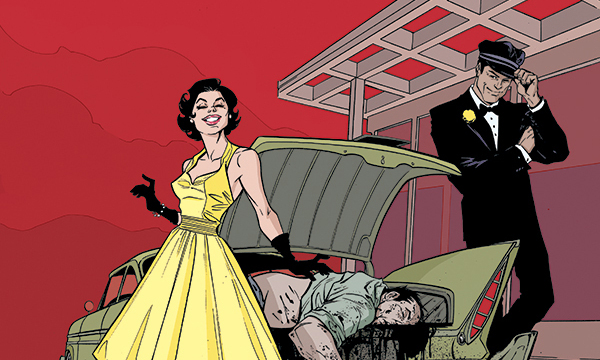 The first issue had a clear role in showing you that Josie Schuller was an unrepentant hit-woman who could get the job done and still keep an orderly home. Now, Jones and Rich sink deeper into the roles that Josie uses to get that job done. The title alone lets you know there will be death in every issue. This time Josie as at the teased gentlemen’s club from the end of issue one. However, the hit presented in this issue comes across as flagrantly excessive.

The pages continue to drive home the point of Josie’s commitment. They also show off her uncanny abilities to take down men twice her size. The necessity of the scenes could be debatable for some as they finely skirt a line,  reminiscent of Xenia Onatopp in GoldenEye. Laura Allred uses lots of red in the clothing and backgrounds, which highlights blood splatter in black, just as it is on the cover. It’s a very stylish juxtaposition. Jones makes it clear through facial expressions and a final supermodel like pose at the end that this is Josie’s job. It is not sexual; it’s just business.

This series seems to be falling into a pattern of always the bigger job around the corner. That might be harsh to say given only two issues. With the reveal at the end of issue two, one wonders if it will be the one job that could last throughout the rest of the miniseries. Of course, perhaps Josie is just that good at her job and issue three will be yet one more vignette showing off her cold-blooded prowess, which fits more  in line with previous books by Rich and Jones. If that is the case there might be a lot of readers turned off in future issues if there is no moral debate ahead.

Rich and Jones have made period piece mysteries their go-to storytelling. This book continues to be yet another one of their “on-the-surface” mysteries, revealed in each consecutive issue. The other unnerving factor is the choice to once again have it set in a white-washed culture. Some would talk about historical segregation or other factors. However, if that is the case, at least a touchstone or some sort of nod to the injustice would go a long way to selling a more grounded setting.

With a hit complete in the first half of the book, the subtle dilemma of the issue is not found in the killing. The problem is in the position Josie’s boss puts her in when they meet. There is no debate raised about Josie’s skills or ability. The sole problem raised is her commitment to her job versus the commitment to her family. It is an issue many women still currently find themselves constantly being questioned about in the workplace.

The accusation that you are not committed, not able or not willing to complete tasks because of your role at home is a very gender-based issue that women have been fighting for decades. This period piece allows Rich and Jones to explore that in a more blatant fashion then in a perhaps more political correct time period. The switch in thought comes from the fact that Josie’s boss, instead of wanting to hold her back, questions her because there is a desire to have her “move up” in the ranks. It’s a refreshing and more unique problem. Josie’s feelings that she is “comfortable” where she is at and not feeling a desire to move any further, despite her bosses’ wishes, is something that I can find easy to relate to.

The deeper debate comes from how much the reader puts into it. On the surface, there is plenty of action, tension, and moral debate once the cliffhanger is unleashed. When broken down, it can be harder to find anything beyond the action and Josie’s personal morals. For those who want something more, this might not be the book for them. As always, it has pulled it off with a rather exquisite, tension filled fashion.

This second issue of Lady Killer finally sets the stage for a potentially deeper storytelling, but makes it unclear where she will take the audience. It is a story that could have a very unnerving turn of events, or create a very stylish anti-hero.