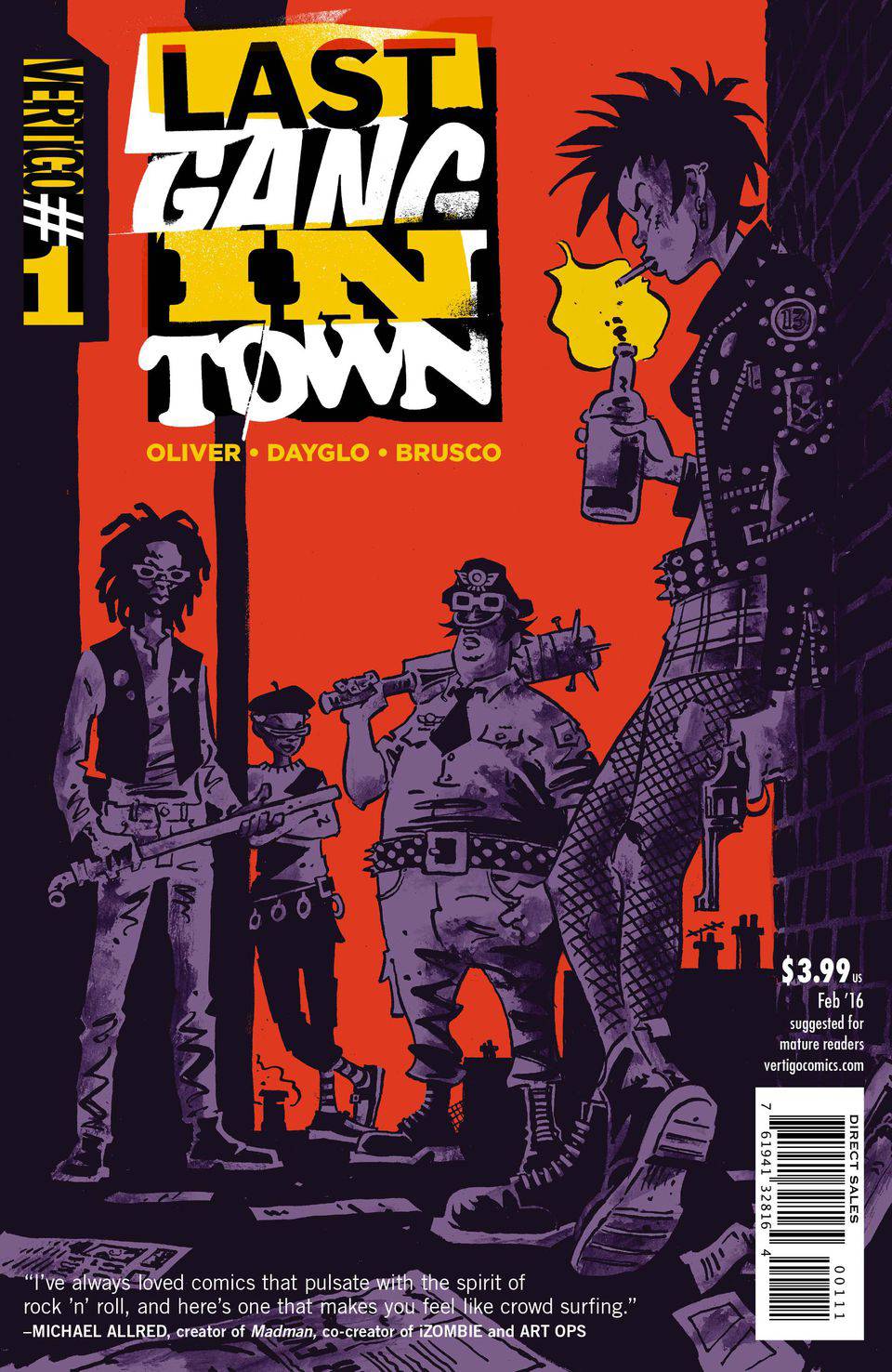 Punk rock, thievery, and general ruckus. Sounds like a good hook for a comic series, no? Vertigo continues its new series line-up with Last Gang in Town #1, written by Simon Oliver and illustrated by Rufus Dayglo with colors from Giulia Brusco and letters by Steve Wands. So, turn the music up, buckle in, and get ready for, well, a bit of a bumpy ride.

I wish I could tell you what Last Gang in Town is about, but the most that I could put together is that this book follows a group of general mayhem causers over several periods of time. Set in England from 1976 to present day, we follow several different characters fighting back against authority, stealing things, making big getaways, and, according to the solicit for this series “chang[ing] the face of the criminal underworld.” Sounds great in theory, but in execution…things could have been better.

Let me get this off my chest. I abhor negatively criticizing comics. I focus a lot on the positive filtered through, hopefully, fair criticism. However, there’s just not a whole lot to be happy about with this first issue, specifically in its story and writing. Simon Oliver is trying, he really is, to set-up a huge grand scheme, yet character (or group) driven story that is informed by a British punk rock culture and infused with intriguing manifestations of anarchy. However, this story is incredibly jumbled for a first issue. There’s a through-line, supposedly, but it’s entirely too convoluted to follow. The story is overrun by complex narration, over-the-top dialogue, and no real hook for the reader to follow. Perhaps I’m missing the point, and it’s something understood later in the game. Perhaps I’m not embroiled enough in British culture, but I just felt like I was missing the thing that would help me connect to the story. The opening pages were great. I enjoyed the goofiness and cavalier attitudes of the characters, in fact, it reminded me a bit of The Humans, one of my favorite Image books, which made me excited. But it was quickly overtaken by a series of hard-to-follow pages and an ending that didn’t leave me wanting more.

Okay, so the writing and story definitely could have been stronger, and maybe things will get more relatable in the subsequent issues. But if there’s any reason I’m hanging around, it’s because the art in this book is phenomenal. While Oliver has written what could-be compelling characters down the line, Rufus Dayglo has breathed life into this book in an exciting and ruthlessly consistent manner. His character designs are spectacular, making it easy to follow the characters throughout the pages. Action is entertainingly depicted and the settings are extraordinarily detailed and vivid. Giulia Brusco is a monster on colors, bringing beautiful light onto the pages and giving the book the punk rock vibe it deserves. The art is goofy, yet seriously filled with talent. Steve Wands lettering is really fun on each page, as it feels natural (almost handwritten in areas). The narration is a bit hard to follow color-wise, sometimes, but overall the aesthetic of this book is outstanding.

I’m disappointed that I couldn’t get into this first issue as much as I wanted to. The art is fantastic, but the writing and plot just doesn’t grab me. I don’t think this issue is unreadable, but the plot is not particularly compelling nor well set-up. I might try to catch this book in trade to see if it all comes together. But, at this moment, the first issue might be the last one for me for Last Gang in Town.