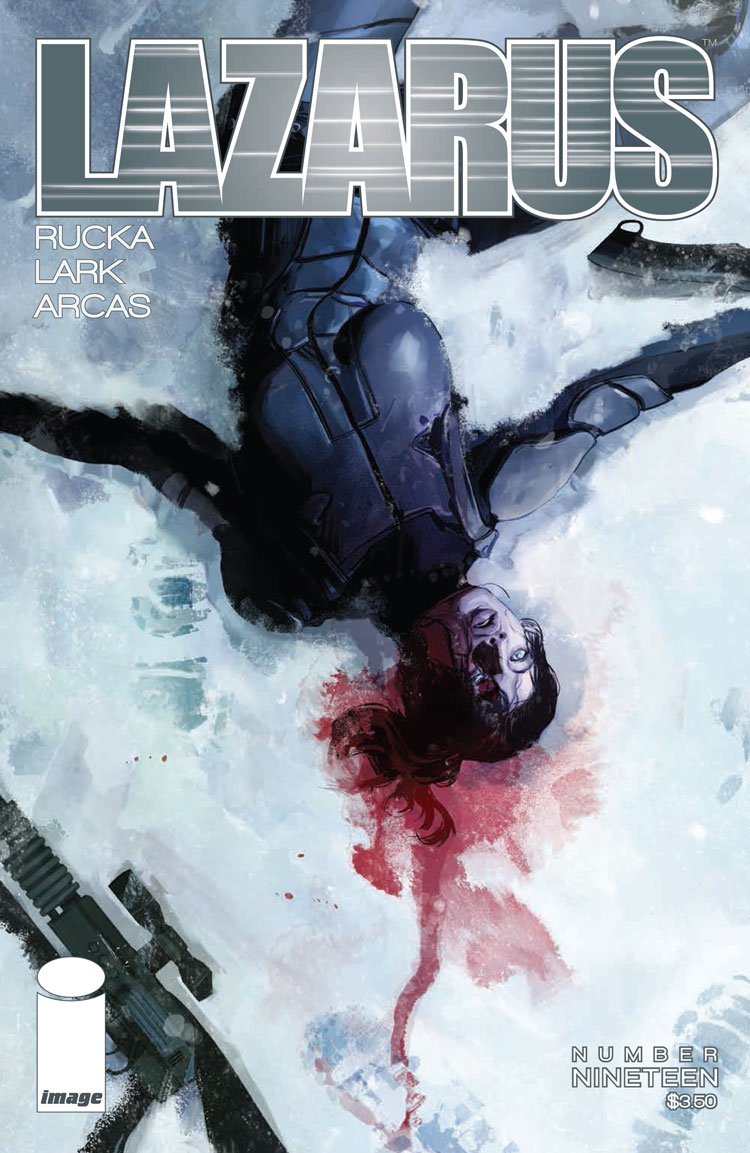 Forever Carlyle is dead. This is what happens next.

It’s oddly fascinating to see the world depicted in Lazarus keep turning, however tentatively, with its main character taken off the board. Partly because it just reinforces what an astounding job Rucka and Lark did in its creation. It almost feels like the world could keep going even without a script and pencils — just appearing before us. I say that, not to minimize the creators’ hard work certainly, but to praise just how thorough a service they have performed to each and every one of these characters. It’s pretty amazing when you think about it.

But the other piece of issue #19 that makes it so fascinating is to see just how much of the Carlyle’s existence is predicated on the life of a single woman, their Lazarus. Yes, we have been told that and knew that intellectually, but this may very well be the first time Rucka and Lark have made me feel it. That tension, the panic in some cases. The spite from other soldiers for their commander now laying cold on the pavement. It’s palpable, this need, now lost.

The politics of the world continue, even as the politics of the family get more and more twisted. The leadership vacuum with Malcolm’s illness has been pervasive, with Stephen barely hanging on amidst the wind and Johanna making plans on her own. And all of that is independent of Forever’s demise. It’s all as compelling as the most insidious soap opera, but the moments of truth far outweigh those of deceit. Sonia Bittner’s adoration of Forever, with zero knowledge of what was happening — that’s the part that struck me deeply. It’s a quick moment of dialogue, but it spoke volumes about her character and can’t be easily shrugged off.

The real power of the issue is, of course, the rise, with its ultra-violent, but almost cathartic characteristics. Lark and Arcas take that scene and break it down with just exceptional pacing that it feels like a hyperventilating cry, but bloody instead of tearful. The juxtaposition of the cool tones in the laboratory and the warm of Forever’s movements — their joy and her pain — is just a magnificent example of how carefully this book (and its creators) considers violence and those who perpetrate it.

The back matter to issue #19, as always, is eye-opening and even the letters to the creative team help shed new light on the world we’re seeing in monthly installments that can’t possibly come fast enough. This world Rucka, Lark, and company have built is so expansive, so totally absorbing, that everything — from the architecture to the cocktails — is worth turning over in your mind. To create something like that takes more than the usual brand of talent. Here’s hoping this book continues to rise like its namesake for years and years to come.

P.S. There’s a preview for Greg Rucka’s forthcoming Image title, Black Magick, that he’s launching with artist Nicola Scott included in this issue as well. Simply put, we can expect much the same from that title, in the most magnificent ways you can imagine.