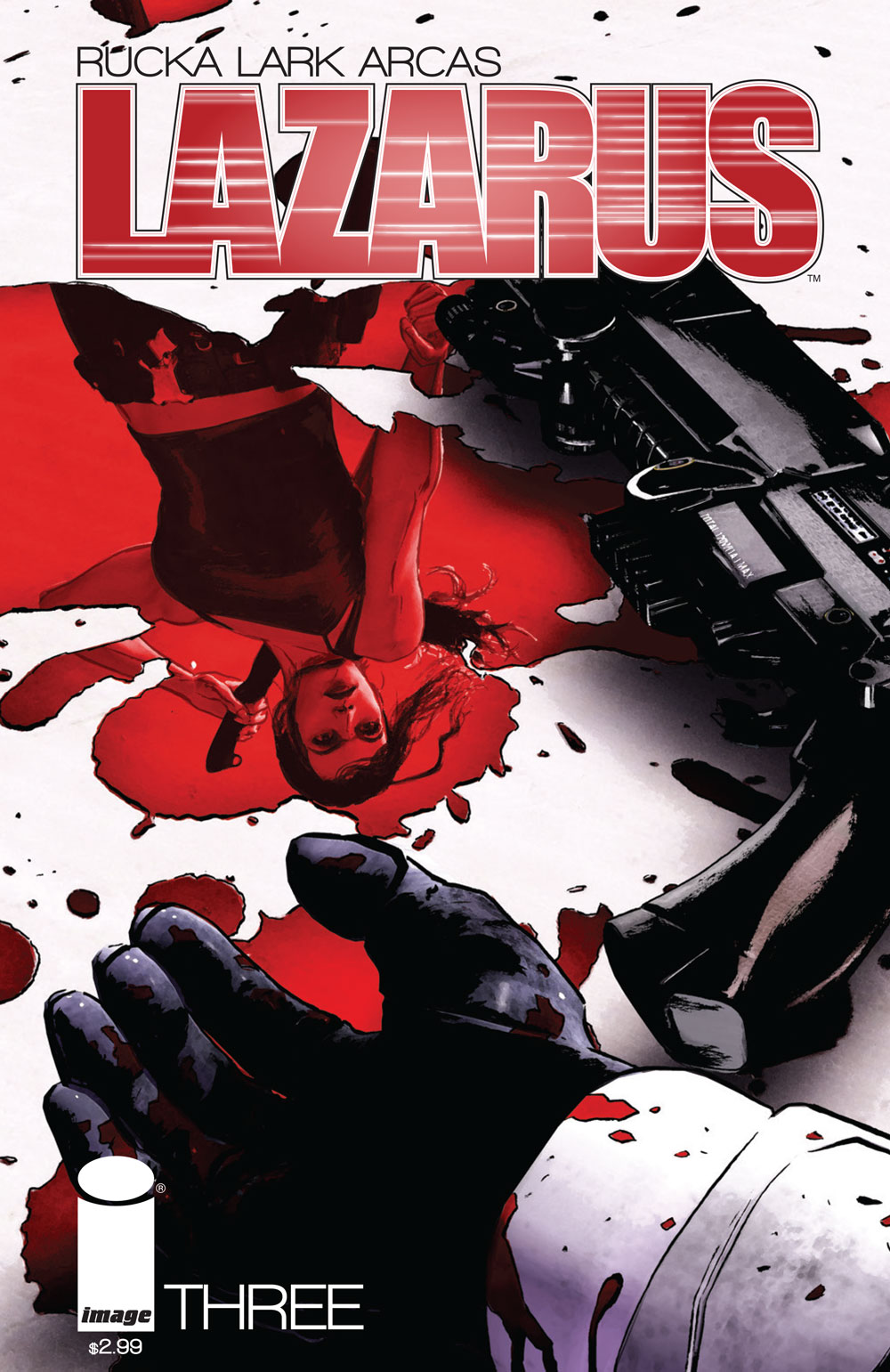 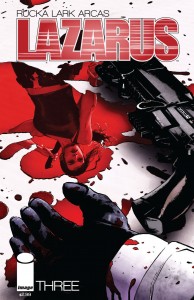 For those who thought the last issue of Lazarus had too much exposition, this issue steps up the hard-boiled action. For those who were enjoying the machinations of Family Carlyle, there’s plenty more of that to go around as well. And for those (like me) who find this book to be a shot of soma right to the brain, well, please try not to drool on the paper too much. Lazarus #3 is packed with political intrigue, familial betrayal, a hint of budding romance, and of course some severed limbs.

Last issue, Forever was captured by Joacquim, the Lazarus for Family Morray down in Mexico. She’s been sent to parlay with them, and has brought an offer from her father directly to the head of Morray. Meanwhile, the twins are in Los Angeles being evil and duplicitous and James is in the lab being SO creepy. The interplay between the families Carlyle and Morray reminds me of Henry IV by way of The Godfather — ruthless backroom politics done up with custom and ceremony. This book really is a fine cocktail of William Shakespeare and Aldous Huxley, but with more explosions.

The relationships between the Families is as interesting as the relationships between the stratified layers of Greg Rucka’s world as a whole. For example, Joacquim has higher regard for a fellow Lazarus from an enemy family than he does for a Morray serf (whom he refers to as “waste elevated to service”). Even Forever doesn’t question it. The scenes between Eve and Joacquim are easily the highlight of the issue. The first time we see a pair of Lazari together, we learn that they really do exist apart both from the servant class and from their Families. Those scenes also made me keenly aware of how relatively young Forever is. It’s a testament to Rucka’s writing that I can go from “Damn girl, that’s cold as ice” to “Awww, bless your heart” in a couple of pages.

Michael Lark and Santi Arcas are a fantastic pair on the art, with Arcas’s contributions as colorist really making an impact. We bounce between at least four different set pieces in 22 pages, and Arcas has a distinct color palette for each. Bright blue for the Twin’s house in LA, beige for the desert compound, bold purples and reds for the sunset drive. Lark’s gift for conveying personality with faces is a treasure. If I could exude just an ounce of Forever’s attitude from those first few pages, I’d never have to say anything twice again. I really enjoyed how something as little as a smirk or a vague frown had me filling in story blanks in my head. Every character looks like they could step off the page any minute.

Things are ramping up. Forever’s eye is not entirely on the ball. Carlyle doesn’t appear to be the only Family with loyalty problems. Johanna’s contempt for her little sister has exceeded her contempt for serfs and waste. Weirdly familiar people in an uncomfortably recognizable future make this issue yet another fine read.