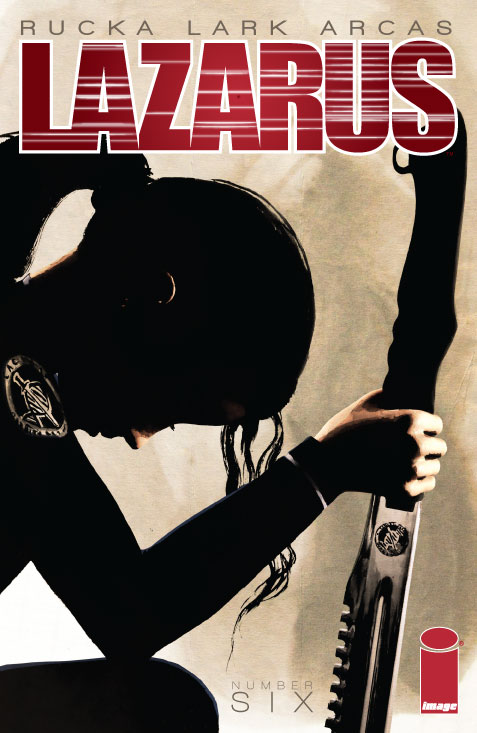 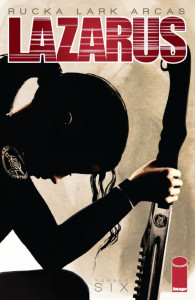 This issue continues the new arc that dives into the past of our Lazarus (a genetically engineered protector of the family Carlyle), known by the name Forever. Just like in issue five, we’re given a few pages at the beginning that enlighten us more on her childhood, or lack thereof, and the people who shaped her perspective. While the exposition helps to create empathy with our leading lady, it subtly does so much more. It gives us insight into possibly just how old some of our characters actually are, despite their youthful appearances in previous issues. It also shows that we cannot completely trust our normal physical measure of people’s ages in this series.

The second half the story moves along Forever’s current story of trying to seek out the truth within the family manipulation that is happening around her — by telling us more about the people who wish to overthrow those Forever has sworn to protect. It’s been slow in coming, but there are many threads brought together in this issue to, hopefully, start what readers would assume is the beginning of Forever’s “reeducation” about the world around her.

Michael Lark’s art continues to rely heavily on dark shading and emotional lines along faces. It creates a raw feeling and appearance that seems to play on the dystopian feel to the story and encompass you into what you’re reading.

So, what is the drawback? If you are uncomfortable or easily upset with women using their sexuality and bodies as tools of distraction there might be one scene that could potentially offend you. This is also where broader scope is starting to become a little less new reader friendly. The first arc did such a good job of world-building in a not too distant future where economic collapse has sent us back into a feudalistic system. However, these general settings and ideas are beginning to become more complex. The mixture of science fiction and political drama is becoming, enticingly meddled mix of drama with the cast of characters becoming even broader.

That doesn’t mean avoid this series. That means get yourself a copy of the first trade and catch up, then enjoy.

For more thoughts from Greg Rucka on Lazarus, check out this week’s HANGOUT with special guest — the writer himself!