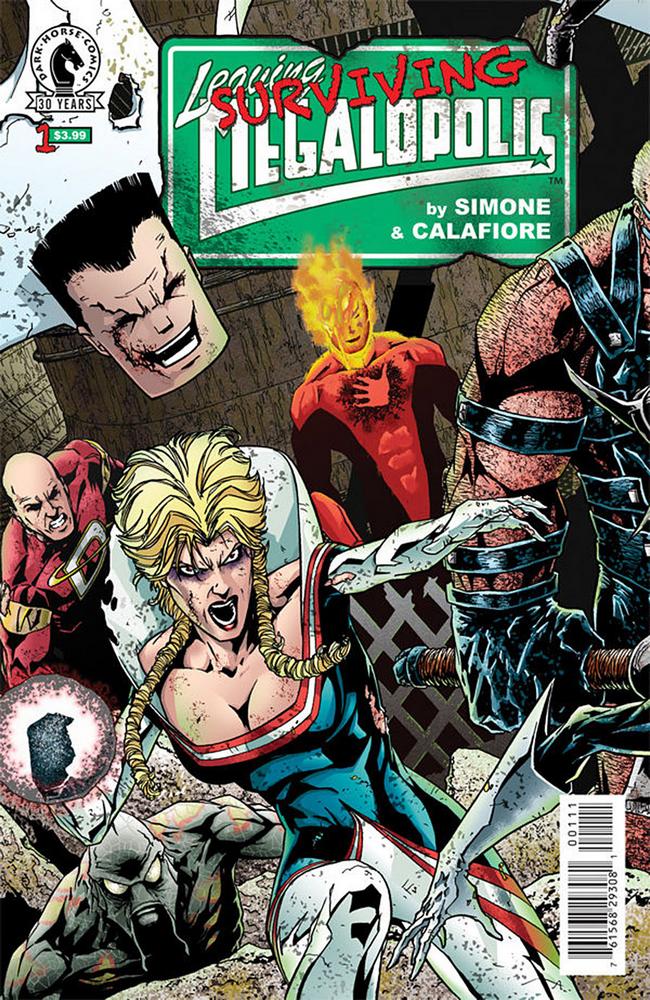 Secret Six collaborators Gail Simone and Jim Calafiore return to the scene of the crime of their Kickstarter comic Leaving Megalopolis to further explore what happens when a city full of superheroes turn the place, and each other, inside out.

The premise taken alone — that a catastrophic event turned a bunch of superheroes into murderous villains and are one collapsed bridge away from the survivors — is not all that promising. We’ve seen superheroes behaving badly within the mainstream since about 1986 with a little comic called The Watchmen, and if we’re being really honest, the medium still has not quite recovered from it.

At some times, it really does feel like superhero comics segregated themselves onto an island and began tearing themselves apart as a gruesome spectacle, which, ironically, is why Surviving Megalopolis is worth the price of admission whether you’ve read its predecessor or not.

The key thing about Simone and Calafiore is that when they go to dark places, they don’t do it to wallow or find cheap excuses to get off on cruelty, which is even more immediately evident in the Finding Megalopolis #1 free comic than Surviving Megalopolis #1. (There’s a lot of verbing of Megalopolis going on.)

Finding Megalopolis digs into the backstory of the city’s resident speedster Fleet as his life collapses in the typical sort of ways, losing his job as a teacher with his family following soon after and his wife using his superhero identity as a form of child endangerment to get sole custody. That basically leaves him with being a superhero as the only thing that made him feel wanted or valid as a person. Where he truly bottoms out before the monster appears is when he takes a minimum wage warehouse job fulfilling two day online orders for a web-based company whose name starts with the first letter of the alphabet.

Some of the details of the labor practices being satirized here are very similar to what Ben Caldwell and Mark Russell presented in Prez, given that the target is the same. But Simone and Calafiore’s work lands a lot harder because they resist the candy gloss of self-aware parody. We’re seeing just how ridiculous the demands of the workplace are and how dehumanizing they can be when a superhero with speed powers is ruthlessly drubbed out.

The big idea shining through the story is that while a monster — whose appearance is an intriguing wink at the Fantastic Four’s debut cover — turned them all evil, the city was never what it presented itself to be in the first place. From Fleet’s perspective, the cataclysm was only remarkable for being the last of the many disasters that befell him.

Surviving Megapolis picks up across the bridge, where the former heroes are vilified and the protagonist of Leaving Megapolis, Mina, is presumed dead. She isn’t. She’s been right under the nose of her would-be killers the entire time, but the presumption of her death provides the focus for the issue on the topics of heroism and martyrdom. The media and general public see her as a hero for sacrificing her life to get people out of the affected area, falling to her apparent death from the bridge. And some of those closest to her argue that she would reject the title and dismiss the accolades.

The most intriguing element of the discussion, and the real centerpiece of the issue, is a flashback to Mina and a childhood friend Cody at a comic book store. They are there arguing over a superhero called the Crimson Shadow, who basically looks like a monochrome version of the Jim Lee Daredevil design. Mina’s critiques of Crimson Shadow echo the typical shots taken at Batman or The Punisher: that he doesn’t do what he does to be a hero, that it’s just a campaign of revenge. Cody defiantly states that he likes both that and his constipated expression. Mina thinks a hero should show mercy. Cody does not.

I’m not typically a huge fan of worldbuilding that includes comics about superheroes in a setting with superheroes in it, but Calafiore and Simone are going a long way to redeem the inherent corniness by avoiding the same old cracks about those kinds of comics. There’s a counterpoint in Cody, which we’ll have to stay tuned to see unfurl. And there’s also the question of just where Mina stands on that idea now that she’s been living behind enemy lines, sorely tempted to pull the trigger and kill one of the former heroes from a safe distance. The basic structure is built from pieces that we’ve seen many times in the past, but there’s a rare willingness to engage with the grit and grime of the post-Watchmen era that more than justifies it.

Jim Calafiore is a no-brainer collaborator for Simone given their long and winding travels together on Secret Six, but his work is particularly suited to the Megalopolis world. What’s really marked Simone’s artistic collaborators across both volumes of Secret Six is the distinctly and intentionally unpleasant elements of their styles. Secret Six is a title that was created with the intention of exploring the transgressive and the types of otherness that it attracts. The sharp edges — both literal and otherwise — in the artwork always served to solidify the preternatural element. It was always meant to be alluring in a certain sense, just not to normative appetites.

With Surviving Megapolis, Calafiore becomes an intriguing stylistic counterpoint to Jon Davis-Hunt’s work with Simone on Clean Room. Megalopolis is a clear, classic dystopia in the sense of being a deeply broken world that joy — in sex, violence, or just about anything — has fled. Calafiore builds up a world defined by entropy and decay in the jagged edges and deep blacks of his inks while Davis-Hunt creates a completely opposite vision of a world where violence and death are the most seductive forces of all.

Simone appears to be kicking off the year by charting two very distinctive and equally welcome paths into the darkest impulses of humanity, but I can’t help but want something a bit fluffier from her down the line, like a few issues of My Little Pony. I bet she’d be great at Applejack.