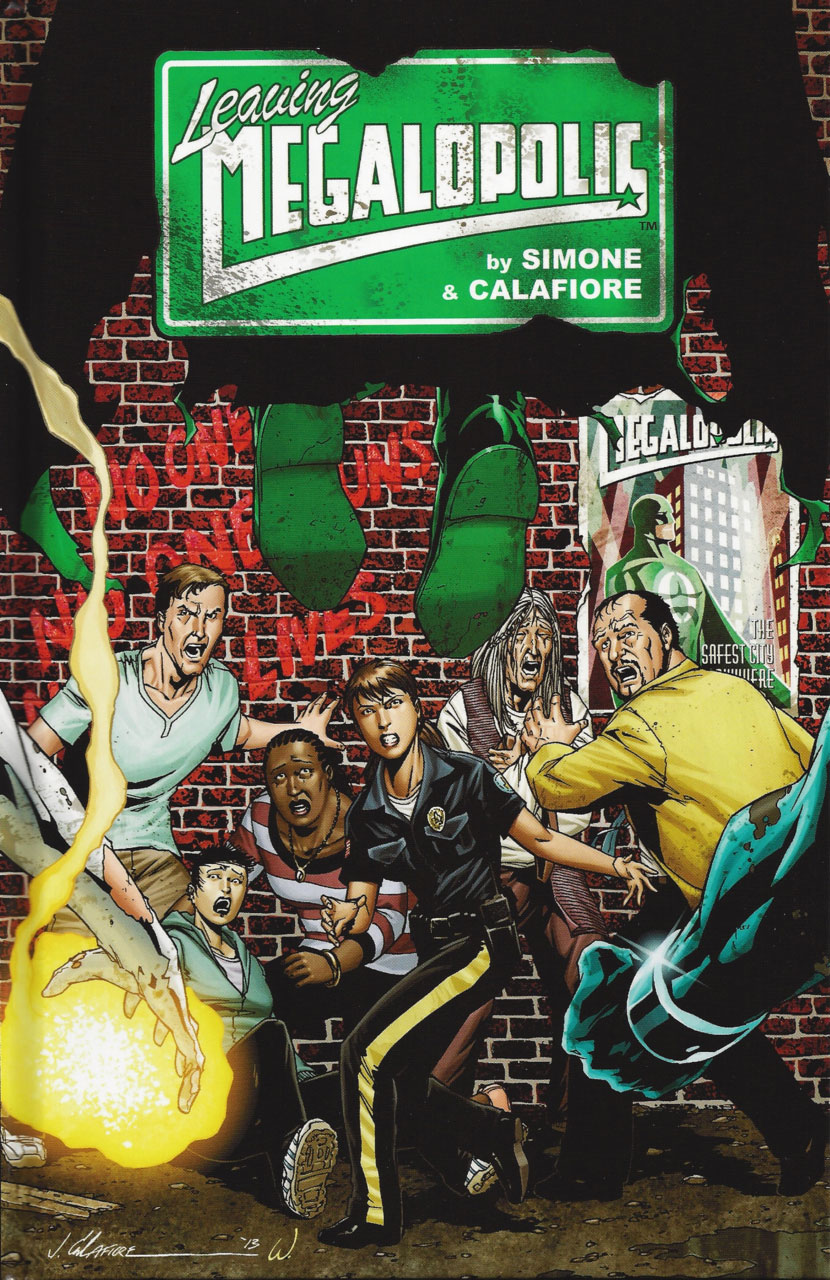 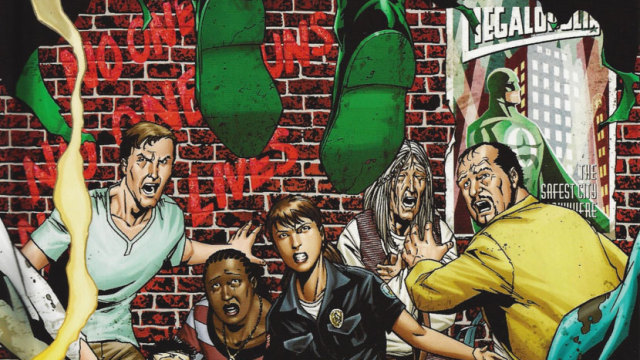 Self-published by the creators via Kickstarter
Release Date: November 2013

Something bad happened in Megalopolis. Something really, really bad. Something so bad that it turned the safest city in America into an open wound populated by dozens of insane, murderous former super-heroes. And the best the remaining citizens can do is survive — and that’s not going to be easy.

Leaving Megalopolis is the comic book love child of Secret Six creative team Gail Simone and Jim Calafiore, completely unfettered by publisher or editorial control. Funded and released exclusively (to date) through a Kickstarter campaign, this 108 page original graphic novel introduces an entirely new world and cast of characters to the reader with the kind of depth and gruesome nuance we’ve come to expect from the creative pair. At the center of the story is Mina, a young woman who may have once been a cop, and now is on the run from a super-hero massacre like everyone else. Simone’s handling of Mina’s back story through flashback ensures that this isn’t just going to be another momentary devastation survival tale, but merely a blip in time across the entire life of these characters. It’s a subtle distinction, but one that immediately encourages the reader to connect with Mina — and by extension, the other survivors — more deeply, to experience their risk down to the core. The sense of history untold is sincerely palpable on the page.

Simone, of course, does what she does best throughout this volume, delivering smart, diverse characterization amidst a rubble of downright disgusting situations and shocking events. In just a few short pages, we’re treated to a host of survivors, none of whom probably should be trusted — and yet we do. And more to our error, which is all part of the fun of the graphic novel. From Suicide Squad to The Walking Dead, readers are used to having the rug pulled out from under them when it comes to life expectancies, but Simone both relies on and undermines that audience expectation, so that we really can’t begin to guess what’s next.

Page after page of Jim Calafiore’s art reinforces the personal connection we have with the main cast, as he illustrates what’s possibly the strongest work of his career. The artist’s handling of every face renders each cast member unique and discernable, despite the lack of any telltale costume or radical super-hero accessory. The sense of weight that rests on the backs of everyone in Megalopolis, even the heroes gone mad, lends just as much drama to the unfolding tale as the events themselves. And if you love metropolitan devastation (not to mention a little disembowelment here or there), then this is the book for you.

If nothing else, Leaving Megalopolis only begins to scratch the surface of the history and storytelling potential of this brand new world, with serious potential remaining in both the ongoing story as a whole and smaller vignettes, such as with Calafiore’s included solo story, “Wonderboy.” One hopes for opportunities for wider distribution (some comic shops took advantage of retailer offerings via the Kickstarter campaign, but I’m sure those were few and far between) so more readers get to experience this brilliant universe of characters. And new stories of the same wouldn’t be too shabby either. If this first volume is any indication, Simone and Calafiore both have a bright future, full of the guts and glory we’ve all come to love from them, in creator-owned comics. The sooner we get to see that future, the better.