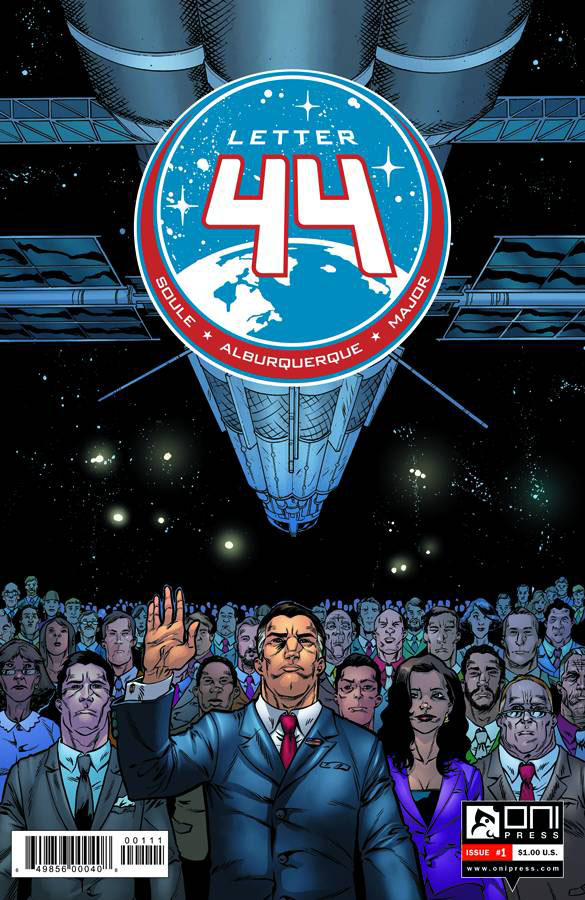 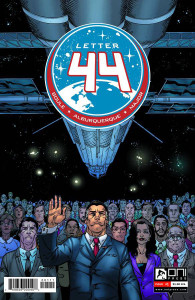 I cannot recall the last time the premise of a comic so desperately cried out for a big-budget TV adaption like Letter 44 does. The newly elected President of the United States learns, upon having received a letter from his predecessor, the former President not only knew about the existence of an extra-terrestrial presence… but also began to get ready for their arrival.

Charles Soule (Strange Attractions, Swamp Thing, Red Lanterns) has created something fascinating in Letter 44, because it so beautifully provides the reader an outlet for the kind of fantastic story we long to be real – a foreign war where we shore up military veterans for the upcoming invasion. The policies we cannot understand ourselves, as we exist on the domestic side of the looking glass, are all working towards a greater, grander goal. It is as much a comic fantasy to believe a President of the United States jeopardized his public standing to get ready to fight aliens, as it is to believe one of those aliens landed in Kansas to be raised by a kind, elderly couple.

Still, the premise is no less fantastic, no less grand, and no less important for our times. Superman’s arrival of Earth seized the sci-fi genre’s greatest troupe (alien!) and through it re-defined the American, populist hero. Letter 44 takes the idea of aliens and through them we gain a new understanding for what politics, and the politicians we accuse of often being too tied up in the subject, should be: somebody that defends the people.

Think “The West Wing” meets War of the Worlds.

The story focuses upon the new President, Stephen Blades (possibly the most retro sci-fi and yet most American name ever), who finds his Administration has created a space vessel known as the Clarke. Aboard the Clarke we meet various scientist and military crew members, all of whom are risking their lives to see precisely what it is that the United States government is so panicked about. By the last panel, if you are not giddily excited about the scope of this comic, I have little else to say that will make or break your opinion. I cannot think of anything so widely different that has also packaged such unique characters, unique perspectives (the President as the seemingly main character?) and with such honest playfulness of spirit.

Oddly, the only fault Letter 44 has is that perhaps it moves too quickly into the new administration without at least some perspective of how “bad” the previous administration under former President Carroll was. We are given some hints as to the criticisms against Carroll, but they feel too light. Still, the book does move quickly into the so-fun-to-read premise that any lax efforts on world-building the US “before” the Blades Administration can be forgiven.

In regard to his choice to include the President of the United States in the narrative, Soule says, “For me, it’s partly about the characters — all of whom I love for different reasons, even the expendable one — and partly about the story I’m telling here. Letter 44 is structured to have escalating reveals that will change the game again and again.”

The comic’s amazing premise is coupled with the artistic skill of Alberto Jiménez Alburquerque. I find it particularly hard to offer any insight as to the style of Alburquerque’s drawing of the characters, because everything in the comic meshes so well. A recent film review I read about criticized the film score because it was so recognizable as being the work of a particular musician. I can say that no aspect of Letter 44  pulled me out of the reading moment and that the art style represents every character faithfully according to the needs of the story.

Go and read Letter 44. Read it, feel captivated by big-idea storytelling, and join me in longingly starting at the calendar every day until the next issue is released.