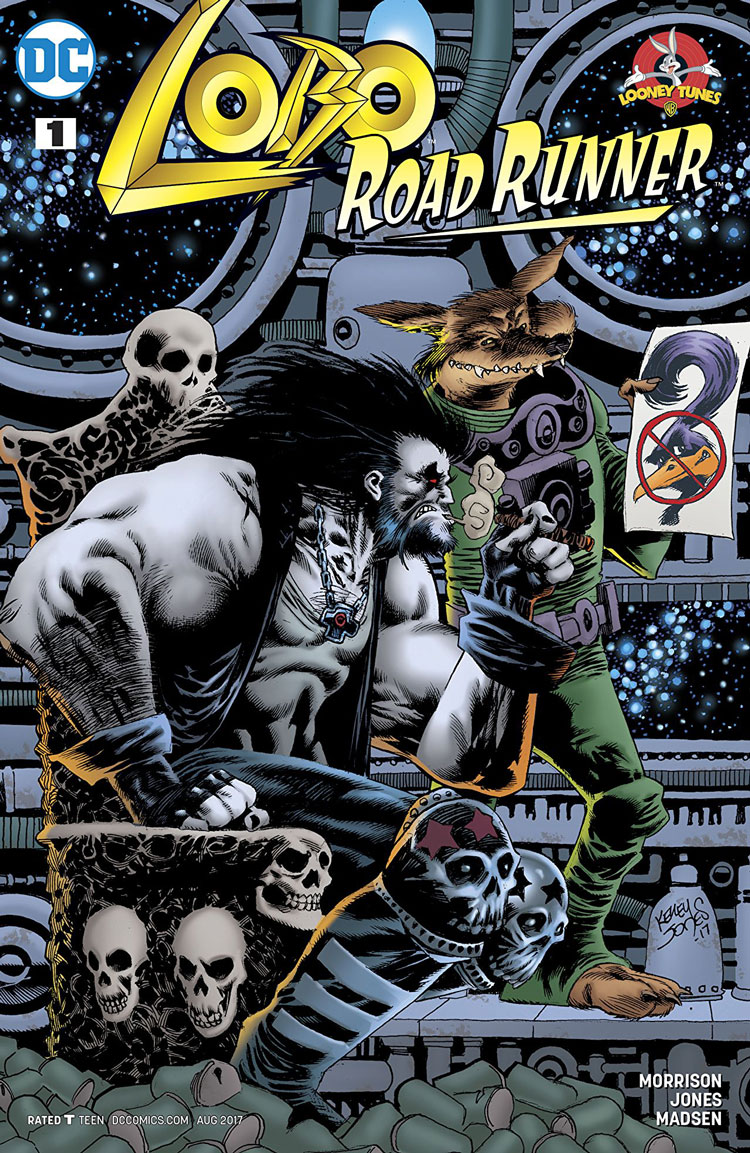 Where did Wile E. Coyote and Road Runner come from? Well, we get to see not only their origins, but their exploits, from Earth to the galaxy. Decades later, they both have run ins with the Main Man himself, Lobo. Even with a slightly darker story, hijinks are aplenty and there’s a few guest stars for both Looney Tunes and DC fans alike.

This story is corny and it is absolutely excellent. I love the idea of any kind of mashup, so to see the Lobo/Road Runner Special have the comic violence of Looney Tunes and the gruffness of the famous Czarnian, and the fact that they work well together, was a truly unexpected treat. I’m amazed how the old school violence of the popular cartoons translated to the comic medium, both through the art and dialogue, the best of which is in the back-up story by Bill Morrison and Saida Temofonte.

Morrison takes science-fiction conventions, like aliens, gene-splicing, and experimental procedures, and combines them with a rather lighthearted comedy in this take on how the Coyote and Road Runner came to be. Where this story could have easily leaned too far in either avenue, it instead manages to convey grittiness without portraying the core element of humor. Morrison’s use of Looney Tunes lore shows up in quite a few places. Sam the shepherd dog is one of the major players of the story, and the emergence of Wile E.’s sophisticated speech is reminiscent of the episodes Operation: Rabbit, his first speaking appearance, and To Hare is Human.

Lobo’s appearance doesn’t break from the comedic or sci-fi elements of the story, allowing him to create a new twist on these frameworks. His interactions with Road Runner are right out of the original cartoons, and Morrison creatively uses the Main Man’s ability of regeneration to fit the goings-on. In the both the main and back-up story, where Lobo is front and center, breaking the fourth wall is less burdensome than amusing. Bugs Bunny’s role in the story maintains the Looney Tunes presence, and Road Runner’s final moment is one that sells the entire story.

Morrison on the back-up story gave this Special a chance to be unabashedly itself. In these last eight pages, the art is sillier and everything about the story becomes no holds barred. Lobo is the perfect vessel for such a tale as he talks to the reader, references reality, and has to deal with the fact that the world will always treat Road Runner better than any predator. Morrison’s art takes us back to the heyday of DC animation, bringing together the Looniest of Tunes and the golden age of one of the best animated universed.

I’m not sure how Kelley Jones creates such a delightfully sinister universe, but this art provides a wonderful interplay with the funniness. Wile E., Sam, and the slew of aliens and robots that appear have an almost foreboding presence, undercut by many of their slapstick actions. Kelley’s realism, while still borrowing the fantastical parts of cartoon violence, almost works like a parody, staying in line with the grounded parts of the plot without losing what makes the issue humorous.

At first glance, Michelle Madsen’s colors appear grim, but they end up being a witty contrast to the rest of the story. Madsen makes you feel like you should take this story completely seriously, as though it is supposed to take beloved cartoon characters and give them the good ole dark spin, and I love that this effect is at odds with the rest of the issue. This foil between plot and appearance intensifies the comedy and makes the issue that much more enjoyable.

Lobo/Road Runner Special is truly a delight. This series of comics is going to be a nice break from DC’s line, poking fun at the capes while letting the cartoons have fun. The illustration and writing coalesce to create an engaging read that capitalizes on the irony of shady origins as the method of humor. None of the characters are overbearing and this final product is an enjoyable foray into seemingly disparate themes and mechanics of storytelling.