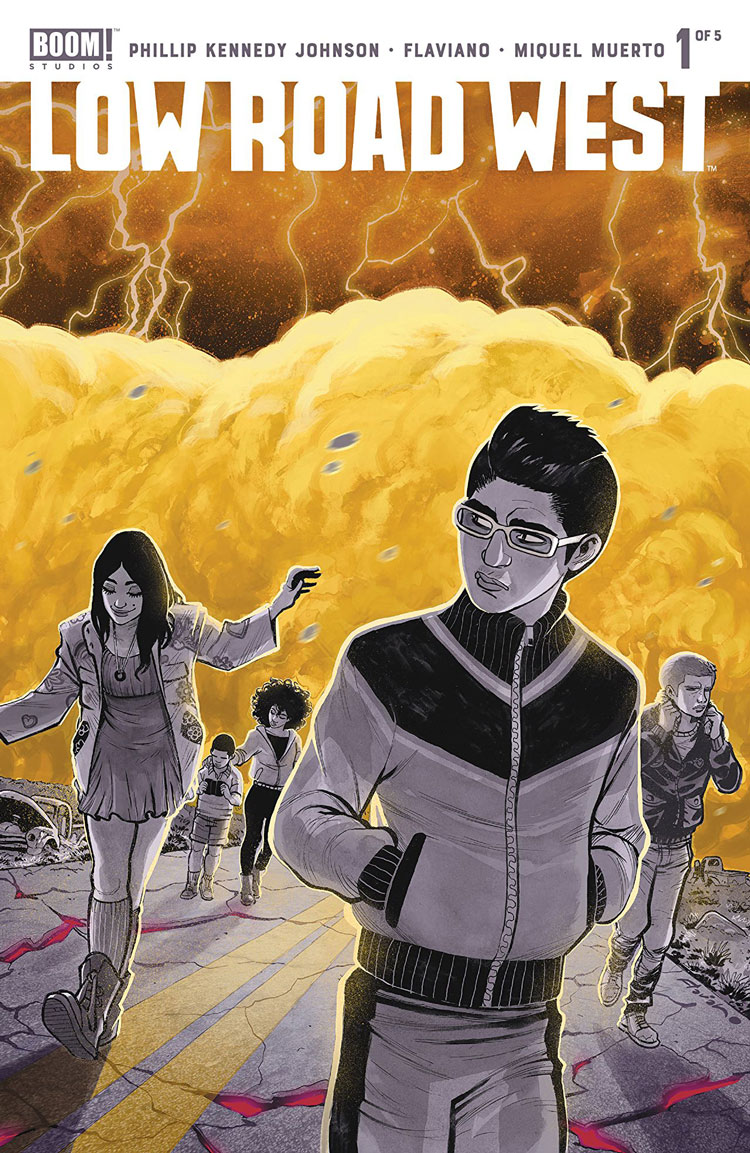 Low Road West is not what it seems at first glance and that is a very good thing. The creators surprise the reader with a number of mysteries that are framed with interesting characters and great artwork. Though the main characters in the story are children, it is easy to identify and empathize with them which invest the reader’s heart and mind in the story.

Phillip Kennedy Johnson has taken what could be just another trope-y dystopian story and hooks the reader with just enough open ended questions. There are plenty of times when the reader may think they know where the story is going but is suddenly left surprised by what actually happened. Better than this end run around preconceived notions is the amount of mysteries the narrative presents the reader with.

There are a number of genre switching elements in this story that don’t fit into the aforementioned dystopian trope and keeps the reader from slipping into a casual read through. Johnson has done a great job at making the characters truly interesting, which is a given usually but sometimes children as main characters tend to be simplistic.

The kids in Low Road West all seem to have a very interesting back story which is displayed by the conversations and reactions to the situation they are in. Although it may seem a given that kids would be likable characters, this is not always the case. Johnson succeeds at making this kids likable and allowing the reader to emphasize with them. Overall the story is well constructed and has plenty of intrigue that is sure to bring back readers for issue #2.

Flaviano does an awesome job at bringing the story to life with his illustrations. His work fits the characters perfectly while still maintaining the seriousness of the situation they are in. Everything is presented from a child’s perspective which brings the reader into the story making them a participant rather than just an observer.

All the characters have their own unique look to them which helps the story remain clear for the reader. Even though this is a story about kids, the situations they are in are far from a children’s story and Flaviano handles this innocence versus reality clash nicely. He creates really impactful moments with the harsh reality of the kid’s new world.

Miquel Muerto provides an expert coloring job for Low Road West. He uses very muted colors that gives the story an almost monotone feel to it. It reflects the feeling of death and decay that hangs over this world. The tones adjust appropriately as the kids move into danger towards the end and then make a flip onto the cool side as they head into mystery. It drives the mood of the story perfectly and definitely moves the emotions of the reader.

Jim Campbell as always does an excellent lettering job. The style matches the tone of the characters and remains consistent throughout. It’s also a style that is very comfortable to read which keeps the lettering in the “background” while the artwork stands out more.

Overall, Low Road West is a very intriguing and enjoyable story for a first issue. It takes the reader to a place that isn’t expected at first glance. The creative team has done an excellent job at putting the reader in this journey along with the kids and that is a win for reader and creator alike.