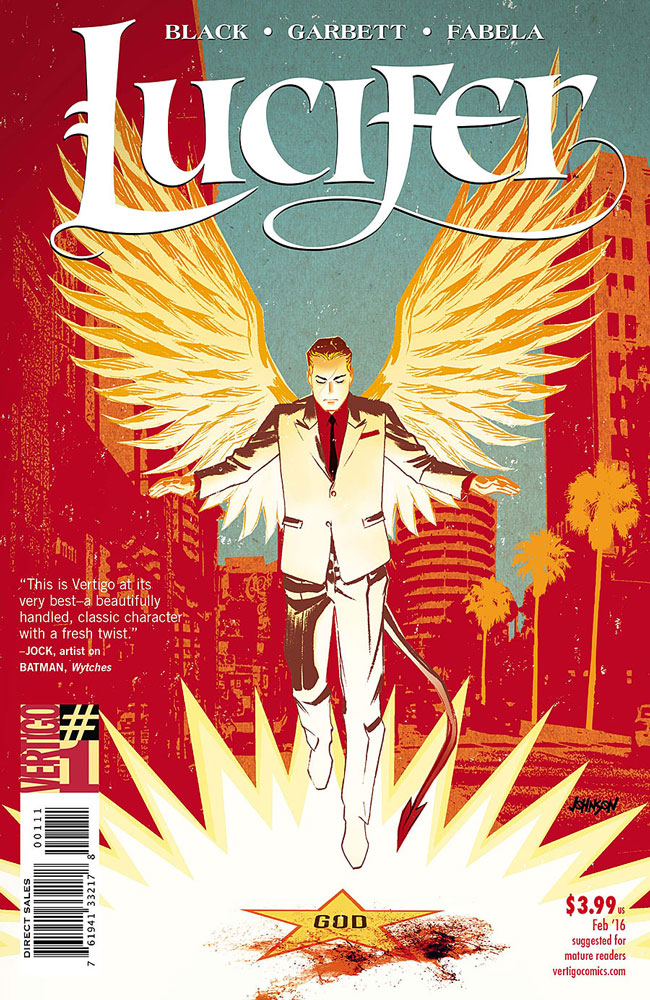 The Prince of Lies is back on earth, and prime suspect in the greatest murder in all creation. Only trick? He really didn’t do it. Now it’s up to Lucifer and one of his very mortal enemies to find out who did, and not bleed out from his own mysterious injury in the process.

Lucifer was never the book Sandman was in the grand scheme of things. It sort of was like the Jan Brady of the Vertigo set. It was never regarded to be as groundbreaking or unique as its older sister, but still popular enough to tell its epic story across 75 issues and end with what some fans consider a picture perfect wrap-up. And yet, here we are, in 2015 with a television show on the way and a brand new #1 picking up where the old book left off.

The truth is, as a protagonist, Lucifer is every bit as compelling to the reader as he is to the characters around him. His aura is unmistakably sexual. He’s got a distinct air of disdain about him for pretty much everyone else, and that only makes me want to see more. The scar now cutting his beauty in half only serves to accentuate the glory of what remains. It’s uncanny. And a testament to how right Holly Black and Lee Garbett are getting him, and how clean the delivery is in a number one released nearly ten years after our last exposure.

Black draws us in pretty much immediately with the omniscient narrator describing the angel’s return, and a compact summary of Lucifer’s last appearance. It’s a key place for the new series to begin and attract its new (and like myself, poor memory-stricken) readers, but doesn’t feel pedantic. Part of that is how Black and Garbett are setting the mood immediately for the reader, treating Lucifer’s return almost like a cold breeze coming in off the water, adding a chill to everything it grazes.

Garbett’s style throughout, paired with Febela’s warm toned palette, is clean and sharp, further accentuating the beauty in every character, even the somewhat disturbing ones. His own inks are crisp, giving most figures a slightly darkened outline, but not ignoring some opportunities for gorgeous line detail in Lucifer’s wings, hair, and the stubble on poor Gabriel’s face. None of it feels dirty so much as alarmingly precise, giving me a nice sense of background danger that I can only imagine wafts off the ill-begotten Prince and his comrades.

Also, I know we don’t point out cover art nearly enough as reviewers, but DAMN. The masterpiece by Dave Johnson that adorns this book is suitable for framing immediately.

I’m super fascinated about the set-up Black has provided and already find myself in love with the central figures, not to mention the final page reveal that had my mouth drop just a little bit. I know “they” say you can’t go home again, but I kind of feel like whoever “they” are, they don’t know Lucifer. Black and Garbett do. And I’m definitely on board for the long haul.