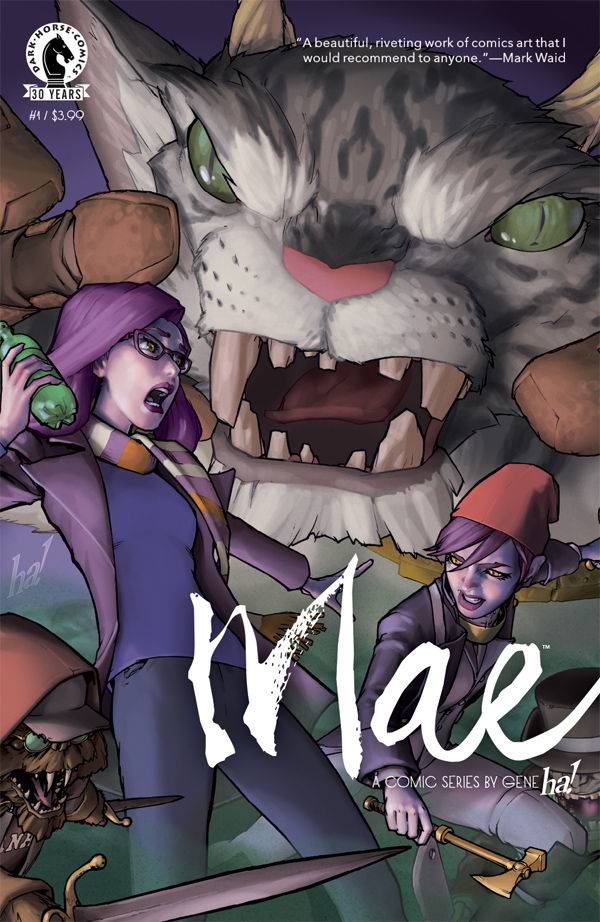 Sometimes, a little bout of sibling rivalry can make you feel like your sister is from another planet. Rarely, however, does it actually turn out that your sibling is a world-hopping explorer and warrior. But, if you ever need a story to convince your parents of your sister’s escapades, just show them a copy of Mae #1 from Gene Ha, and you’ll be good to go.

If you ever enter your sister’s room and find a secret stash of gold scarabs, warrior garb, and other exotic items, you might have the first tip-off that she is not all that she seems to be. Mae has grown up, burdened with her sister’s oft-absence from her home. Every time her sister leaves, she has no clue how long or where she has gone off. When Mae and her friend Dahlia reconnect with Abbie during Mae’s college years, Mae finally learns the adventurous secret Abbie has been hiding her whole life. All of Abbie’s stories of world-class expeditions and swash-buckling heroics in a fantasy realm turn out to be true. Mae and Dahlia become embroiled in Abbie’s latest exploit, and it seems an adventure most-exciting is on its way to unfolding.

Gene Ha has nothing but magic to offer his readers. It’s clear that this is his story, and that he’s having a blast telling it. Every character feels well-cared for, with plenty of room for growth and swerving narratives. It’s refreshing that he has kept his cast small, so far, allowing each of the three characters to bloom accordingly throughout the first issue. The story, an over-sized issue, plays out incredibly smoothly; I found myself on the last page without even realizing how much time had passed. I was overall engrossed in the story being told, mostly driven by how relatable the characters are. It seems that there’s something for everyone with three different personalities to behold. I was sold on the intelligence of the characters and the real human emotions they displayed. The dialogue is, overall, witty and fun. Though, despite the fast-paced exchanges, I sometimes found word choice jarring. The issue feels at once adult and YA (or even all-ages), which can sometimes lend itself to an out-of-sorts with the writing.

While the story itself is bombastic and exhilarating, the art takes it to whole new levels. Think “Mario dons the raccoon suit and flies above the clouds” new levels. For one, I was floored by the coloring, the purple hues provided by Gene Ha and Rose McClain providing a fantasy element spattered throughout which reminds the reader of the crazy adventures that have passed and are to come. The story sequences are easy to follow as each character is dressed in eye-catching discernible ways, their unique wardrobes providing beautiful visual cues on an already colorful landscape. Facial expressions are spot-on, action is exciting, and the art, on the whole provides a charm not always found on the pages of comics. I especially loved Zander Cannon’s lettering (which looks hand-lettered). The stylistic dialogue brought a sense of energy to the book that kept even the quiet moments bustling with emotion.

Mae #1 tickles your sense of adventure for a fast-paced ride into the unknown. Gene Ha has written and illustrated a story that I can’t wait to get more of. Mae satisfies my need for exploration while also digging into the unconditional love siblings bare for each other. Don’t pass this one up if you’re a fan of donning your expedition cap and trekking headfirst into strange exploits.