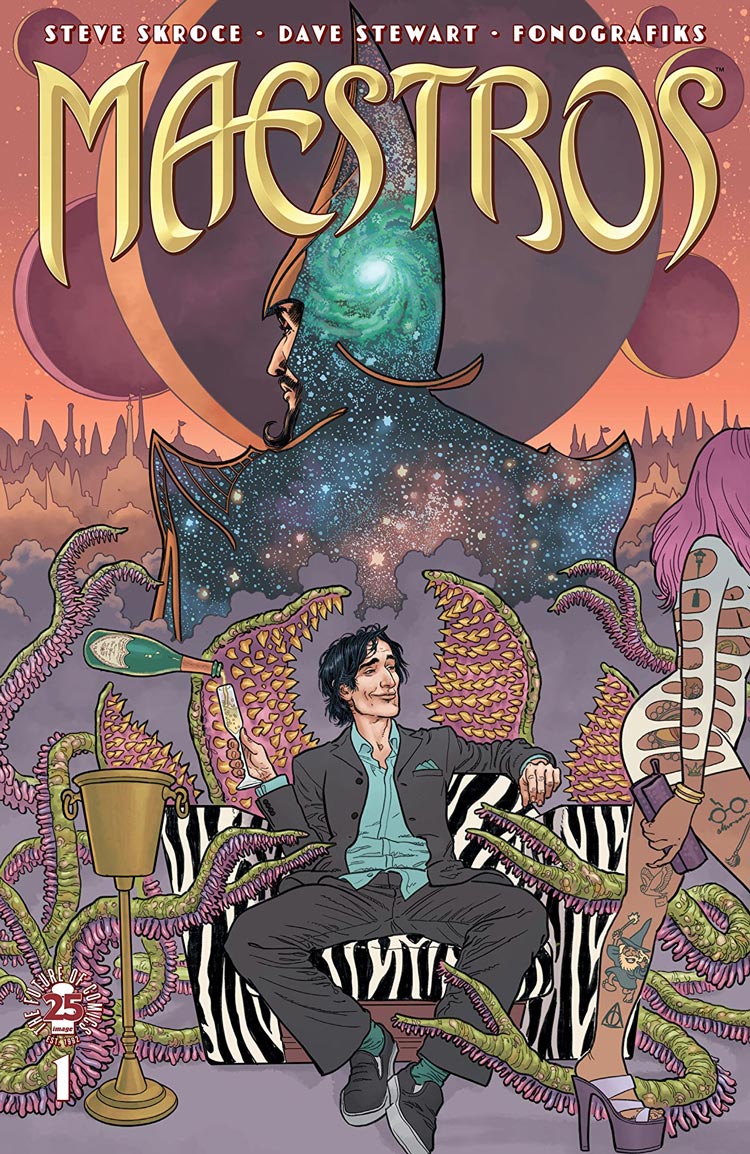 Combine Harry Potter, Camelot, Percy Jackson and recent comics Saga and Curse Words and you get something like Maestros. Chances are if you like any or all of the aforementioned sagas then you will love Steve Skroce’s new book.

Even if you don’t, then you should still pick up Maestros to discover a new take on what you may have read before. With Maestros, Skroce demonstrates his true expert level conducting skills at weaving together a story and artwork that leave the mind yearning for more.

Maestros as a story isn’t a new and original tale. It contains many of the standard tropes and themes found over and again in the wizarding genre. In fact, it may just contain all of them. Fortunately, they are all melded into one story that works perfectly.

The best part about Maestros is Skroce’s rich world building that seems to come at you from every part of the book. From page one, we are thrust into a beautifully visceral alien world of magic, decadence, and violence. The history and current state of this world is dished out in bits at a time that give the reader a chance to take in the information, as well as enjoy artwork that is nicely paired with the story.

Skroce’s character building works well especially for the main players. At first you may think you already know the characters as they are introduced, however, the dialogue reveals that they have more depth to them. Not much time is spent with the main character Will as he is now, but there are flashbacks to give us a peek at his current state of mind.

The story also has a good sense of humor to it that will keep the reader smiling throughout the story. While much of the dialogue deals with serious things, the tone almost always has a Monty Python-esque vibe to it.

As chaotic and diverse as the story elements are that Skroce presents the reader with, he has done an equally masterful job at illustrating them. In every panel, there is so much going on but the reader does not get lost or overloaded with information. The details don’t overpower the storyline, but add to it. A second reading will reveal anything you might have missed the first time, through.

The character and costume design throughout the book are a wonder to behold. From the first page, I knew that this book was going to be something special due largely to the artwork. Each character looks unique and their facial expressions successfully convey what they are feeling at any given time. In fact, the art and characters details are so good the reader could get the story without the use of text.

The costume design is fantastic! Everyone has a great look to them and the clothes are rendered exceptionally well. Dave Stewart does a perfect job at bringing everything to life and kept in balance with his colors. The main characters of the first issue, Margaret and Will, bring a nice stark contrast with their black and white outfits making them stand out against the colorful cast of supporting characters.

The lettering and design is done by Fonografiks, who previously worked on Saga, and has brought some of the feel of that popular book to this story. It fits perfectly.

If Skroce can continue to be a “maestro” with his book and keep things from spinning out of control then readers are in for an epic ride. There may be reused themes in the story but in truth all stories have been told thousands of times before.

The mark of a good story teller is to present the reader with something they have encountered before as something new and interesting. Skroce has done this with the first issue and the reader will be left excited to see what comes next.