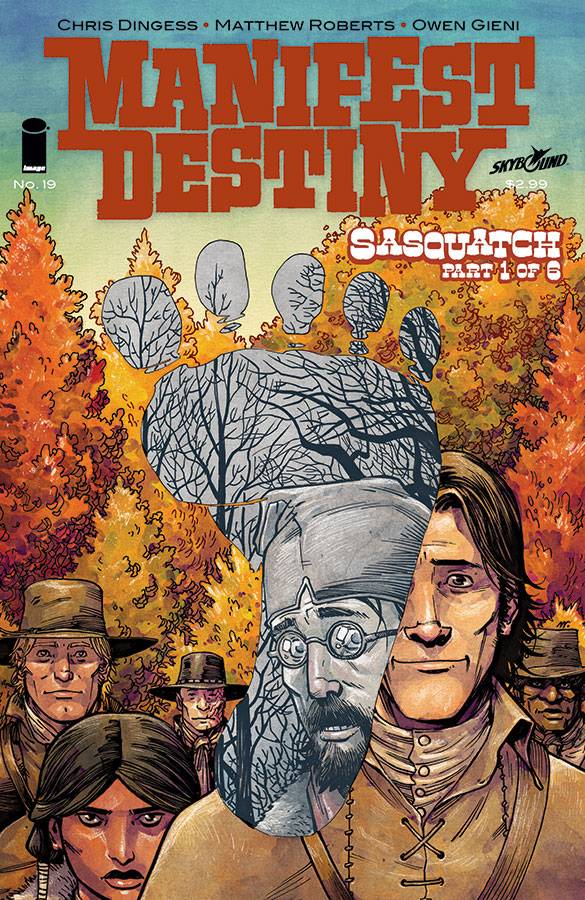 Full disclosure: I hated history class throughout my academic career, with the exception of Art History, which I aced all three semesters of, but the other history classes…bored me to tears. Evidently those history classes only needed to add in things like bison Minotaurs, Fezron, giant mosquitoes, river beasties, and Sasquatches to get my attention, as Manifest Destiny has done since its first issue.

Written by Chris Dingess and drawn by Matthew Roberts, with inks from the tag-team of Tony Akins and Stefano Gaudiano, colors from Owen Gieni, and letters from the masterful Pat Brosseau, Manifest Destiny #19 presents the first part of “Sasquatch.” Billed as a six-parter, like every other arc of this series to date, this one appears to be a tale that seems ready to dive into the heart of one of the greatest mysteries of the Pacific Northwest. It also brings back the reason President Thomas Jefferson reached out to Meriwether Lewis in the first place.

Of late, Dingess has been juxtaposing a failed expedition with the current journey Lewis and Clark are on, adding in foreshadowing and reflections to season the “present day” (being 1804) story. As Lewis, Clark, and their charges forge deeper and deeper into the unknown, the tales captured in Helm’s journal serve as warning to the reader to buckle down, even if Lewis and Clark seem predestined to repeat the mistakes of their predecessors. Helm’s memoirs take more space in Manifest Destiny #19 than Lewis and Clark are given, but Dingess makes that story worth the while and worthy of the space it consumes. The writer gives the characters surrounding Helm different personas to separate them from cast of Lewis and Clark’s party.

Matthew Roberts’ work is wonderfully solid throughout Manifest Destiny #19. Even though he is accompanied by two inkers, his work is smooth and consistent, thanks to his clean storytelling and believable (but exaggerated) and diverse figures. It is quite possible that Akins and Gaudiano split the chores when the story shifts from Helm to Lewis and Clark, or maybe the transition between inkers is less due to the inkers themselves and more to the fantastic colors from Owen Gieni. Roberts and Gieni work nicely together, helping establish consistency and temperature throughout Manifest Destiny #19. In addition to conscribing the right tones and temperatures for the figures and their environs, Gieni has an uncanny knack for providing just the right shades and hues for the cryptoids that share the pages of Manifest Destiny #19. Regardless of the colors selected, every choice the colorist makes works within the story and the timeframe.

Adding a parallel sheen to the visuals of the books, Brosseau’s subtle text and “parchment” differences between Captain Helm’s journal from 1801 and Meriwether Lewis’ 1804 observations tell the story in a subtle way. It’s easy to dismiss as both journals have handwritten (at least in appearance) fonts and parchment backgrounds, but closer inspection reveals different tones in the paper and ink as well as different pitches in the lettering.

While Manifest Destiny might not be completely historically accurate in the underpinnings of life on the frontier, regardless of the beasties the crew encounters, the creative team of Dingess, Roberts, Akins, Gaudiano, Gieni, and Brosseau certainly make the adventure feel authentic. Every issue is a new calamity, steeped in new challenges, successes and losses, but all of it believable and surrounded with well-constructed context. And each issue leaves readers with a final scene that teases more, but leaves only a back cover to be closed, as readers are left to count down the days until the next. My only gripe about another riveting installment of Manifest Destiny is the fact that there simply isn’t more, either more pages or a more frequent release. I’m thankful for what I get, but each installment is so gripping that I just want the next.