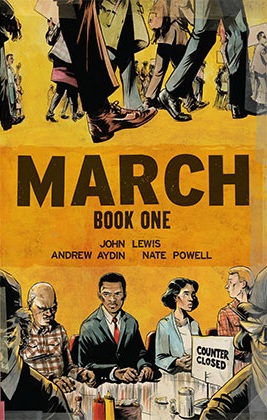 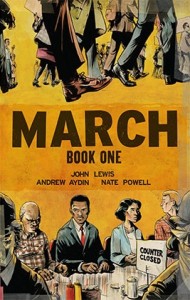 You need to read this original graphic novel.

I’m not sure I even need to say more than that, but I will. March is unlike any other comic on the market today, telling an amazing historical story in an absolutely brilliant way. The story of John Lewis is an exceptional one to read, all at once heartbreaking, inspiring and jaw dropping when you look at what this man has gone through. With help from co-writer Andrew Aydin, his story is told in a very conversational manner, like we are simply sitting down for coffee and hearing this legend’s tale of growing up in the South. Book one of March focuses on Lewis’ early years, including his first meeting with Dr. Martin Luther King, Jr. and his first sit-ins. The series is building toward the historic March on Washington, and the tension of the time period is felt in every single panel of this graphic novel. This was a turbulent time for America, and Lewis & Aydin do a fantastic job of conveying the feelings that were in the air during this era of radical change. I applaud the writers for not glorifying this time period or demonizing it: this is just the tale of what Lewis experienced, laid out as fact, not political opinion. While co-written by a politician and discussing many political themes, this graphic novel is not presented as a polarizing political piece, but rather a historical look at a critical time period in America. The conversational style of the dialogue and narration is fantastic, making this an easy read that flows beautifully, pulling readers in and never letting go. I will admit to having no idea I would be as engrossed as I was in this story, as I ended up being unable to put this comic down. I simply could not stop myself from reading it in a single sitting, soaking up every single word, completely absorbed by what was occurring on the page.

As gripping as the script is, Nate Powell’s art takes this project and makes it soar. Powell’s artwork is flat out fantastic and his style suits this work perfectly. He does an absolutely amazing job of laying this story out in a visually interesting manner and uses shadows masterfully throughout the collection to create tension and evoke a huge amount of emotion. There are several pages in March: Book One that are jaw dropping, the kind of pages that make you take a double take simply to absorb the emotional power leaping from the page, and this is, without a doubt, some of the strongest storytelling I have seen from any artist this year. Powell’s art pulls readers into Lewis’ world and never lets them out, taking us on an emotional journey that hits harder as the story progresses. Powell’s art is Eisner/Harvey/whatever-award-you-can-think-of worthy and is not to be missed.

March: Book One is a work of art that should be used as a teaching device in every school in North America. This is a brilliant original graphic novel that is a must read for anyone who enjoys the medium, and a fantastic bridge book for many who have not read comics before. This is as good as it gets and is a brilliant showcase of the power of the medium to tell powerful stories. I cannot wait to get my hands on the next book.