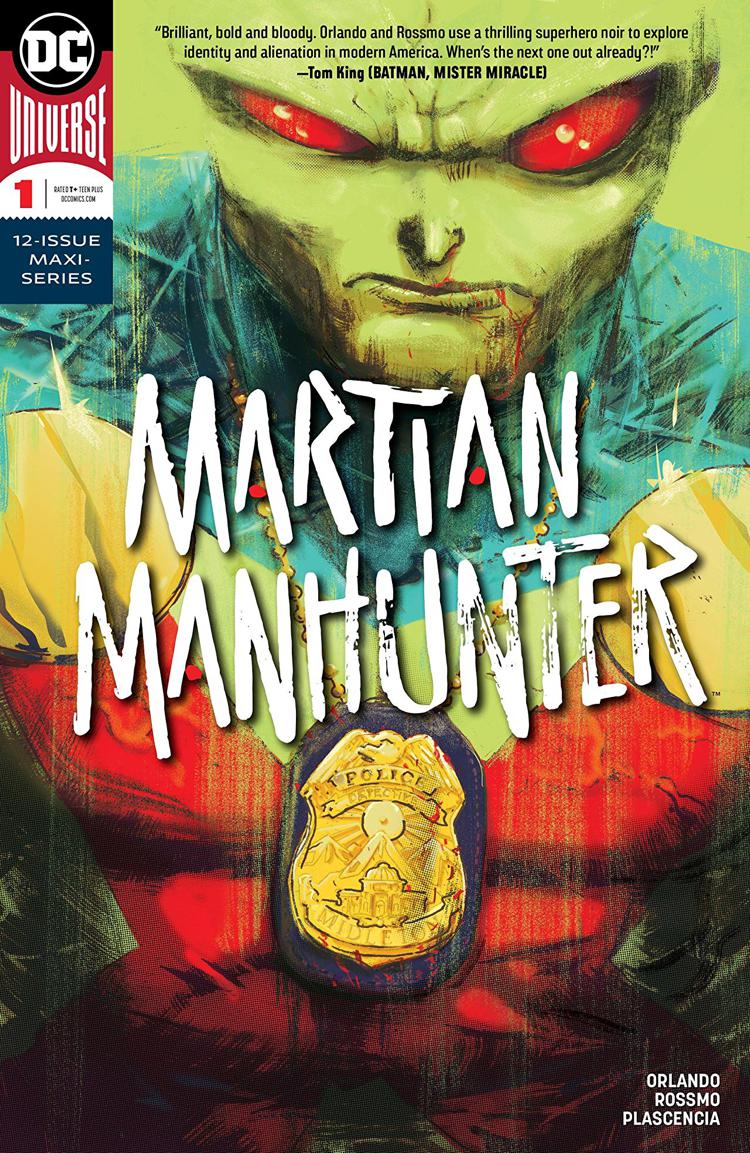 J’onn J’onnz was a corrupt cop on Mars before his world burned. Now, in his new life on Earth, a gruesome murder will bring his past back to haunt him.

Martian Manhunter #1 follows two plots, one taking place two years ago in Colorado, the other occurs an indeterminate amount of time ago on pre-destruction Mars. On Earth, John Jones is a homicide detective investigating a brutal double homicide with his partner, Diane. On Mars, we get a glimpse into J’onn’s family life, as well as how he operated as a manhunter. The two plots are linked as John/J’onn begins to see visions on Earth out of his past on Mars.

I will confess up front that John/J’onn “The Martian Manhunter” Jones/J’onnz is not a favorite of mine. Back in the Silver Age, heroes in general, DC heroes in particular, tended to have a pretty uniform Generic Heroic Personality, with essentially no traits of note beyond “if something bad is happening, it’s my duty to fix it” and “paralyzing fear that somebody might discover my secret identity, and a willingness to go to great lengths to preserve said identity.” Martian Manhunter, a product of the Silver Age, was no exception, but while most other DC heroes grew out of their Generic Heroic Personalities, J’onn’s, for the most part, stuck. He’s been the “straight man” in the JLI and the Team Mom in various iterations of the JLA, but there’s never been a version of J’onn J’onnz that, if you’ll pardon my insensitivity, set my world on fire.

I’m not sure 2018’s Martian Manhunter is there, quite yet, but at the very least this first issue offers the possibility of getting J’onn to a place where I’m genuinely interested in his stories. Here, we see him in the present as a friendly, jokesy cop with his partner, albeit one who’s haunted by his past. And, on Mars, we see him as a gruff, corrupt law officer trying to keep his under-the-table dealings a secret from his family. And, most importantly, the Mars stuff feels genuinely weird and alien.

The depiction of Mars is just so strange and intriguingly odd. So much of it is unusual and unexplained, from “social shapes” to Chrysalis Night to any number of words and phrases dropped as a matter of course, but there’s just enough similarity to American society to give a creepy Uncanny Valley feeling throughout. J’onn is a corrupt cop in a way familiar to any afficianado of hard-boiled crime fiction, even if the particular details of his corruption are inscrutable. He returns home to his wife, M’yri’ah and young child, who happens to be a bean-shaped blob, and he and M’yri’ah discuss having another child following a bout of love-making that is, for lack of a better phrase, delightfully grotesque.

The art, throughout, does a spectacular job of being cartoony, yet bizarre. From Diane’s physics-defying haircut to the scene where J’onn and M’yri’ah form the beast with a singular, pulsating back (complete with cutaway panels to show the progress of their gelatinous merger), Rossmo’s art elevates this book into something unique and thrilling to read. Dynamic panelling throughout preserves interest and moves the story along quickly, while Plascencia’s coloring, rich in greens and oranges and pinks, gives the Martian landscape an appropriately alien hue.

While the Martian stuff is great, and the Earth plot has a good foundation, the two didn’t gel together, so far, as well as I’d like them to. I wish this issue were just a bit longer, or the storytelling a bit more economical, because I feel like while the first steps in both plotlines were fine I’d have liked maybe a bit more from both plots in this issue in order to get really hooked. As is, there are a pair of good premises laid down but neither advances quite far enough to really hook me.

Martian Manhunter #1 is a promising start. It presents a geuinely weird and alien Mars and an interesting mystery on Earth. With a little more development, this feels like a story that could make J’onn J’onnz a breakout character.