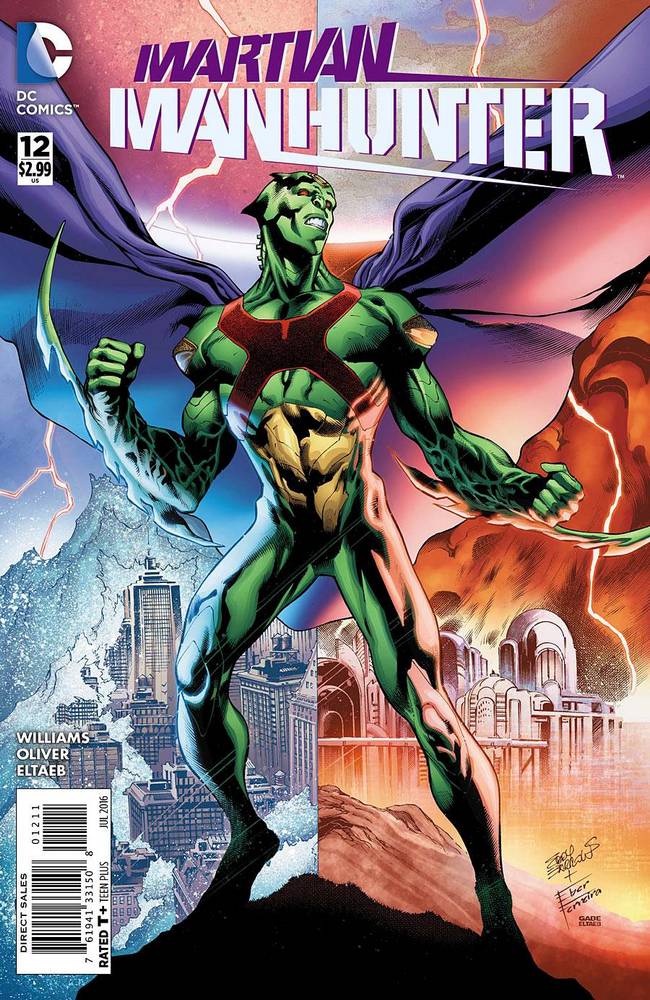 The science fiction epic tale of the Martian Manhunter comes to a close as Mars continues to threaten the existence of Earth.

Martian Manhunter has been a truly unique series in the DC lineup, operating at a level of science fiction that normally isn’t found at the Big Two. This is some broad scope, high level, Twilight Zone/War of the Worlds style sci-fi, and the ending caps what feels like a modern day superhero science fiction radio drama. I mean that as a compliment, as the series as a whole captured a unique tone and maintained it from the first issue to the last. Williams’ take on J’onn J’onzz is the kind of take that leaves a lasting impact on a character, though that highlights my primary complaint with this issue: it ends very cleanly. Williams had his back against a wall, having to end this high concept tale in arguably not enough time, and while it feels like a logical endpoint for this arc, it leaves J’onn in a place that is screaming for more exploration. The final pages of this issue make it feel like this story was setting up for a long arc for the character, but the net effect actually made the issue feel hollow. I don’t mean this as a knock against Williams, the deck was stacked against him, trying to tell such a huge story and not necessarily having the room to let it breathe. Martian Manhunter is a different character in my mind, and Williams has made his mark on the character. Overall, this series was written very well and even if the landing was truncated compared to the epic size of the story being built, Martian Manhunter was strong overall.

Ben Oliver’s art is solid, and he blends his style with the world Eddy Barrows has built well. The strong colour work by Gabe Eltaeb is a stabilizing factor, and he works with Oliver well. The artwork captures the epic scale of what is happening, and the turmoil within J’onn J’onzz. The kaiju, in particular, are right in Oliver’s wheelhouse, and the pages with the giants are where I find Eltaeb shines as well. I will buy any book that features Ben Oliver or Gabe Eltaeb working with Martian Manhunter in the future.

Martian Manhunter #12 is the grand finale for a mega arc that was ambitious and well executed as a whole. While I found this issue was better at setting up a future that we don’t know will be built upon rather than closing this series out, it did what it had to do in order to finish this tale off with the space provided. Williams, Oliver and Eltaeb are a good team, and I hope there is room in Rebirth for a book or two like this.