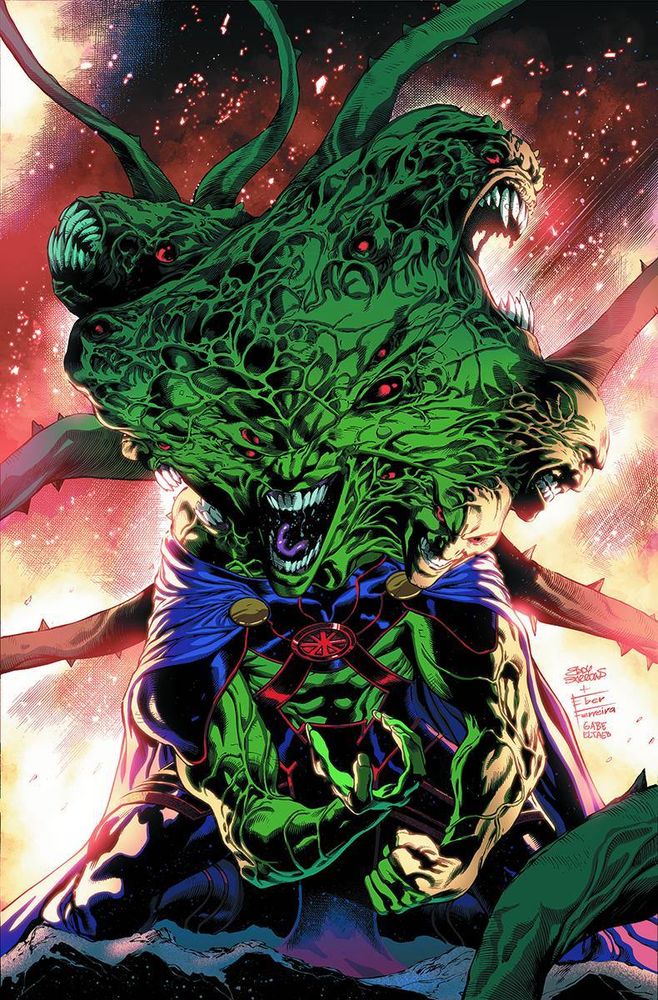 Okay, so this one is just gettin’ freaky, y’all.

Martian Manhunter has been a surprising book for me, as Williams and Barrows go deeper down the sci-fi well I find myself drawn in deeper and deeper. Often times, as books go more “out there” I’ll find myself diverging from where the creators are heading, but that isn’t the case with Martian Manhunter. This third issue and the invasion of the Martians is getting weird…and I dig it.

Williams does a great job with this issue of making the reader feel like we’re getting our minds twisted and turned like J’onn is capable of doing to people, and the final pages really bring it home. There were points where I thought they were losing me, but it all comes back together in the end in a fairly exciting way if you’ve enjoyed the series so far. Weird alien forces are in play and are coming to Earth with full force now, and Martian Manhunter is certainly not being portrayed as a typical meet-them-head-on-and-punch-them style hero here. That leads to some entertaining situations and even though I’m not an avid X-Files fan, I get an X-Files vibe off of this book. That simmering sci-fi bit of kind of creepiness, with all the explosions and cape fun of a superhero comic. It’s an interesting fusion that Williams is crafting, and this issue worked for me.

Eddy Barrows cuts loose with the Martians, and that’s a good thing. He drives home that eerie tension I mentioned earlier very nicely with his use of shadows and interesting angles, but his take on Martian Manhunter is still very “superhero”. There’s no disputing he’s a Justice League member, even if this story is unlike anything we’ve seen involving the League before. His pencils set a great tone for this issue, and his panel composition is really strong. His style choices of when J’onn is in the mind of another are interesting and, as you can see with the cover above, he can throw down when the story calls for it. Barrows is a great choice to bring the visuals of this story to life and his style meshes with Williams’ writing style nicely.