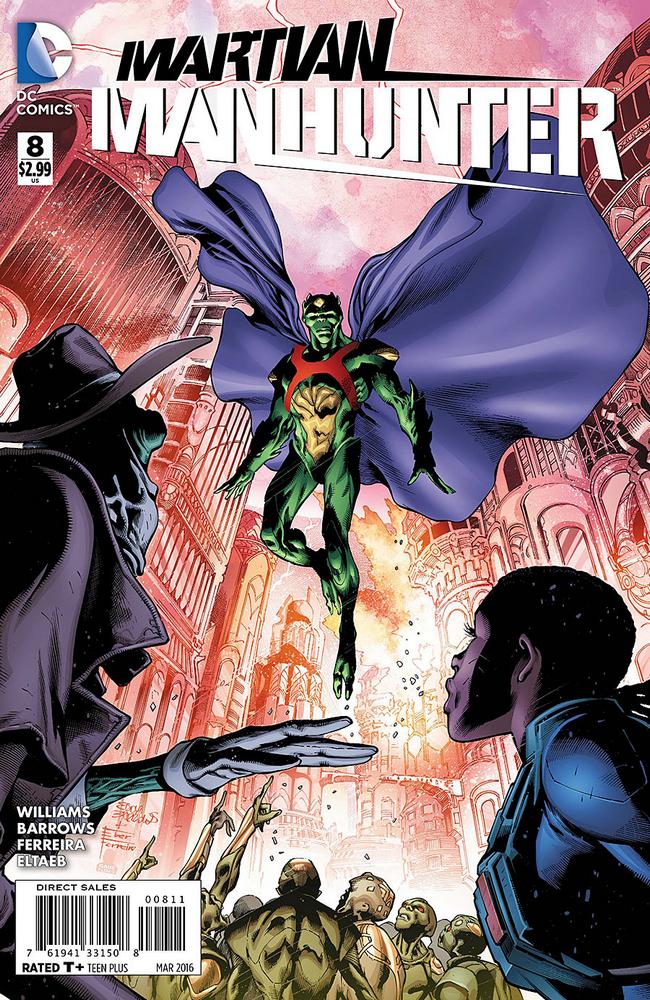 Martian Manhunter #8 is absolutely wild, featuring the impending crash of Earth and Mars, warlords, mechanized giants, Mr. Biscuits doing his Mr. Biscuits thing, and all sorts of chaos coming to a head. The build up to this point has been strong, with the creative team amping things up slowly in a way that is now absolutely wild, making Martian Manhunter #8 a ton of fun. Throughout this issue I found myself laughing at how wild this has all become, not that it is implausible considering what has come before this issue, but that the creative team is going for it full boar and making a really fun and crazy comic.

Rob Williams is throwing everything he can at this story, which can be a very bad thing when it goes sideways, but I am happy to report he’s keeping the ship afloat so far. The situation with Mars and Martian Manhunter is confusing but Williams is keeping the narrative together and issue #8 of the series brings some answers as to what has been happening and why to the forefront. We are nearing a long-built climax with this series and Williams does a good job keeping things vague enough to keep my interest piqued and even though the story looks to be moving toward being a slugfest, Williams builds a slugfest that is wild enough to work and be original. This is not your typical superhero book by any stretch of the imagination and I applaud Williams for throwing a ton of out-there and abstract ideas into this comic to keep it fresh and fun.

Eddy Barrows delivers the visual half of the madness and, considering all the things he has to show on the page, I was quite impressed. I like his take on the various pieces of Martian Manhunter and how each has such a unique personality. Biscuits is just phenomenal and when he’s on the page this comic soars. Barrows certainly gets to cut loose at many points in this comic and he more than does the story justice. Everything but the kitchen sink is flying into the fray in this issue and Barrows delivers when posed with the challenge of making this work visually. Considering the abstract parts of the issue, he renders them nicely and in a way that can be understood, which is no easy feat. Gabe Eltaeb takes Barrows’ strong pencils and brings some great colour work to this title. There are images that explode from the page with Eltaeb’s electric colour work and he and Barrows work together very well.

Martian Manhunter #8 is a wild and crazy comic that was a ton of fun to read. Williams, Barrows and Eltaeb aren’t holding back when it comes to making this story big and there is a blazing conclusion on the horizon, if issue #8 is any sort of indication. This comic is not your standard super hero fare, and I’m excited to see where the team takes this story next.