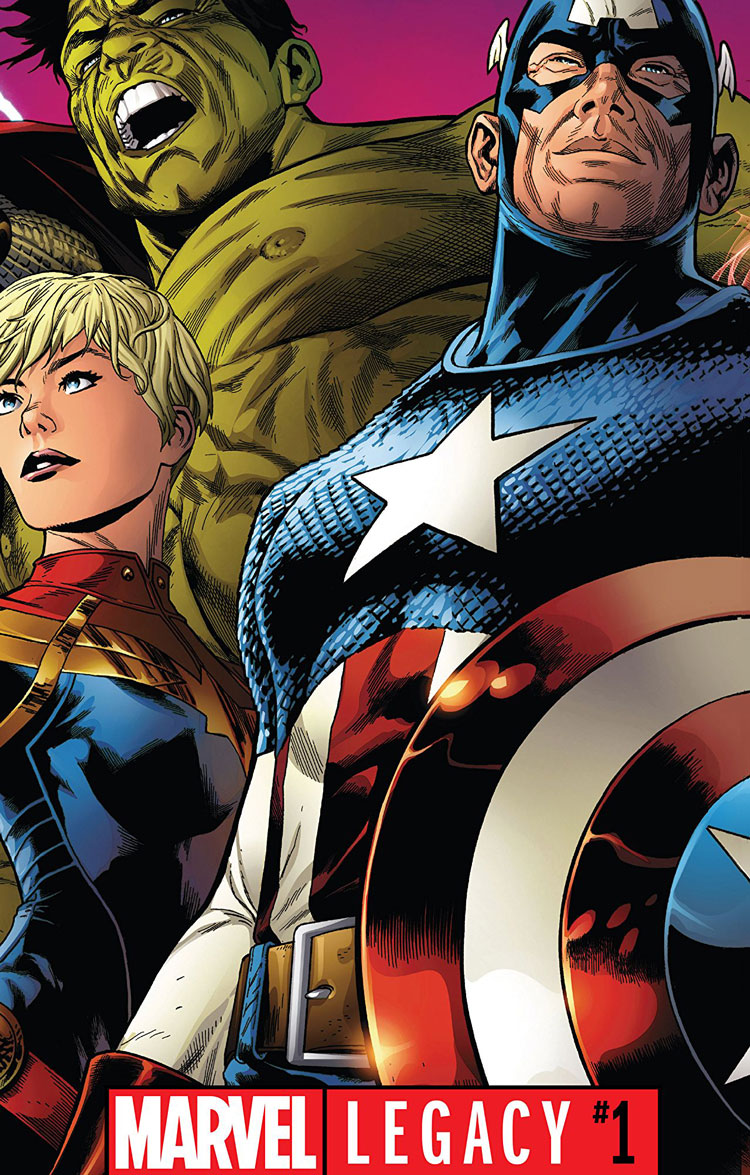 Marvel Legacy #1 is like one of those late-night greatest hits record packages from the 1980s (look it up) in that there is a whole bunch here for your money. Some of it is great, some of it is less than great. Everyone will find something to like in Marvel Legacy #1, but not everyone will be completely satisfied with what they get for the money shelled out.

One paper, as solicitation, Marvel Legacy #1 had my attention. Jason Aaron? Esad Ribic? The dynamic duo that redefined Thor and made me a Thor fan? Sold. Six bucks?! Uh, well, ok. Still sold.

And there lies the major problem with Marvel Legacy #1. Marvel wants this to be the gateway to everything coming up. The title of this comic could be “Marvel Legacy Sampler” #1, and it’d be apropos. To that end, this really should have been crowned with an irresistible price tag.

As it is, Marvel Legacy #1 has a pretty narrow scope, as Jason Aaron introduces readers to the “original” Avengers – or pre-history’s version of such – bringing together predecessors for Starbrand, Thor, Iron Fist, Phoenix, Black Panther, Ghost Rider, and Doctor Strange. It’s a little bit Jonathan Hickman and Dustin Weaver’s S.H.I.E.L.D., and a little bit What If…? The Marvel icons represented are fun to see, but the heretofore-unseen alliance is a bit of a headscratcher.

The modern-day portion of the comic has a surprisingly tight focus, checking in with most of the heroes that carry on the mantles of those mentioned above, even if they don’t know it. Starbrand and Robbie Reyes Ghost Rider arguably take the largest portion of the spotlight. The issue is rounded out with a subplot surrounding the current crop of legacy heroes for the new Marvel Universe – Sam Wilson Captain America, Ironheart Riri Williams, and Jane Foster Thor.

Aaron blends both tales together nicely, even including check-ins with Steve Rogers, the X-Men, Odinson, Tony Stark, Deadpool, and Norman Osborn. There are a couple returns to the Marvel Universe along the way that will make readers smile, but those moments are fleeting and left for continuation elsewhere.

The sampler portion is fun, but thin. It has to be to tease so much of what’s coming up, but there are glaring holes in what is shared. These are quick one-page vignettes of titles to come, with art by creators who will handle the new adventures, like Chris Samnee drawing Steve Rogers on the road, Daniel Acuña on Black Panther, and Jim Cheung checking in with Ben Grimm and Johnny Storm, among other bits.

Of the bits, the Human Torch hits the nail on the head most directly in describing the current state of the Marvel Universe when he shares, ”They could make a whole team right now just outta Thors and Hulks.” That bit might not exactly herald a return of the Fantastic Four directly, but in that scene, fans of the Four are given a clear reason to check out the upcoming Two-In-One. And the art from Cheung (with colors from Matthew Wilson, presumably) doesn’t hurt at all.

When Aaron and Ribic collaborate, it’s comics worth reading. Even shoehorning in a team that never happened until now (although, this is comics and everything is possible) winds up being entertaining and gives me enough to look forward to more of the team anchored by Odin. I’m not completely clear where to look for that, but if the eventual title carries a six-dollar pricetag, I’ll have to give it some serious thinking.

As he did throughout Secret Wars, Ribic’s style is rendered and complete, but organically rough. The black shadows aren’t pure black, they have depth, pattern, and texture. That gives the characters breath, and infuses the setting with grit. This is a lived in world, with characters that have to keep inhaling.

Ribic’s storytelling (through panels and within panels) is exceptional. He uses body language not only to convey action, but attitude and reaction. And it’s all gorgeous. Wilson’s colors preserve Ribic’s lines nicely while punching up their brilliance, and the colorist is spot-on throughout Marvel Legacy #1.

It doesn’t matter who the line artist is, Wilson handles it all deftly, gently tweaking to match, but never straying from the core color palette he has assembled for this comic. As a standalone introduction to a wider universe, this is a fun comic filled with well-executed visuals.

Inevitable comparisons will be made to DC’s Rebirth, but they’re off-target. The returns in Marvel Legacy #1 might be on the same level of fan appreciation as Wally West’s return in Rebirth, but the overall impact to the Marvel Universe isn’t as significant an infusion of hope, as it is simply a realignment of what made Marvel, well, Marvel.

All in all, Marvel Legacy #1 is a decent read. It’s not a must-have by any means, but there’s some good fun present for those who decided to take a sizeable chunk out of their comics budget this week for one title.

Like “Freedom Rock” or “20 Original Hits! 20 Original Stars!” there’s something in Marvel Legacy #1 for everyone, but not everything for everyone. If you can spare a coffee or a fast food lunch this week, Ribic gives you some fine art in return and Aaron an enjoyable story.