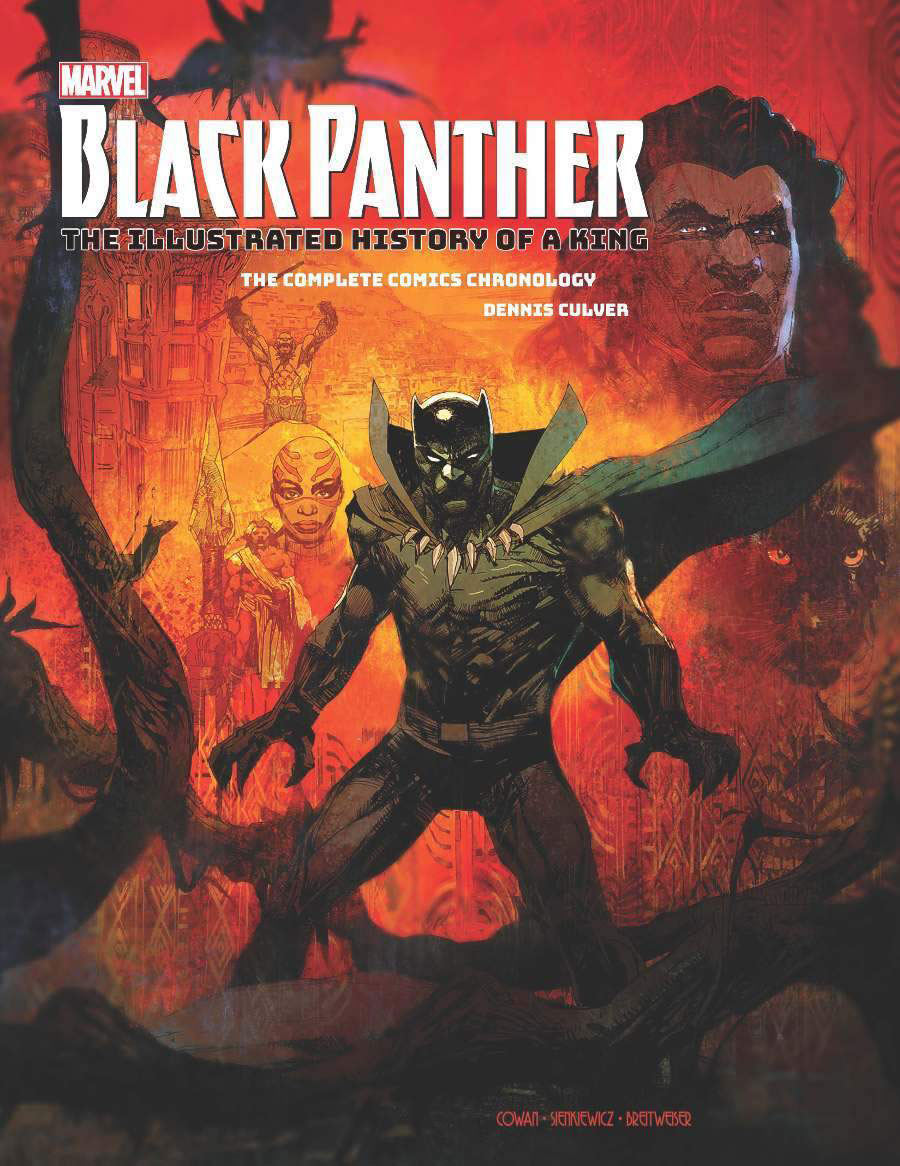 The last time I wrote about a book from Insight Editions, it was about the Guardians of the Galaxy, and I mentioned that Arnold Drake’s creations (the original Guardians among them) are some of my favorite things in comics. Some of my other favorite things spring from the mind of Jack Kirby, independently, or in conjunction with Stan Lee.

The Black Panther is one of the latter.

In a manner that is timely for the barrage of Black Panther merchandise and coverage, Insight published Marvel’s Black Panther: The Illustrated History of a King – the Complete Comics Chronology. That title may seem daunting, but it’s pretty darn accurate, given the contents of this book.

Written by Dennis Culver and clocking in at nearly two-hundred pages, Marvel’s Black Panther: The Illustrated History of a King – the Complete Comics Chronology is not a light read, nor is it a book designed for travel. It physically measures fourteen-and-a-half inches tall and eleven-and-a-quarter inches wide. The cover is graced with a Denys Cowan-Bill Sienkiewicz-Elizabeth Breitweiser collaboration that could easily be a stylistic poster for the feature film hitting theaters now.

The book, like the Guardians book, is a devotional to the character and the medium, it’s a historical text for comic book fans in general and Black Panther fans in particular. It leans more towards being an art book, however, playing to the strengths of its physical size.

Culver then assumes the dual role of museum curator and historian. The former is easy to do, when you can rifle through a body of work that includes art from Jack Kirby, Francesco Francavilla, Sal Velluto, Rich Buckler, Denys Cowan, and John Romita, Jr., among others. Their work is, at times, presented at originally published size (or slightly smaller) and, in other cases, published to run across the spread of the book opened up – almost two feet in total.

On the historical side of things, Culver is observing and investigating. No one necessarily had the foresight to preserve extensive discussions about the Black Panther with Kirby, and Stan Lee’s contributions to this book are solid, but the vast majority of quotes used in Marvel’s Black Panther: The Illustrated History of a King – the Complete Comics Chronology come from more modern comics creators, especially those that have walked in the footsteps of Kirby and Lee.

Culver surveys a few creators that have passing experience with Black Panther, but he also found creators most closely associated with Black Panther. That said, Culver does include a great deal from Don McGregor, whose contributions to the Black Panther mythos served as the impetus for the world of Wakanda in the feature film.

“Panther’s Rage” showed readers what Wakanda is all about, and gave the Panther his most fearsome nemesis (no, not Ulysses Klaw/Klaue) – Erik Killmonger. Christopher Priest recently noted that McGregor’s contributions to the Black Panther brand are undeniable, and, thankfully, Culver captures the scope and impact of those contributions.

Additionally, Culver does a nice job of aligning T’Challa’s comic book adventures with the parallels in real world civil rights issues, citing Black Panther creators throughout, and providing historical context for the developments in the comic industry and on the comic book page.

Like the Guardians book, most of the art in Marvel’s Black Panther: The Illustrated History of a King – the Complete Comics Chronology is finished. Culver re-presents covers and panels from throughout Black Panther’s publishing history, and he does so wonderfully. Personally, I would love to see more character studies and sketches presented at this size, especially for a character with as much history and as many fantastic artists as Panther has.

Marvel’s Black Panther: The Illustrated History of a King – the Complete Comics Chronology is a fantastic book, especially for fans craving more Black Panther history and art. This isn’t a DK Encyclopedia about the character and his surroundings, nor is it the most in-depth process investigation regarding a character’s creation and publishing history. It is, wonderfully, an art book. This is something that invites immersion and scrutiny.

Marvel’s Black Panther: The Illustrated History of a King – the Complete Comics Chronology is appointment-worthy ready and absorbing that Black Panther, Marvel Comics, and comic book fans will want to seek out. Just be sure to clear plenty of table space.