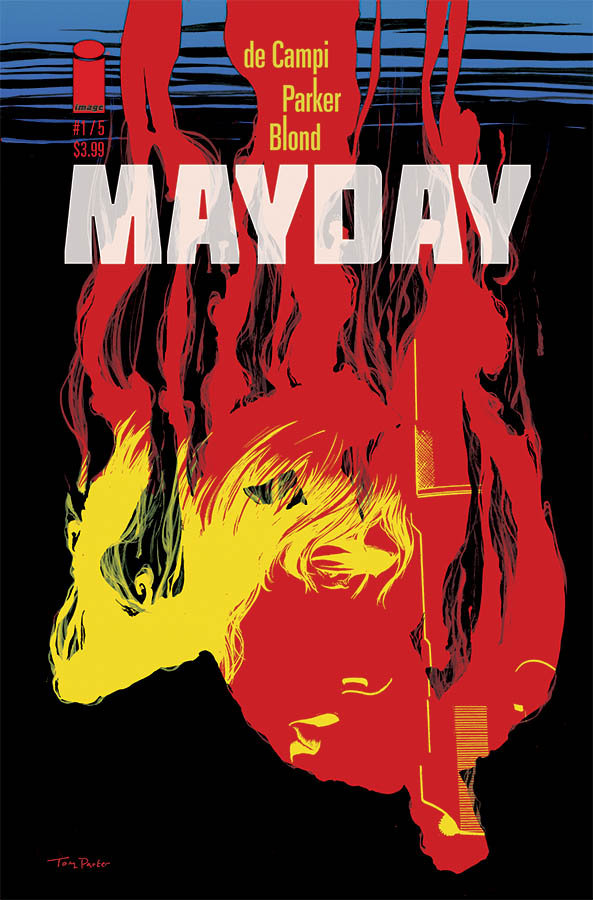 No Mercy and Semiautomagic writer Alex de Campi treks back to 1971 with artist Tony Parker and colorist Blond to examine the curdling of the Age of Aquarius into the ennui of the Nixon presidency — all through the eyes of a pair of young Soviet operatives. It’s plowing straight through the last vestiges of hippie excess on a mission to muzzle a dangerous defector in Mayday’s debut issue.

There’s a lot of ways to approach a period thriller like this, whether it’s Mad Men, as de Campi herself suggests — outlining the scope of her ambitions for a broader story entwining the development of rock with the apotheosis of Soviet espionage in the backmatter — or The Americans. But those are too superficial to say anything of note about the comic.

To my eyes, Mayday positions itself — and revels within — the tipping point of the American cultural moment described by Hunter S. Thompson in Fear and Loathing in Las  Vegas’ “Wave Speech.” It’s the point at which the tide of the collective counter culture’s sense of simply prevailing over the forces of old and evil out of sheer inertia broke and rolled back.

What distinguishes de Campi’s vision from similar excavations of the period (most notably NBC’s Aquarius, tracking the rise of Charles Manson towards the Tate-LaBianca murders), is that she, Parker, and Blond skip right over any notion of deconstruction that would begin with a cheery nostalgic gloss to be peeled back. Instead they position us just as the tide is pulling back and the bodies are washing up on shore.

Our introduction to de Campi, Parker, and Blond’s Bay Area is the FBI’s clumsy infiltration of the Black Panthers and the rampaging Zodiac Killer. When free love does finally emerge in Mayday, it arrives seedy and broken down wearing the skin of Manson himself, cheap thrills and petty crime dressed up as revolutionary acts on the road to some indefinable utopia.

In the backmatter to the issue, de Campi deadpans that Kieron Gillen puts music in his comics out of love for the readers and she does it “because fuck you.” It’s an ethos that comes into clear focus if you follow along with the Spotify playlist she’s set up with cues for the specific tracks written into the comic.

The quiet dissonance and unease that Parker and Blond work into the pages introducing us to the defector claiming to have a microfilm revealing Soviet agents embedded in US forces in Vietnam leap to the forefront with the choice of John Cage’s experimental noise, building into menace and loud confrontation through Alice Cooper, The Doors, and finally the primal roar of Led Zeppelin’s Black Dog.

That dedication to period and tone translates easily into the artwork most palpably in our plucky young spies accidentally dosing themselves on a spymaster’s cocktail of sodium pentathol and LSD laced into a bottle of vodka intended for the defecting general.

That, in and of itself, is an insidious way to make it clear that the forces of old and evil have their fingers in every pie: instead of being introduced as the pseudo spiritual hallucinogen of Ken Kesey and Timothy Leary, it comes to us as the product of MK Ultra and the CIA’s unrelenting quest to develop the perfect truth serum.

Appropriately as it hits and Blond works its influence into the page with neon highlights that quickly overwhelm the page, the hues are pushed well beyond the pleasant and spacey hallucinations usually used to evoke the period and the drug itself into a harsh and dissonant mix that clash sharply with Parker’s thick, black inks.

Love in the time of Cholera, LSD in the time of DMT is the message Parker and Blond build up through the trip as Felix and the woman trying to seduce him devolve into an angry, symmetrical struggle shot through with hot pinks and oranges that, serene on their own, fuel the dissonance and aggression of the bad trip.

The brilliance of it is that Parker and Blond draw from the typical palette and composition of a more pleasant or transcendent acid trip and simply twist those elements until they accomplish the opposite. Dissonance instead of harmony, the figures splitting apart instead of melding, Felix’s inner mind translated in the harsh geometry and uniformity of Soviet brutalism, literally bleeding as it cuts into the soft, swirling curves of the hippie woman’s psychedelia and fecundity.

What makes Mayday stand out from the pack from 20th century period pieces not only in comics, but in contemporary fiction in general is that the creative team is able to construct a dark and foreboding reconstruction of the recent past through the intricacies of the medium itself: composition, color choices, and even the curated soundtrack instead of resorting to the cheap tricks of gratuitous and exploitative violence.

The words and deeds matter, and will definitely bubble up to be a driving force in the story through the intrigue of quietly warring nation states, but for now they take a back seat to visual and sonic immersion, something creators all across the medium could stand to take a lesson from.