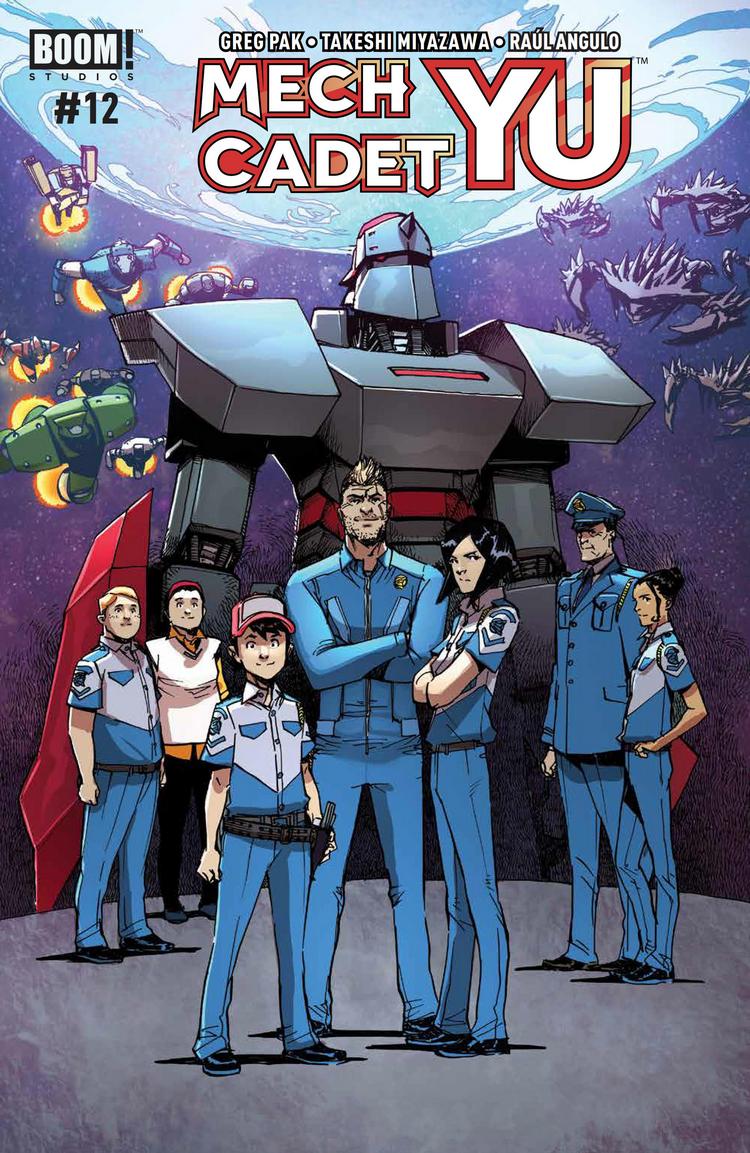 As Sharg ships land on earth, will Park and Stanford be able to find a way to save their robos and still charge the Suprarobo? Find out in this issue of Mech Cadet Yu!

Pak does something in this issue that I did not see coming. I won’t say what it is, but it is something that made me physically gasp when I saw the event. It’s not necessarily something you would not have thought could happen, the way things have been heading in the series, but it’s still a very gutsy move to pull.

I like that you see genuine emotion from Park’s father in this issue. It’s hard, sometimes, understanding that that man actually does care about his daughter, and even though this doesn’t change the fact that his relationship with his daughter isn’t the healthiest, it is nice to know that he cares for her.

What I love the most in this issue are the splashes and larger panels. These wide expanses of destruction that seem to encapsulate all you can see, millions of pieces of ships crackling and bursting into the air as shots are fired. They’re captivating in that sublime way, the kind awe-inspiring once was, this intimidating, otherworldly, all-encompassing feeling of dread and known power that just makes your heart clench as your look at the panels. This is what, realistically, a war between kids with robots and giant aliens would look like and it’s the saddest thing in the world.

As always, the lettering is great. I do truly appreciate that Bowland takes the time to color the letters depending on the characters, it’s a nice touch that helps when they’re all in their mech suits.

I still have so many questions that haven’t been answered. Where do the giant robots come from? How terrible was this last Sharg attack on humans? Where do the Shargs come from? How do they create their ships if they don’t seem to have a body structure that would allow them to create the ships they have? Why are they attacking Earth? Why are the robos helping Earth? Just. So many questions, and to some extent, the series frustrates me. That’s not to say that I didn’t love Mech Cadet Yu. Watching Stanford and Park’s friendship blossom into something close has been amazing and the world it’s set in is fascinating. I don’t know if this series will ever have a sequel, but I sure hope it does so I can at least see more of the world.

Mech Cadet Yu is well worth your time. It’s a great mech comic that has some fun twists and turns and goes way darker than I thought it would actually go.