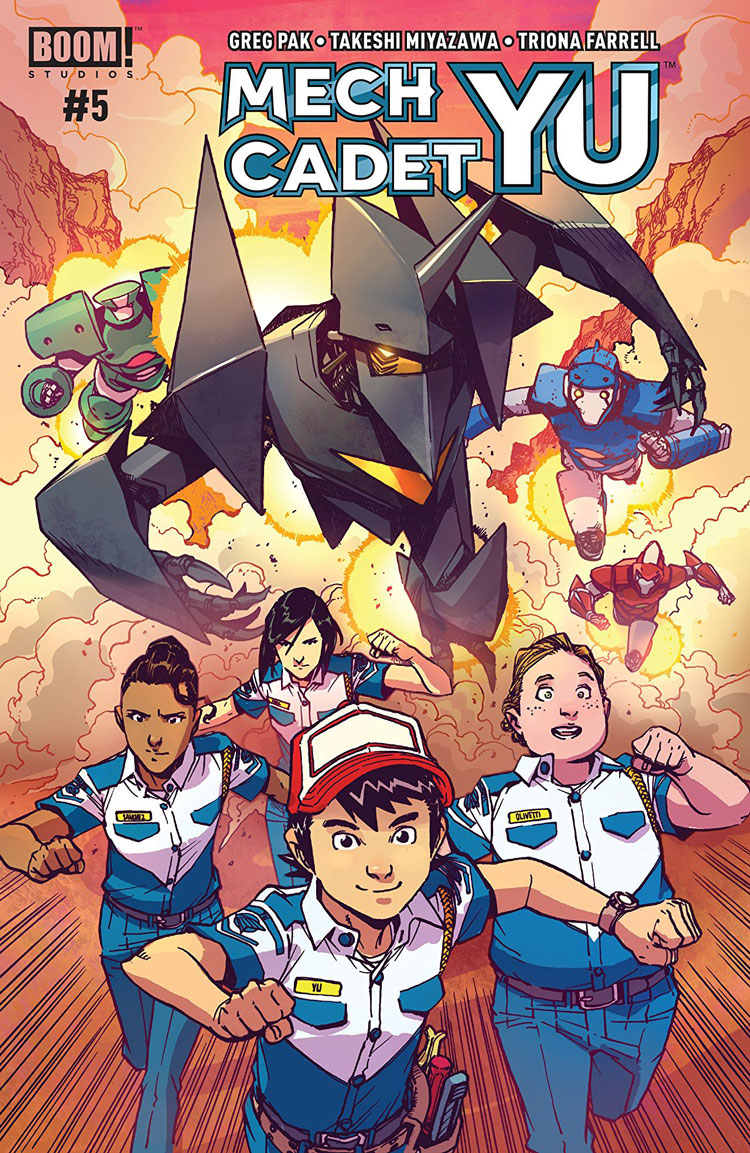 After their valiant efforts in defeating a sharg, Stanford and the gang are tasked with their punishment! But will they truly learn a lesson about disobeying orders? Find out in this latest issue of Mech Cadet Yu!

I love the writing for this comic. Pak has built up a wondrous, superficially good and bad world in the eyes of Stanford, where heroes are all good and the villains are inhuman behemoths created solely to destroy the human race. The cracks have started to appear in this simple worldview and I can’t wait for it to all shatter and show the truth behind the shargs, behind Skip Tanaka, behind the wars they fight with these strange robots from outer space.

I also loved seeing the behind the scenes dirty work of the fights between robos and shargs. I like how there’s this great emphasis on not only the fighters in this war, but the Engineer Corps and the Janitor Corps. I like that every cog in the war machine is just as important as those who fight the war. Not everyone shows the aftermath of a battle, let alone gives a spotlight to those who clean up and make sure everything is rebuilt, and I really appreciate that choice.

The robo designs are always so intriguing. I love how unique they all feel, how a lot of them aren’t the machismo battle bots you’d think to find in a mecha genre comic, but these almost childlike creatures that seem so innocent and needing of instruction. It’s refreshing.

I’d also say that the sharg in this issue really drew my attention. I feel that, sometimes, its even more terrifying to have a monster that doesn’t seem to know what it’s doing rather than one that is ten steps ahead. Something about that instinctual juggernaut quality of a monster barreling towards you with a look of sheer animalism is horrific and that look, that facial composition of the sharg is what really stands out.

Triona Farrell’s coloring, as always, is spectacular in this. The contrast between the robo corps blues and the janitor corps yellows feels very distinct. I’d definitely say that the night sky would not be as captivating in this issue if not for the coloring Farrell brings to the table.

Definitely check out Mech Cadet Yu if you haven’t already. It’s a fantastic sci-fi adventure story and I’m excited to see what twists are in store.