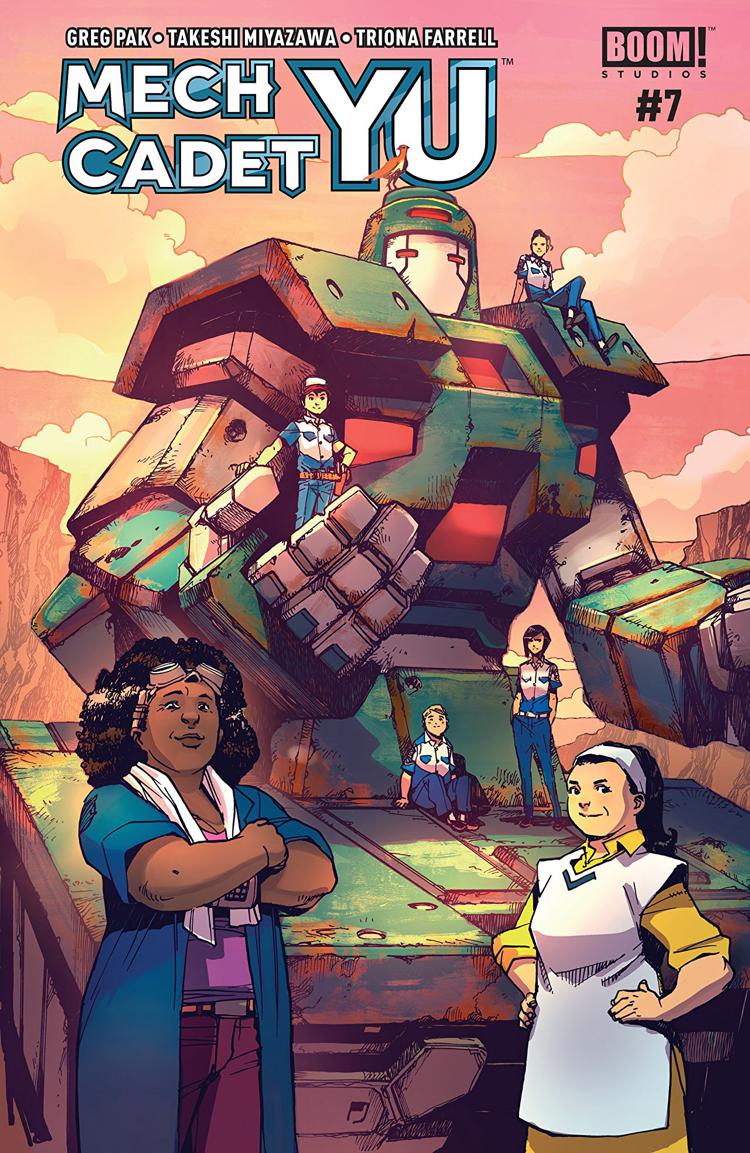 The Mech Cadets are no more! Sky Corps Academy has been closed and the mech cadets have been shipped to Central Command in this latest exciting addition of Mech Cadet Yu!

Pak provides a haunting reality in this latest installment. One where the military has enough control over the media to where the media tones down an epically scaled attack by the shargs, where all is not what it seems in Central Command, and one where one might question whether or not Tanaka someone Stanford can trust or if he’s just using him and the other cadets for his own plans.

While I love the growing intrigue and doubt on who Stanford can trust, I think the growing relationship between Park and Stanford is my favorite piece of writing in this issue. I love their rapport with each other, their belief in one another, and the lengths they go to help each other. I look forward to seeing more development between the two.

The art, again, is fantastic. Miyazawa paints a terrible display of catastrophe and war well as Stanford and friends fly over a devastated urban battleground. I’d say my favorite scene in this issue comes from the batteries being created to power the mega robo. It’s a haunting, cynical creation, mech hearts floating in glowing blue liquid containers, each filled with several, scientists and mechanics working as if what they’re doing isn’t horrifying in retrospect and almost inefficient when you think of the plan that seems to be forming on the human military side.

I love the coloring Farrell provides in the more dramatic scenes. The red tones as Schatz screams “Bronto!”. The green glow backlighting Stanford as he questions Tanaka and his true intentions. These scenes would not be as gripping if not for the work of Farrell.

I don’t know why you’re reading the review to Mech Cadet Yu #7 if you haven’t already started reading the comic, but if you haven’t, read Mech Cadet Yu. It’s a grand mecha with all the tropes you’d want in a robot fighting monster drama with a bit more polish than you’d usually get. It’s fun, it has some great tension, and it’s definitely worth your time.