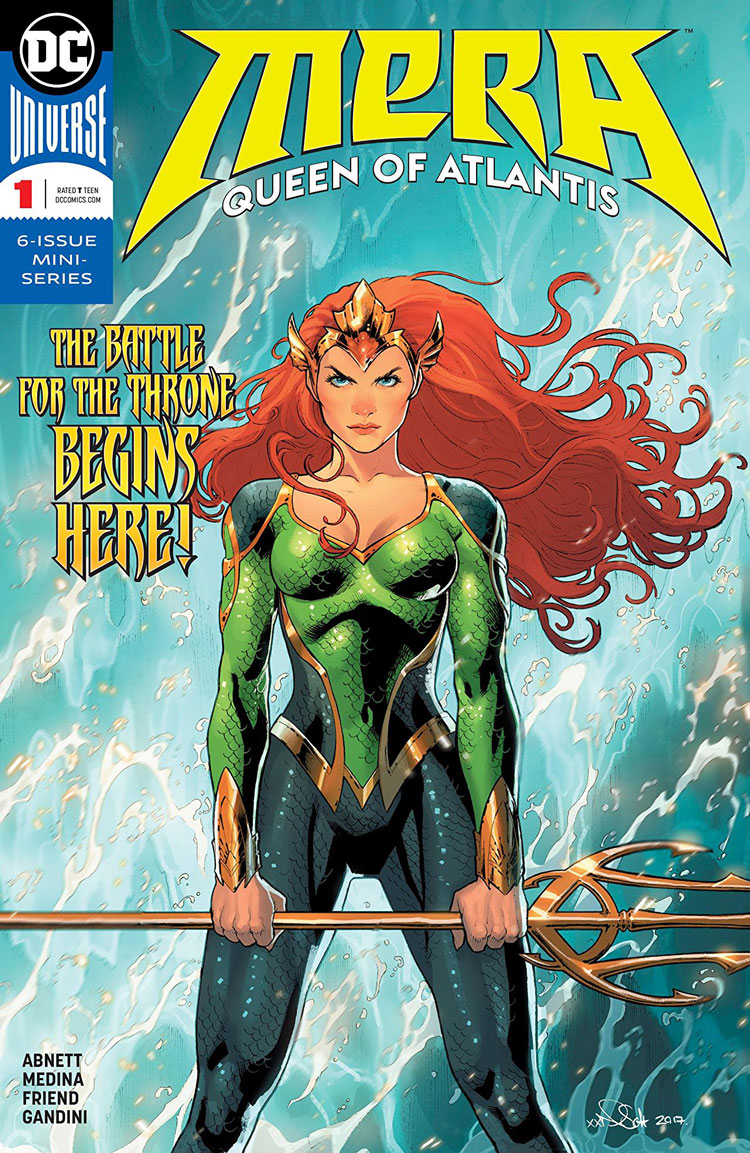 Mera has just found herself Queen in Exile. With Rath taking the Atlantean throne by force, he has ousted Arthur and Mera, and begun a civil war. While the Justice League hasn’t heard from Aquaman in a while, he’s leading the revolt to take back his throne.

Mera has been wounded in battle by magic, and is trying to recover on land. This magic was so powerful that it made her weak, helpless and unable to breathe underwater. Now with the help of Tula she must begin healing on land, before she can even think about healing her torn homeland.

I absolutely love how bright the comic is. The water is a crystal blue, the villains are bright and lively, even Mera carries herself as a dignified queen in vivid color by Vero Gandini. I’m quite partial to clean lines in my comics, which only made me love the work by Lan Medina and Richard Friend even more.

I’m the biggest fan of the writing by regular Aquaman scribe Dan Abnett. Even though Mera is in a tough spot, she isn’t letting it get her down. She’s tired of doing what life chose for her, and she is ready to start fighting for her spot, and exactly how she wants her future to go.

I’ve never really gotten to experience Mera as a titular character, so this was my first real glimpse into how she is. One of the biggest reasons I was excited to review this issue was because it was all about her, I wanted to really get to know her as a character. She isn’t having the greatest time, but I think this issue is a great example of how she handles strife and conflict. She’s strong, and even though she feels like she’s drowning, she’s pretty much still in control. She has a plan of attack, and she knows exactly how she is going to achieve it!

I would definitely recommend this issue to anyone wanting to learn more about Mera, or someone who is interested in the universe of Aquaman, or just wants to read another comic with a female lead.