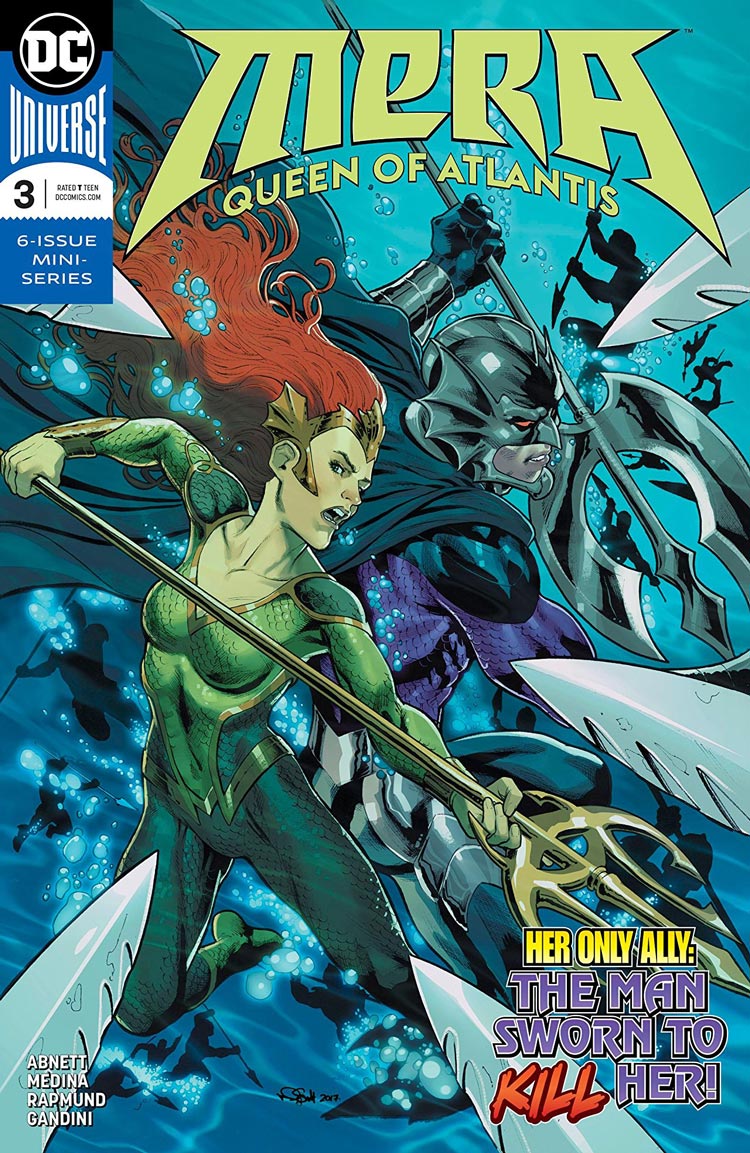 Mera confronts Orm before returning to the sea!

Mera: Queen of Atlantis #3 is a fascinating and unexpected comic that delivers a delightful swerve away from expectations. The prior issue sets up a big battle between the two, as Mera was proclaimed queen-in-exile by Atlantean rebels and Orm set out to stake his own claim to the Atlantean throne. Issue #2 ended with both would-be sovereigns holding each other at triton-point, just as Tula and Orm’s adopted family arrived to witness the battle. Everything is set up for a big fight to occur in the third issue.

And then that fight never happens. Instead, we’re treated to something far too rare in the superhero genre: A hero (who’s sometimes not very heroic) and a villain (whose motives are complicated and isn’t necessarily wrong) talking over their differences, finding common ground, bonding over their shared sense of duty, and deciding to work together to deal with a problem.

That’s not to say there won’t eventually be a big fight between the two; only one head can wear the crown of Atlantis, after all. But in the meantime it’s refreshing to see a conflict resolved in a superhero comic with words rather than fists.

Mera: Queen of Atlantis has done an excellent job humanizing Orm. Perhaps, all told, too good a job; the creators have, so far, made Orm a more compelling character in this drama than Mera. Partly that’s attributable to the storytelling craft involved. Orm’s character is enriched by showing us the loving family he’s adopted and the conflict that tears him from them and calls him back to Atlantis.

Mera, on the other hand, is characterized through flashbacks showing her battling as a princess of Xebel. Orm’s characterization is more immediate and has more impact than Mera’s, which has the effect of making Orm more interesting. That’s not necessarily a bad thing on its own, great stories have been told with compelling villains and anti-heroes matched against more thinly characterized heroes.

Nonetheless, it’s a bit of a shame, given that this is Mera’s first solo series, that she seems to be of secondary interest within the story.

This comic is a delight to look at, as any comic featuring the Aquaman family should be. The musculature and anatomy are flawless throughout, while faces are expressive as characters have emotional conversations for much of the issue’s length.

Particularly amusing is, when Mera is not part of the conversation, she sits in the background practicing her aquamancy skills, forming water into hearts and elaborate knots. It’s simultaneously entertaining and gives insight into her character.

Particular attention has to be paid to the color work by Veronica Gandini. The use of softer colors, particularly for flashbacks, lends the comic an almost storybook quality and gives the storytelling vibrancy and life.

Mera: Queen of Atlantis #3 puts an interesting twist on its story. It’s well drawn and compels the reader to want to find out where the story will go next as the series unfolds.