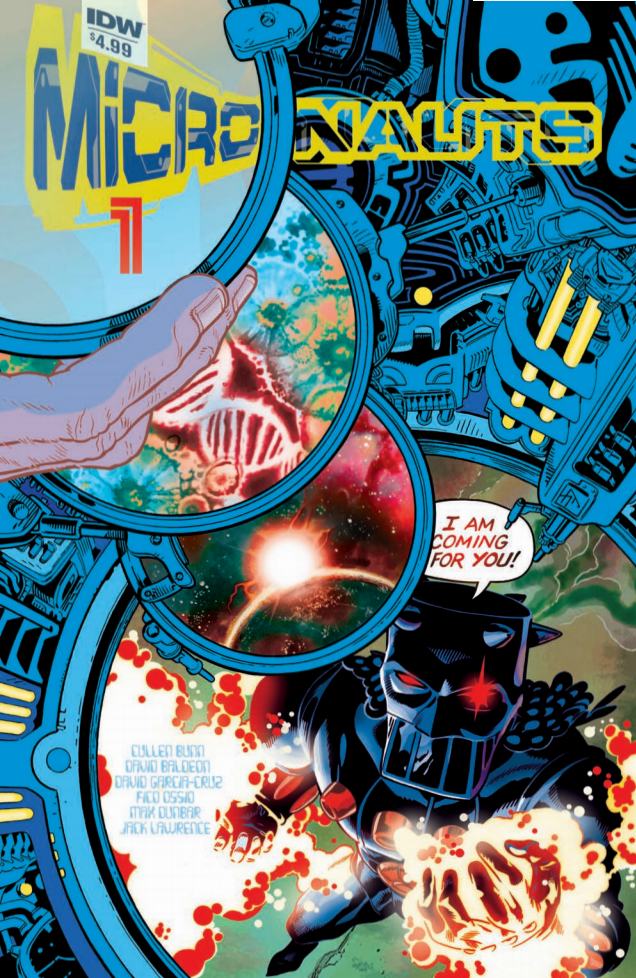 When IDW announced a pair of newly licensed comic book properties, I made a mental note to check them out. While I was not a huge devotee of either property, the fact that IDW managed to bring both Rom: Space Knight and Micronauts into their fold were definitely intriguing.

I’ll admit Rom held a little more interest for me than Micronauts, but only until I saw the creators associated with the titles. That’s not to say I’m immediately discarding Rom, but David Baldeon handling the art chores of Micronauts definitely made it worth my time and attention.

I’ve been a fan of Baldeon’s from his days drawing one of the myriad X-Men titles, whichever one it was that included Frenzy as a cast member. Baldeon has a style that’s equal parts animation character study and classic comic book. His characters telegraph emotion on their faces and carry intent through their posture. Additionally, Baldeon has a wide range body types and a strong sense of storytelling. His knack for details is well-suited for world-building, and with Micronauts under a new publisher, being introduced to new readers (and potentially other new outlets) it is simply a brilliant match.

In Micronauts #1, Baldeon is credited with breakdowns, but also with some of the finishes. His finishes are sharp and crisp, cleanly Baldeon through and through. Luckily for readers one Baldeon’s finished scenes is the introduction of series bad guy, Baron Karza. Hazy mist drifts upward, glaring lights shine over his shoulder, and the background is detailed, but not distracting, giving Karza an imposing first panel.

The rest of the issue is a mixed bag, mostly solid, with some spots much more appealing than others. The various finishing styles are augmented by a collection of colorists dividing the chores of Micronauts #1. Baldeon’s finished bits are the strongest (and most recognizable) throughout the issue. The variety of finished styles and accompanying colors range from saturated and garish to smooth and polished. Most of the changes appear to accompany scene changes, which minimizes the distraction, but little, descriptive visual cues shift slightly from one creator to the next.

Writer Cullen Bunn saves readers the chore of slogging through introductions by simply taking the reader through the Micronauts galaxy in the midst of life. There’s a civil war brewing, an entropic wave destroying, and typical commerce, negotiations, and squabbles. Beyond Karza, Bunn introduces a half-dozen characters, and sets up framework for personalities and interactions without breaking pace. By the end of the issue, readers have a sense of the inhabitants of this new Micronauts title, and may even have enough information to start fancying a favorite.

To help readers absorb this new world, IDW drops in ten pages of sketches from Baldeon’s sketchbook and a rundown of characters snagged from Bunn’s notebook. Normally reserved for collected editions, this material is a fun addition to the story and a nice salve to ease the burning need to read more Micronauts following the explosive end of Micronauts #1.

I came into this title with passing knowledge of Micronauts (most of which, admittedly, is familiarity with Bug, who remains a Marvel character, to the best of my knowledge). Now, I’m looking forward to the new adventures of the Micronauts as Bunn and Baldeon continue to populate the galaxy.