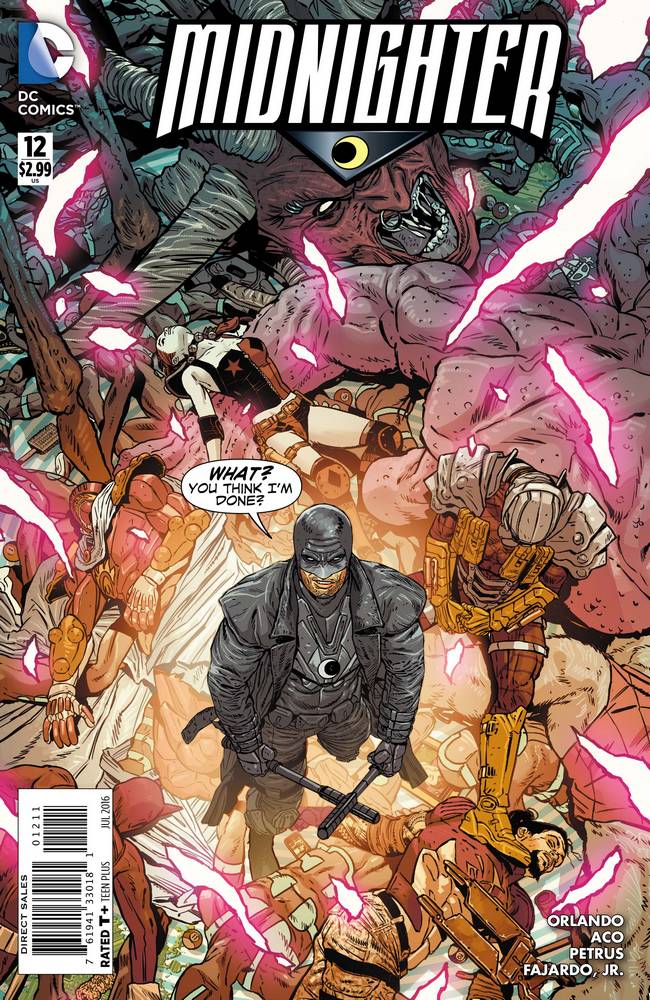 The final battle against Henry Bendix’s perfect Superman is happening, so who better to tag team with Midnighter than Bendix’s original superman himself — Apollo! Will M and Apollo reunite for more than just punches, though?

This is the last issue of Midnighter. And I am rightly devastated.

Look, I get economics. I understand that not everything in comics is fully appreciated in the time in which it is published. But I am bitter. I am bitter about the comic shop owners who never bothered to hand sell what is inarguably one of the finest action books on the stands today. And I’m beyond bitter about any online commenter that wrote the character off as one-note and never bothered to check back, despite critical acclaim up the wazoo.

But I am also grateful.

Orlando, ACO, Petrus, and Fajardo have concluded this series with as much vigor and sensitivity as they carried throughout the previous 11 issues. Midnighter is the bad ass. He’s the charmer. He’s the threat. And he’s the solution. He’s all these things, and none of them exclusively. He’s Apollo’s boyfriend. He’s a gay man who’s explored his sexuality and commitment to his own happiness to its fullest. And he’s kicked as many asses as he’s fucked. [Yes, Emma. He has.]

Issue #12 takes everything about Midnighter that I’ve come to love and hold dear, and amplified it with Apollo’s involvement. Orlando is careful to tread carefully on re-establishing their relationship, which may seem curious to some romantics looking for the perfect happily ever after, but seems pretty darn perfect to me.

Relationships — especially first and extended loves — are patterns that are as attractive as they are scary. M isn’t the same guy he was at the start of issue #1. Not really. He was green at interacting with anyone he wasn’t literally built to love. He was overbearing. His sex was not rough, but aggressively eager. And his head wasn’t in the best of shape. Computer brains aren’t relationship meters. Predicting a punch isn’t anticipating a kiss. And Orlando and ACO characterized that perfectly at the start of the series, with a man who was visually and through dialogue — lost in himself.

Except when in a fight.

And what we’re seeing in issue #12 is a dance between Midnighter and Apollo that feels more natural, more self-assured, and not just on the battlefield. It’s almost as if Orlando has pulled together these two threads  — the personal life and the “work” life — and recombined them like DNA twisting to create something stronger. Something in M that’s stronger than when he left Apollo. Not because he was wrong to leave and suddenly realizes it. But because he took the necessary journey in order to get to the right place to stay.

If that sounds overly romantic or overreaching, well, maybe it is. But this is the first time in mainstream super-hero comics (and may indeed be the last for a while to come) that we got this kind of deliberate, careful, and deeply passionate portrayal of a gay man’s coming of adulthood and investment in his own sexuality — failures and disappointments, as well as joys, one night stands, and comforts. I’m not taking that for granted, and I am deeply grateful for it.

ACO and Petrus split duties here, much as we split attention between M’s love life and business, but truly for this issue, all things are combined. I appreciate DC’s attention to detail in this particular book to identifying the pages from each artist. I appreciate it more now having dissected the book to realize I may not have been able to tell had I not be told explicitly who drew what. The gentlemen delivering these pages are in perfect sync with each other, their panel construction and quality of line wonderfully matched. It makes for a beautifully cohesive issue, and underlines its best aspects.

This issue is not one thing or another. It’s not ACO or Petrus. It’s not love or war. It’s not being single or being with Apollo. It’s all of it. It’s all of it combined. On every page, like air, Midnighter is breathing this life he’s built, able to blow off the head of an enemy combatant with the same effortlessness as snuggling back into his man’s arms. And how the artists maintain that level of ease in M’s demeanor and movements and expressions is just stunning. 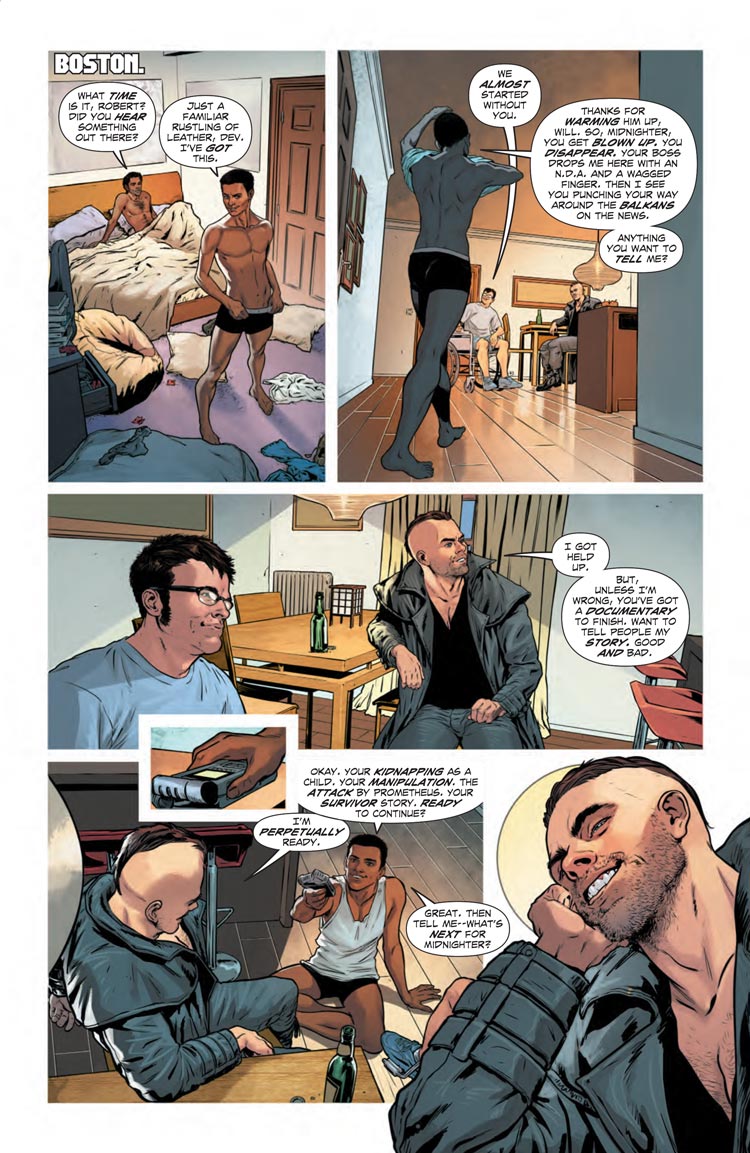 Easily my favorite scene of all, and the one with which I will wrap my look at this series (well, until volume 2 arrives in complete trade paperback form, that is) is one by Petrus, as it turns out. It’s Midnighter sitting at a kitchen table, beer at the ready, waiting to finish his chat with Robert the documentarian. Shoulders relaxed, dressed in modern day gay uniform (v-neck black t-shirt and jeans). Freshly shorn. And smiling. Smiling the biggest smile he’s had all series. And the question is, “What’s next for Midnighter?”

I can’t rightly say. But that image by Petrus, of M smiling for no other reason than an appreciation for the life he has, is just so inexplicably moving. This isn’t a tortured soul or a grim stereotype. M isn’t one-dimensional in love or in battle. He’s complex. He’s real. And he’s one of only a few gay male characters that’s broken past being a china doll of representation (or collateral damage of plot sacrifice) and felt real.

So, thank you, Steve and ACO, Hugo, Stephen, and Romulo. DC Comics and Midnighter’s fans. For giving us 12 issues of heartfelt and determined realness in a gay man, while simultaneously providing the visual roller coaster ride of our lives. I don’t know what the future holds for Midnighter, or for gay characters in general at DC. But I’m going to be holding on to this book, rereading, re-loving it, for some time to come. At least until something better comes along to replace it in my heart. It may indeed be awhile.