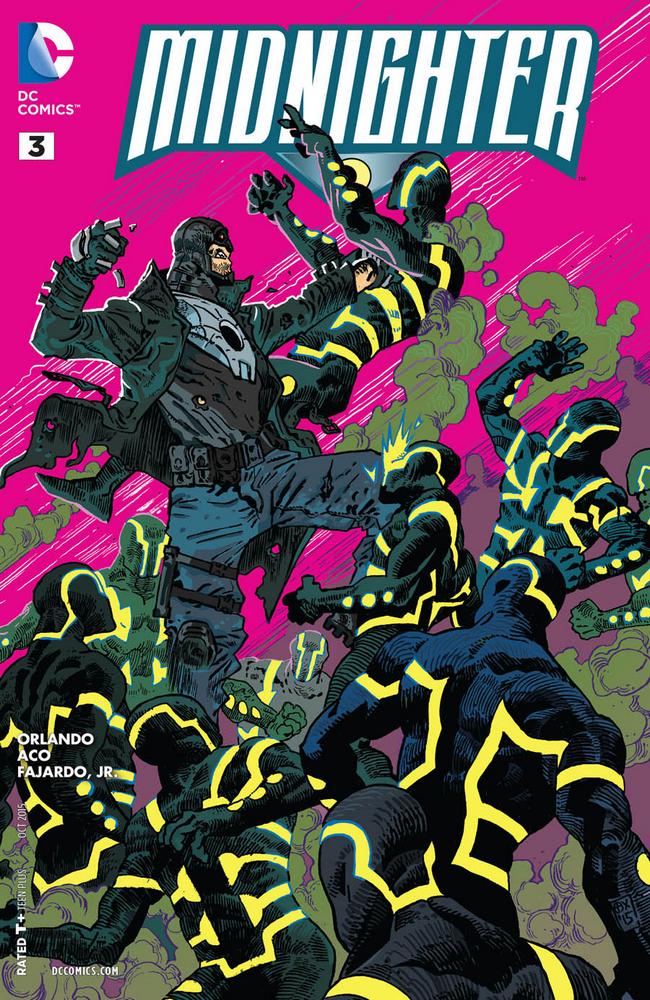 Midnighter just keeps getting better and better. The creative team so clearly care about what they are crafting and the heart they are putting into the work is practically tangible. Issue 3 gives us more of what we love along with another insight into the breakup of Midnighter and Apollo and a cameo on the final page that is going to have readers wishing that the book could have just been a few pages longer.

Now, I am not the first to say this, and it is unlikely that I will be the last, but Steve Orlando’s writing for Midnighter is on point. The script is funny, and the dialogue is just dripping with sarcasm. Orlando balances the action with glimpses into Midnighter’s life outside of ‘the office’ and it’s almost startling to see a superhero spending time with friends who aren’t part of their team. When paired with Orlando’s characterization of Midnighter, we are given an opportunity to view him from a new perspective, one that makes him appear more human than ever.

Aco returns to art duties for issue 3 and as always the attention to detail is spectacular. Aco takes care to include even the tiniest of features such as the treads on Midnighter’s boots and it’s so worth the effort because Midnighter is a beautiful book. The recurring and varying uses of concentric circles to indicate the use of Midnighter’s ‘fight computer’ are a fun touch that add a softness to what are essentially incredibly violent moments in the narrative. The overlay of smaller panels during fight scenes increases the tension and the depth making for more far dynamic sequences as they pull your eyes around the page.

Featuring a palette that spans the spectrum, Aco and Petrus’s inks are brought to life with colours from Romulo Fajardo, Jr. With highlights being the hazy purples used for the club scenes and the blue-white neon of Multiplex’s costume, Fajardo, Jr. does wonders to effortlessly tie together a story that spans such an assorted set of locations.

As a big fan of The Authority and Midnighter in particular I was both excited and apprehensive when this book was announced but 3 issues in and, honestly, I couldn’t be happier. I don’t know what to say other than Steve Orlando gets it, and as a result Midnighter (the comic) is darkly funny while Midnighter (the man) is completely charming. If you haven’t already picked up a copy you need to look in the mirror and ask yourself why. There is action, romance, science fiction, an openly gay lead, a whole heap of kicking and punching, amazing artwork, and excellent writing – what more could you want?