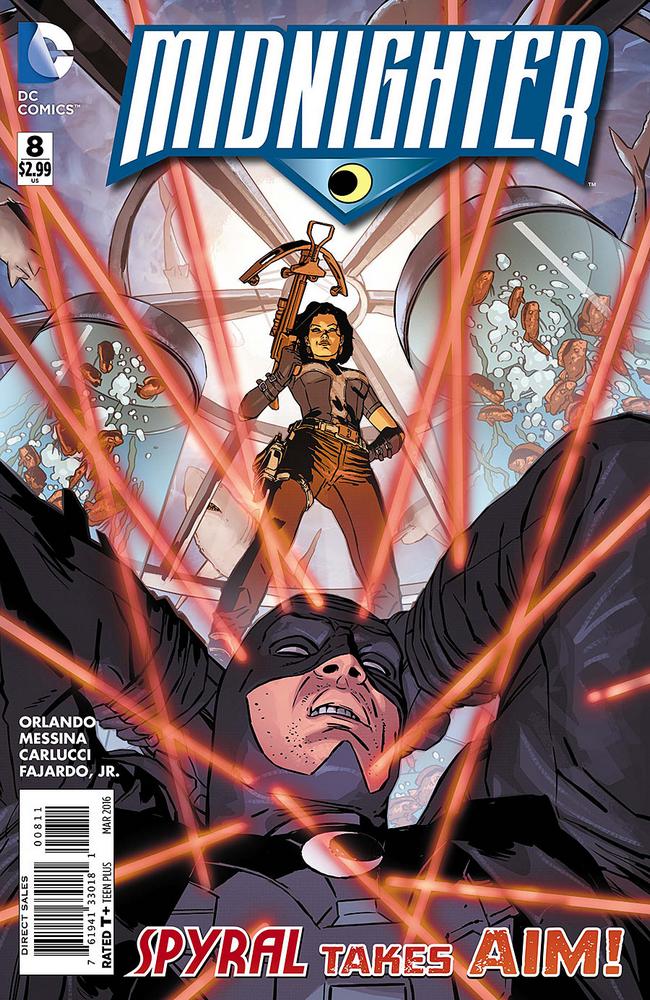 Sadly, there’s no time to lick his wounds. It’s a little downtime interrupted as Midnighter is called to Rochester to deal with some big game you have to see to believe — and an impromptu super-hero team-up that leaves a smile on everyone’s face. Yes, it’s the DC Universe return of Dominic Mndawe, the legendary Freedom Beast!

So, I have know. How could we have a comic featuring Midnighter and Dominic Mndawe without anyone making a “beast with two backs” joke?

Wow. That was nerdy even for me.

But that’s the pure joy of Midnighter #8, an interlude issue between two arcs (one that ended on a sincerely heavy note, by the way. How else would you describe finding out your boyfriend is a secret killer?) that puts the fun back into M’s life, if even briefly. Because if you’re as serious a dude as Midnighter, not to mention as proficient a warrior, the challenge of a chimera or two is bound to make you smile. Not to mention the open-shirt costume Mndawe is sporting. Yum.

For fans not up to speed, Dominic Mndawe is a character created by Grant Morrison to be the logical successor to the — let’s say, less sensitive — 1960s character of B’wana Beast, a white man named Mike Maxwell, who received an African elixir and used it to blend animals and have adventures. Assuming the name Freedom Beast (in contrast to the associations the word B’wana has with “master”), Maxwell’s successor Dominic Mndawe of South Africa takes on the role and power to create chimeras: an ethical, magical blending of two animals into one harmonious creature.

Writer Steve Orlando has a fondness for the lesser characters in Morrison’s toy chest already in evidence with the arrival of Prometheus in the previous arc, and the choice of Mndawe is certainly inspired. His positivity and confidence bounces off of Midnighter in a way that almost seems to lift the shadow of the previous issue’s tragedy, and frankly, he’s just cool, alright? Not to mention just a little bit flirty. Yassss.

It’s hard not to love the interplay between the two characters, particularly with guest penciller David Messina (late of the supremely excellent Catwoman run with Genevieve Valentine) giving us an absolutely stunning pair of men, and then some. But that beauty is tempered with compassion, with all the men in the issue being featured in these emotionally empathic talking heads moments. The opening scene with M talking with two other (adorable) men about his emotional state is so well crafted visually, with light and shadow played with such beautiful subtlety by Messina and his cohorts Carlucci and Fajardo.

It really reinforces the idea of Midnighter as a book that undermines standard expectations for (gay) male machismo and the brutality of violence when paired with the delicateness of emotion as Orlando and Messina are crafting here. For a book about a mercenary trained to kill with a single shot, there sure are a lot of feels.

A stunning spot in an likewise gorgeous run, this single issue story encapsulates what the Midnighter creative team have done best all along: the balance of fight with reason, action with emotion, with the sensuality of neither ignored. It’s the reason why this title remains one of the best on the comic stands today. It does its creators and its publisher damn proud month in and month out.