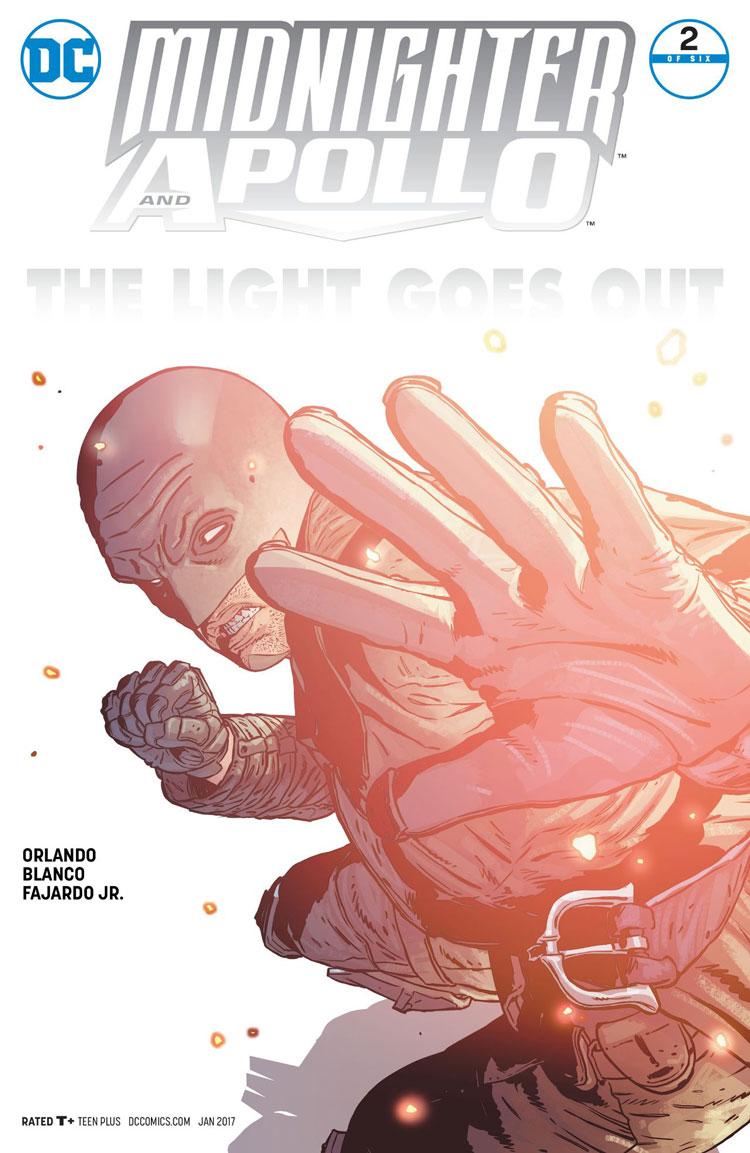 Apollo is dead, sent to Hell by Midnighter’s “father,” Henry Bendix. But when have you ever known Midnighter to give up on a fight? So he seeks out the one man who can put him back in touch with his lost love — The Sorcerer Supreme of Peru, Extraño!

From daddies to dads, Steve Orlando and Fernando Blanco are hard-core delivering everything I want in my gay super-heroes.

It’s not enough that he casts Midnighter and Apollo as these star-crossed lovers, now separated by the veil of death that can only be parted (in this case, anyway) by ultra-violence, sheer determination, and a computer brain. The fervor with which Midnighter pushes his way up and out of Bendix’s lair — mirrored later in the issue with Apollo’s own attempt to rise out of the pit of perdition — is so palpable.

Blanco starts the issue, in fact, with this crazy circular motif that keeps M in this sense of perpetual movement. It aptly foreshadows that idea of the seven circles of hell, that for M, this loss is a maze to be circumvented. So when we see Apollo later in the issue and his movements under Blanco’s pen largely move from horizontal page layouts to these extra long, thin panels that move upwards, the contrast in perspective is fascinating.

From Apollo’s perspective, this is no maze, but a deep, dark hole he needs to elevate himself out of. And with both of these understandings of hell and the couple’s predicament on display, you get a perfect sense of how different Midnighter and Apollo’s minds work. How different their worldviews are. It’s very nicely done.

Of course, the expanded role for DC Comics’ first openly gay super-hero, Extraño — now vastly rehabilitated from the caricature he once was — is a hugely welcome surprise. His additional role as adopted father to a young angel and husband to off-panel Hugh Dawkins, the Australian hero known as Tasmanian Devil, warms my heart to no end.

Giving Gregorio this sense of wisdom and respect may seem like a no-brainer, particularly for a queer writer on a queer-titled book, but it represents something thrilling about canon and history as well. Orlando has this deep appreciation for long-lost characters and ideas, drawing on Hitman, Millennium, Seven Soldiers, Underworld Unleashed, and more in a scant two issues. And yet, all of it feels fresh and accessible to readers whether you have the complete JLA collection (plus Classified #1-3) or just grabbed Midnighter and Apollo #2 on a whim for the beefcake.

As a strong close to Act I of the six-part mini-series, this issue continues to show off Blanco and Orlando’s work as simultaneously fun, frenetic, and deeply poignant. Like a bit of Shakespeare thrown in a blender with Dante’s Inferno, post-modern gay drama, and a few flying monkeys for good measure, Midnighter and Apollo #2 is giving me everything I want in a super-hero joint. Just give me more Extraño with his sophisticated, greying temples. Let me catch a glance at burly Taz wandering out of the bedroom. Write me some more of Apollo and Midnighter’s love story — so thick that they’re willing to punch through the afterlife for each other. I am so here for it.