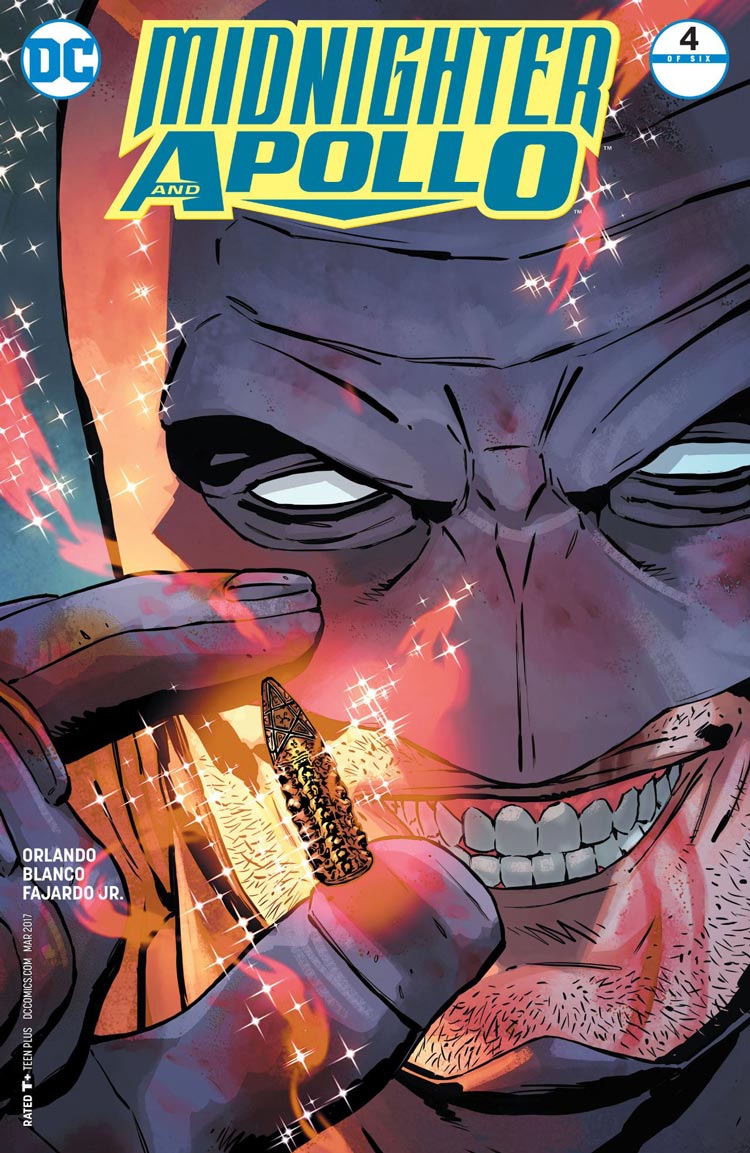 As Midnighter passes test after test in Hell to get closer to his lost love, Apollo proposes a challenge to Neron, the lord of the realm and his captor: tell him the true meaning behind the hero’s name or else, set him free. While Apollo uses his brains, it’s time for brawn to take center stage in what will likely be the fight of the century: Midnighter for the life and soul of his one true love.

Orpheus did it. Sandman did it. Heck, even Guy Gardner did it. So, if those lightweights could transverse the mortal coil to rescue the loves of their lives, there’s no way Midnighter isn’t going to try. The only problem? Every one of those stories ended tragically.

Steve Orlando has shown, over the course of 16 issues now, that Midnighter doesn’t lose. Case in point: he’s told the only way to stop Mawzir is with an enchanted shotgun that fires magic bullets. The gun? Destroyed? So what does he do?

He becomes the gun.

This is not just about Midnighter’s prescient ability to decode any situation and refigure it to his advantage with his computer brain. In fact, Orlando is very careful to indicate that M’s computer brain can’t serve him in Hell. This is a realm of magic. Of power. Not technology. Not computer trickery.

And the power, in this case, comes from love.

It seems like a totally cliché thing to say, especially as so much of the issue is Fernando Blanco’s showing us just how gruesomely blood-soaked the Midnighter can become in the wake of his opponents. In any other story, with any other protagonist, Blanco would be illustrating the power of rage or the power of pride — Neron has taken something dear from Midnighter, and that offense (to so many) could easily eclipse the love that inspired it in the first place.

Except here. Here is where love isn’t just love. It’s a point a number of creators make in the recent Love is Love anthology, and something I want to dive into in the coming days with some amount of care and precision. But for now, I can only say:

This love is more than that other love.

This love is love that’s been fought for, tooth and nail, every step of the way. You see it in every step M takes and every punch he throws, fashioned under Blanco’s rough hewn inks. And you see it in every muscle in Apollo’s back holding him up against the enormous weight of Neron’s interrogation, with a slightly gentler touch of the artist’s pen.

And as Orlando describes with Apollo’s childhood coming out, there was never a moment where love didn’t need to be clawed for, fought for, and defended against the ills of the world — every single day, his entire life. And every single day to come.

Midnighter and Apollo are all of us in the queer community who face odds every day that our parents and straight friends would crumble under. My parents’ love isn’t challenged every time they walk into a government agency. My sister’s love isn’t threatened every time hands touch walking down the street or in a crowded movie theater. My straight friends’ love isn’t diminished with every television show or movie they watch and know represents them.

A fight through Hell for love is dramatic and fantastic — and yes, in any other instance, prone to disaster. But Midnighter and Apollo’s love isn’t like every other love that attempted it before. Orpheus never had to love Eurydice as much as Midnighter has to love Apollo simply to be able to keep loving him in this world.

Midnighter and Apollo’s love is more. Our love is more. Because it has to be in order to survive. And Neron has no idea what he’s about to face. None at all.