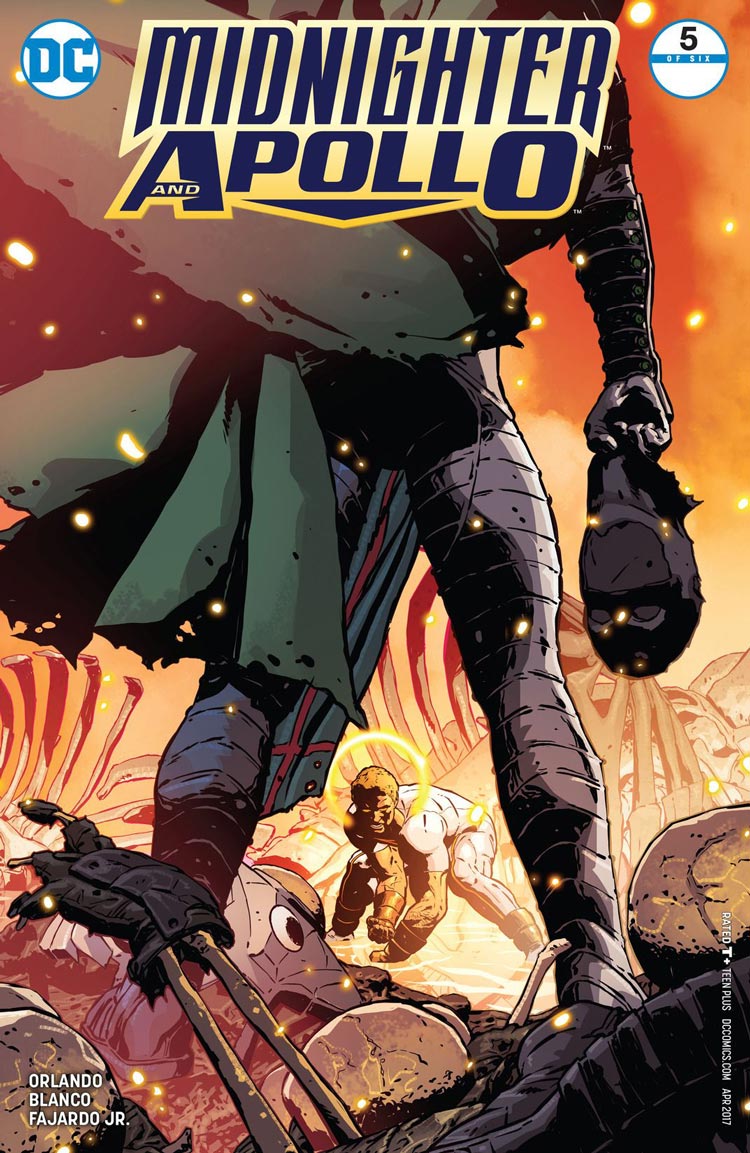 Midnighter finally reaches his destination: the center of Hell, Neron, and his lost love Apollo. But is the Lord and Master of the Underworld just something he can punch his way through? Um. Probably. He’s Midnighter.

Defiance against injustice is what most super-hero comics are about, sure. But there’s also defiance against the conditions of one’s life, against the inevitable, or at least the deeply undesirable. And then there’s the kind of defiance that’s baked into your soul. You have it at birth and it seethes inside you until you render yourself unto it, again and again.

That’s what we’re bearing witness to in Midnighter and Apollo: seething defiance matched with the cool comfort of “the good fight.” They’re not the same, you know. What drives Midnighter in Steve Orlando’s vision of the characters isn’t the same as what drives Apollo. Sure, the writer makes sure to show how the couple, newly reunited, influence each other. Apollo calms M, while M stokes in Apollo something he’s not that comfortable with: discontent.

The beauty of Orlando’s narrative, and so unlike so many other visions of queer relationships we’ve seen over the years in film and television (having seen scant in comic books at all), is that the discontent at hand is in no way about each other. It’s about the world, injustice, the condition of suffering. It’s all external, and yet the drive to defiance — it burns brightly from the inside.

This issue’s battle between M and Neron is certainly borne of that raw defiance. It’s barely personal, except that he is but one more thing between M and his love, but hardly dispassionate because of that smoldering from deep inside Midnighter’s soul. In some ways, it’s the perfect metaphor to have one of the bull host of angels bound to Midnighter for these precious seven minutes. But at the same time, I almost wouldn’t have been surprised if it had made its home in M’s heart all along, so fitting for the space it inhabited, albeit briefly. 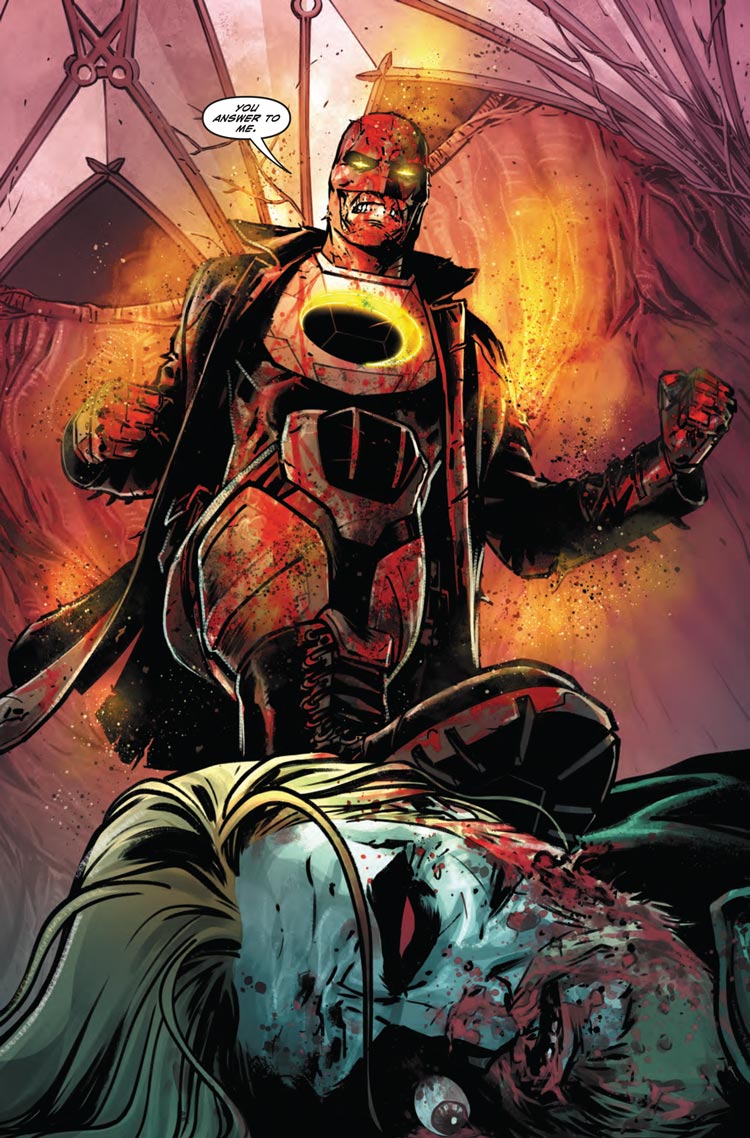 Artist Fernando Blanco portrays this sense of internal drive, amid a very bloody fight in the depths of hell, and balances that sense of horror in the environment well with Midnighter himself. Blanco never truly takes the focus away from what builds inside the two men, as they struggle to find each other and escape from a world where the rules are made minute-to-minute and can literally be twisted to make whatever outcome favor the house.

It’s brutal, this rendering of Midnighter, covered in blood and leather, and only feels more visceral by comparison to Apollo’s still pristine complexion and golden, smooth body. Either one could easily have gotten lost in the backgrounds, but both stand out for this glow about them.

Credit is due to colorist Romulo Fajardo, for this issue more than any that have come before, for breathing pure light and love into both Midnighter and Apollo. The subtlety of luminescence that crawls over M’s body is so beautifully layered, and makes the perfect connection with the deliberately underrendered form of his lover. It is Fajardo’s work that we truly get to experience that differential between M’s blinding defiance and Apollo’s warm, soothing calm, and it completely makes the book for me.

A beautifully bloody and endearing battle through hell for DC’s best power couple, Midnighter and Apollo #5 does far more than simply excel in its penultimate chapter. It shines under Orlando, Blanco, and Fajardo’s handiwork. Time for fans to find the drive inside us all to fight as well — fight for more of these lovers, their battle, and our enjoyment.