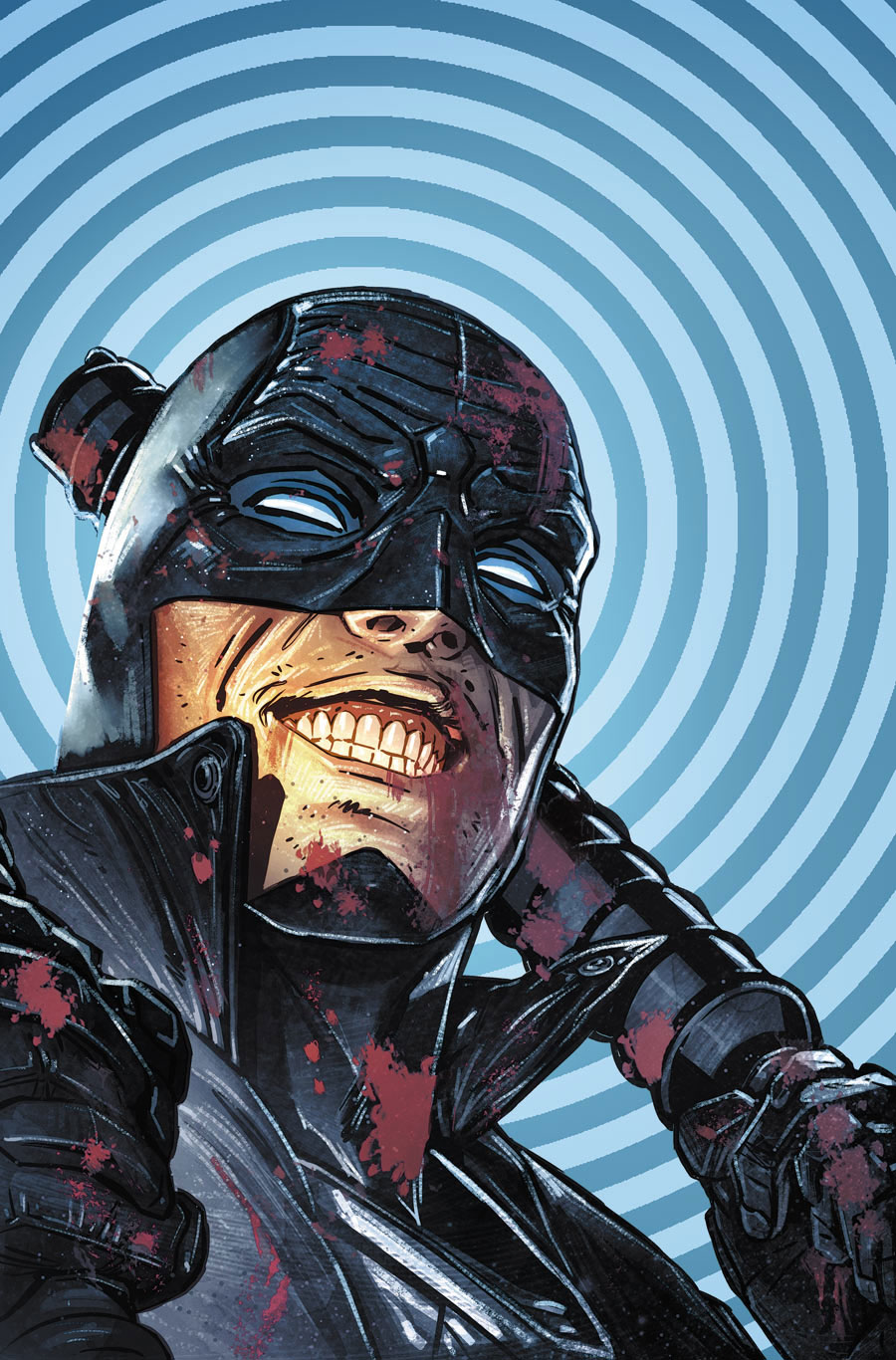 It’s impossible for me to write about Midnighter without it feeling personal. Indeed, as one of only two gay male characters to helm a solo, self-titled ongoing series in the history of comics — and the only one to do so in the genre I grew up breathing in like air, the super-hero — it feels deeply personal. It feels like it was made for me.

And normally, I’d say it was made for 12 year-old me, the kid who grew up scared of who he was and, in a pre-internet age, unaware that he was going to grow up to be happy and healthy and honest in his sexuality. Most books that strike me as personal touch that particular age in a similar way they do to so many fans. But not this one.

This is Midnighter’s year.

Writer Steve Orlando knows. He builds a narrative for M (as his boyfriends so affectionately call him) that takes him out of the security and emotional safety of his first and only relationship and does so in a way that’s not self-destructive, but not quite self-aware either. From the very first chapter, we get to see a devastatingly realistic portrayal of a young gay man coping with dating new men, when his entire understanding of his sexuality has been filtered through one intense relationship with his first love, Apollo. 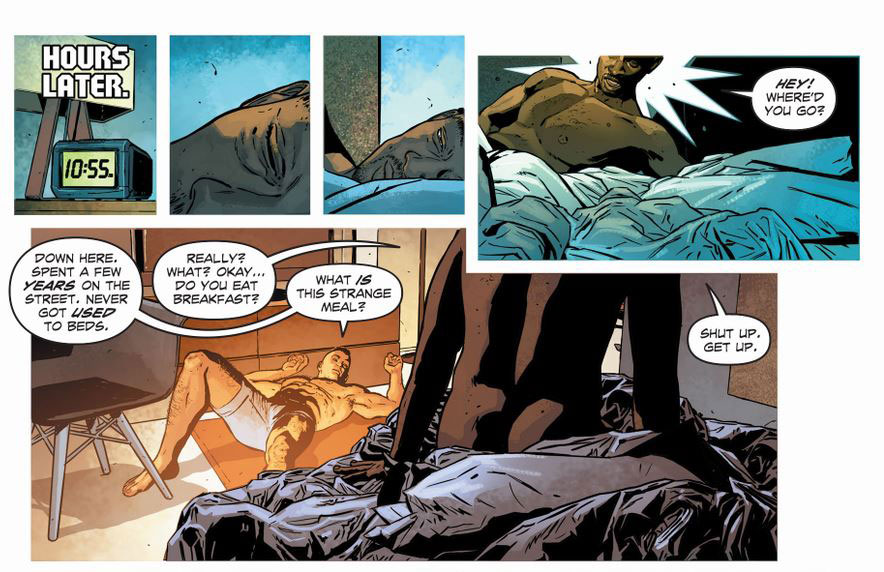 He’s savagely hot in the bedroom, but M fumbles when it comes to over-sharing and presuming too much too fast. I’ve had those dates. I’ve been that dude on those dates, not knowing how to moderate my feelings or at least stop talking about my ex-boyfriend so much with the guy offering to cook me breakfast. It’s so authentic it hurts, honestly. And that’s the beauty of this volume and why having that in a gay male lead is so meaningful beyond description.

It becomes such an interesting balance to see how vulnerable M is, particularly with new beau Matt, as he enjoys his life at home as much as the one where he’s beating down terrorists and industrial thieves. The comfort he slips into with Matt, who may bear a resemblance to his ex, who may be the most perfect guy he’s ever met for his non-judgmental nature, is endearing. It’s sweet. And it makes the rest of the book all the more brutal and normalized at the same time.

Because Midnighter isn’t the Punisher. He’s not a serial killer. He’s not crazy. He’s gifted. And Orlando makes it clear what kind of responsibility M feels these gifts hold him to. He has no problem killing — clearly — although is willing to suspend that activity for the good of his mid-volume partnership with reluctant best pal Dick Grayson. There’s an honor the writer infuses into Midnighter’s character, and we get how massive an effect that has on his actions through the reactions of the people he fights alongside or defends. His promise to return a little girl to her mother. To fight for those who need defending. This is what draws Grayson along to the kind of camaraderie and respect you’d never have imagined developing between the two in a million years. 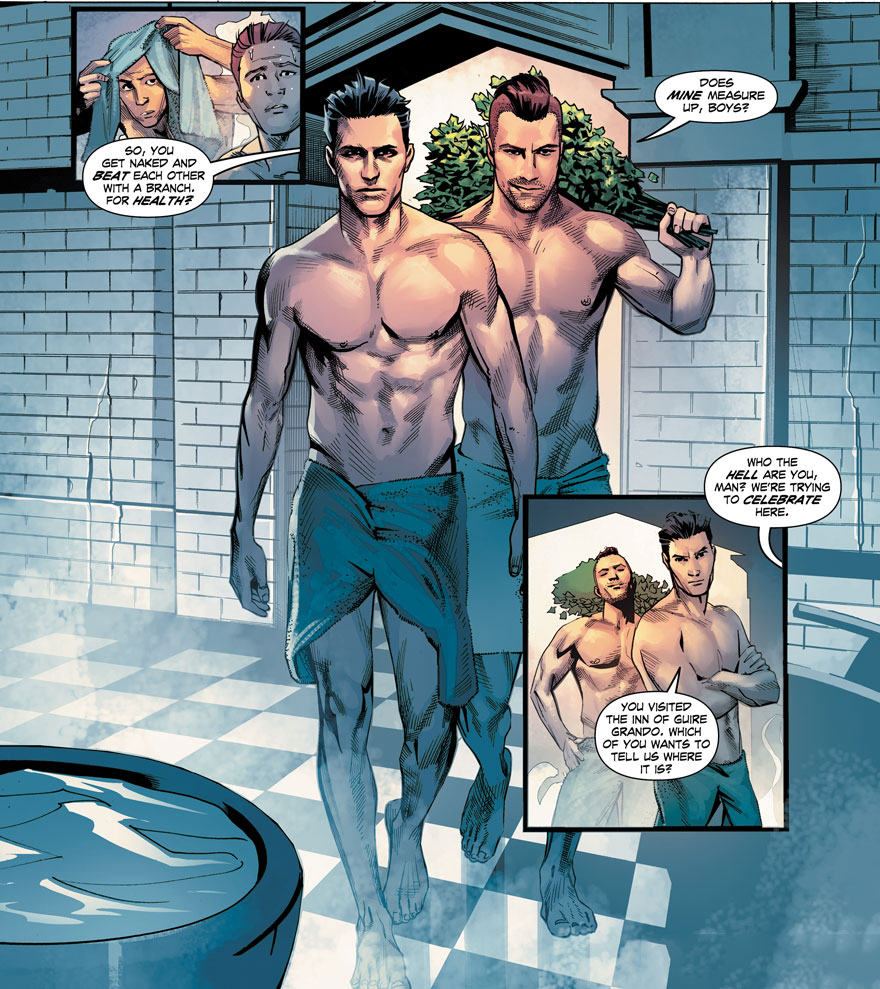 If it seems I’m talking about relationships and emotions and soap opera drama a lot, rest assured, Midnighter kicks as many asses as he fucks — a dozen times more, in fact. There’s no shortage of action in the sheets OR in the streets. But there’s no comparison for me as to which is more impactful, nuanced, or outstandingly conceived. The emotional trail Orlando leaves in this volume is simply perfection.

Nevertheless, Midnighter is a visual feast that takes my breath away, as artist ACO delivers never less than a hundred precise details per page to draw my eye. Every mini-frame tells a different moment in time, making these pages some of the most kinetic I’ve seen in a comic to date. Taken in sequence, every x-ray of a cracked skull and drop of a bullet casing combines to illustrate time moving itself, somewhat in slow motion, but always moving nonetheless. There is nothing static about ACO’s Midnighter. His athletic fluidity and computer-generated precognitive ability are fully manifest on the printed page.

The tender moments are something of a revelation as well, as we are treated to Midnighter’s sexual activity with the same vigor as his vigilante day job. The only difference? When M is with Matt, that ferocity of awareness falls away, and we’re left with a silence of mind that feels seductive and relieving. Those moments where M and Matt graze fingertips or even when Midnighter takes Grayson in a loving headlock (ha!) — they feel as pronounced and important as every time M splits open one of Multiplex’s many, many heads. 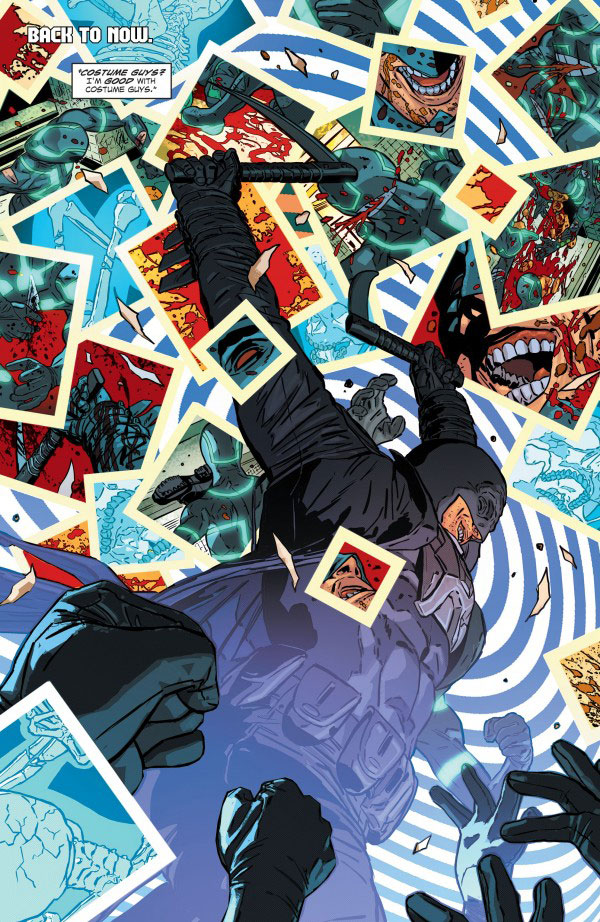 The art labors are shared on this volume, primarily with Stephen Mooney, in a move that felt a little troubling when read in monthly sequence. That feeling falls away in full volume, as Mooney’s more relaxed line and open page layout gives its own sense of relief as the chapters progress.

As Mooney handles the two chapter adventure with Grayson, we get a strong intermission of sorts from the narrative as a whole, really making that pairing have a more buddy cop feel. Then the book reserves those moments of heightened intensity from ACO for the main progression of the narrative where the stakes are a lot higher, both for M’s emotional life and his war on those who would attack him more directly.

I could go on and on about the intricacies of the artwork, or the careful precision with which Orlando lays down clues as to the main threat facing Midnighter from the first chapter onward. Everything and everyone is named so deliberately and rendered in dialogue so precisely that Orlando’s own script feels like a textual mirror to ACO’s page construction. It’s layers and layers of minute moments building on top of each other — like a house of cards you don’t realize is unstable until it’s far too late.

Midnighter is the book we deserve from super-hero comics. Its maturity and layered perfection doesn’t obscure its flat out fun, crazy, violent, or sexy moments. All of it becomes a tapestry that builds into something meaningful, like nothing that I’ve been blessed with as a gay man before. We can talk about how representation is important all day long, but it takes a book like Midnighter to realize how much I’ve missed out on in years of comic reading until now — simply because this experience just didn’t exist.

Buy this book. Dive into M’s world. Feel 21 (or 31 or 61, whatever the case may be) all over again. And revel in the fact that we finally have this to hold in our hands, this representation that’s far from just an academic exercise or whatever box to check off that old school comics dudes think we’re looking for. Buy this book. Because it needs to be the first of its kind, not the only. For all of us.