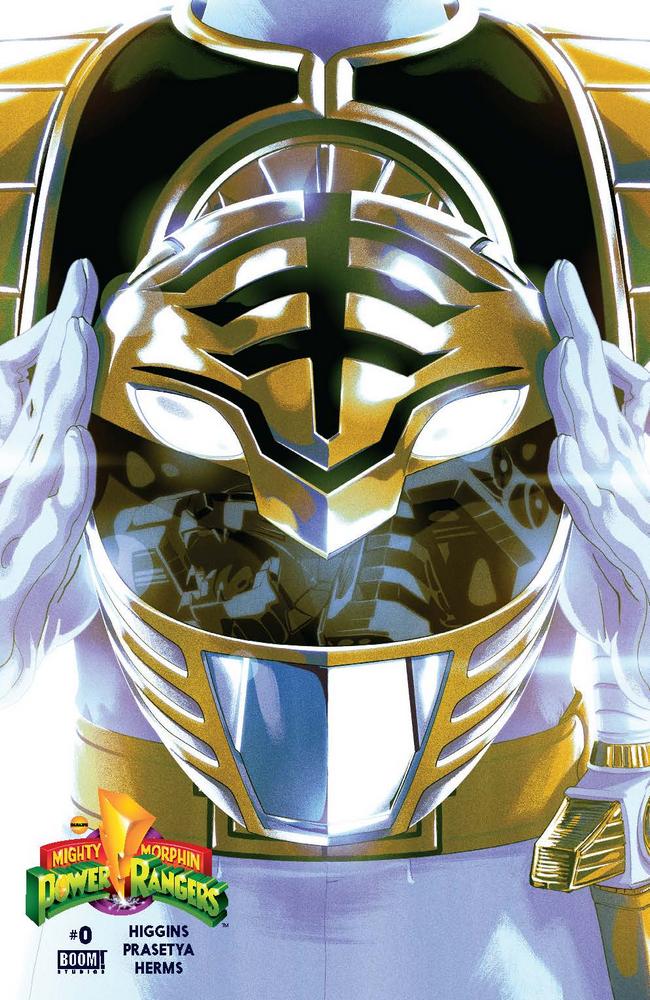 I’m in heaven. Seriously. My inner child is screaming for me to hold onto this comic and never let it go. Thankfully, that shouldn’t be too hard as this is a book made for me and the droves of 90s kids hellbent on reliving their childhood. Mighty Morphin Power Rangers #0, I thank you.

So let’s get to what’s go-go-going on with our Power Rangers. This series picks up at the point of the TV show where Tommy, the Green Ranger with his long locks of love, joins up with our fab five. However, he’s being mind-controlled by my queen, Rita Repulsa, best known for throwing lil’ monsters down to Earth and makin’ them grow. This zero issue really just sets the ongoing series up by introducing the Power Rangers and all their quirks, right down to Billy’s geekery. They fight a big bad, they get some advice from Zordon and Alpha, and the end credits roll. Except that we also get two great back-up stories as well, focusing in on Bulk and Skull and a Goldar battle. You know, all my favorite things.

So most of this is probably gobbledy-gook if you haven’t watched the show. This zero issue really just dumps you into the world of the rangers, and if you’ve never seen an episode before, you’re probably thinking it’s just a little crazy. However, if you’re familiar with the 90s masterpiece, then you’ll feel right at home. Home, that is, if someone dimmed the lights a little and pushed play on some ominous music. Mighty Morphin Power Rangers #0 sets-up the new tone for the series, which is surprisingly darker than the show. It’s still goofy, a little tacky, and filled with creatures referred to as the Putty Patrol, so you know, there’s that. But it’s also a little more adult-oriented than the previously child-friendly show. That’s not to say this isn’t accessible to the younger crowd, but it’s definitely aged up a bit, perhaps to tap into the nostalgia of the now-adults who lived and breathed this show as a kid.

The writing is pretty fun still. There are a lot of up beats, some trash-talking, some crazy and fun action scenes, and it’s apparent that the heart of the show is very much alive here. The main story isn’t the most compelling (yet, that is) but I think in time it will pan out solidly. I wished that there were a few deeper character moments, but hopefully those are to come. Higgins really does nail the tone of the fights though, and the action had me grinning from ear to ear. Orlando’s back-up Bulk and Skull story with perfectly nonsensical and class Bulk and Skull. It was light-hearted and silly, and it made me face-palm the way I remember doing as a child watching the dorky duo’s antics. Scott’s back-up story was also a ton of fun, presenting a classic Power Rangers fight line-up without missing a beat. It had all the right bravado and glorious fighting.

The art in this book is beyond wonderful. Prasetya nailed the main story, bringing the live-action show into the comic book world seamlessly. The characters have enough of the likeness of the actor counterparts, they are easy to discern on the page. The settings are gorgeous and detailed, and the monsters and Megazord are beautifully rendered. Every page captures the fun tone of this story, but there’s also a real beauty to the art within. The linework is strong and Matt Herms nails the color for this, perfectly illuminating the color schemes of the rangers, while keeping the tone a little dark, portraying the more mature shift of this story. Corin Howell’s (with Jeremy Lawson colors) Bulk and Skull story was much more cartoony and perfectly evoked the goofiness of stories involving these guys. For me, however, the standout artist was Daniel Bayliss, who illustrated the third story. His art was really beautiful, perfect for action sequences. The fights were really gorgeous to watch as characters move around like ballet dancers on the page. Finally, Ed Dukeshire’s letters (with Jim Campbell on the second story) fit the story perfectly. The color coordination went a long way in making this story a seamless read.

Alright. So I clearly have a lot of nostalgia for the Power Rangers. But was it good? I think so. This isn’t a groundbreaking comic, but it certainly is fun on every page. It will hit all the right notes for fans of the series and might make you want to fire up the episodes for a rewatch. Sometimes, revisiting the past can make you grimace as you try to remember why you liked the thing you did, but Mighty Morphin Power Rangers #0 does none of that. This is a solid book. Gorgeous art, killer fight scenes…it all comes rushing back in the best way.