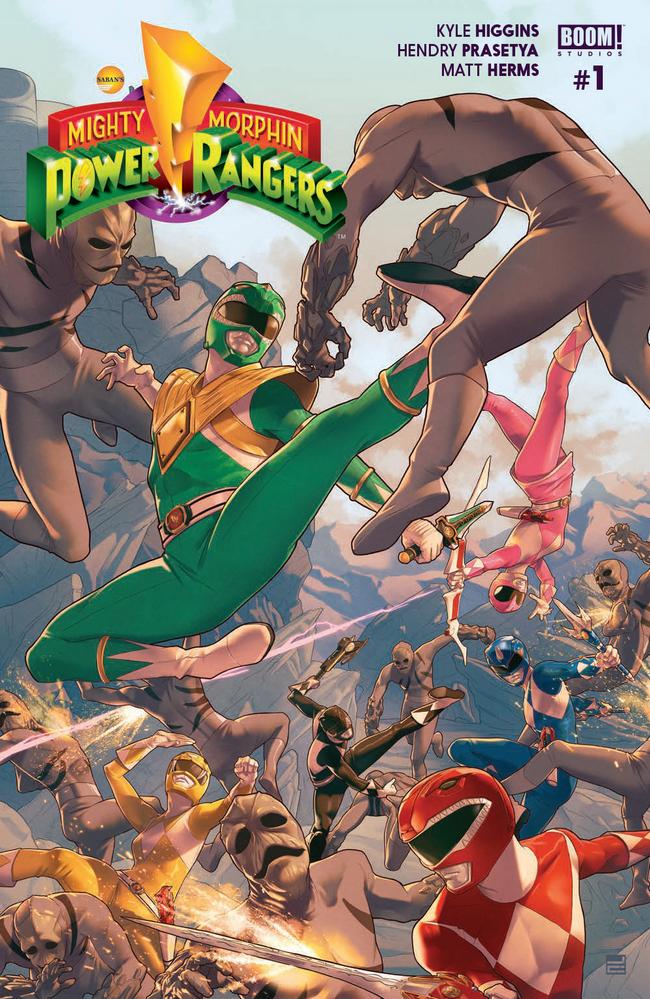 Bulk and Skull catch us up on the goings on of Angel Grove, revealing the menace of Rita Repulsa and her creation of the Green Ranger, who would eventually defect to our team of teenage heroes. Each of the Rangers has to manage everyday life, from sleeping in class and detention to seeing apparitions of a space witch trying to manipulate them. Tommy is continually unsettled through the issue, leading to a confrontation with a dangerous force making a dire threat.

I knew coming into this series that I’d have to keep my sense of nostalgia in check, but the story was engaging to the point that I really didn’t have to. What we have in Power Rangers #1 is a dive into the lives of the Rangers as millennial teenagers. I wasn’t sure whether to expect the camp and period feel of the 90s as I read through the issue, but I was delightfully surprised to see a fresh and modern take on the Power Rangers. They didn’t feel like the characters I watched as a 7 year-old, but more like I did when I was in high school. The only difference being that, unlike Zack, I never went to detention for falling asleep in Calculus (the Devil’s math).

Kyle Higgins takes us inside the mind of many of the Rangers. In particular, Kimberly and Tommy take the spotlight, and Tommy’s own battles with Rita seem to be driving much of the story. All of the characters felt like I could encounter them in a hallway lined with lockers in between classes, while still keeping the spirit of the original characters. Higgins’ exploration of the doubts and challenges of the Rangers adds a different take beyond the Monster of the Week feel of the television series, an important change that I think will help this series thrive. To take something like Power Rangers and recreate it in a new medium using classic characters is no easy feat, but Higgins masterfully translates the teenagers with attitude to a modern time without losing their attributes.

The art of the main story is darker than I expected, but contributes to a feel for the series that seems to be integral to the overall story. Gone is the camp from the “original” series, and instead there are images that are much more serious and emotional in nature. Along with Higgins’ updated spin on the famous teenage superheroes, Prasetya and Herms create visages of the Rangers that look like the teenagers we see today.

Steve Orlando must have watched an episode of Power Rangers before writing the back up, because Bulk and Skull are truly in rare form. They are wacky and energetic, dedicated to becoming heroes in people’s eyes. While Bulk and Skull frame the main story, their presence in the back-up provides a comedic juxtaposition to what feels like a much more serious story moving forward. After reading Power Rangers #1, I hope Corin Howell and Jeremy Lawson work together on a future comedy series. This duo on art is able to convey the misguided optimism of our bullying pair of characters, while also capturing their emphatic ineptitude within a couple of pages.

I thoroughly enjoyed Power Rangers #1 not because I dreamt of being a Power Ranger (and made a paper airplane called a Falconzord long before its first appearance stateside), but because it’s a great look at teenagers being superheroes while dealing with teenage problems. Were I to have no history of the Rangers before reading this issue, I’d be hooked and invested in seeing where the story moves. There’s a solid foundation for the series going forward and I think everyone should jump on it, Power Rangers fan or not. This comic really could be shaping up to have an awesome story grounded by the realism of teenage experiences, so it is definitely worth picking up this week.