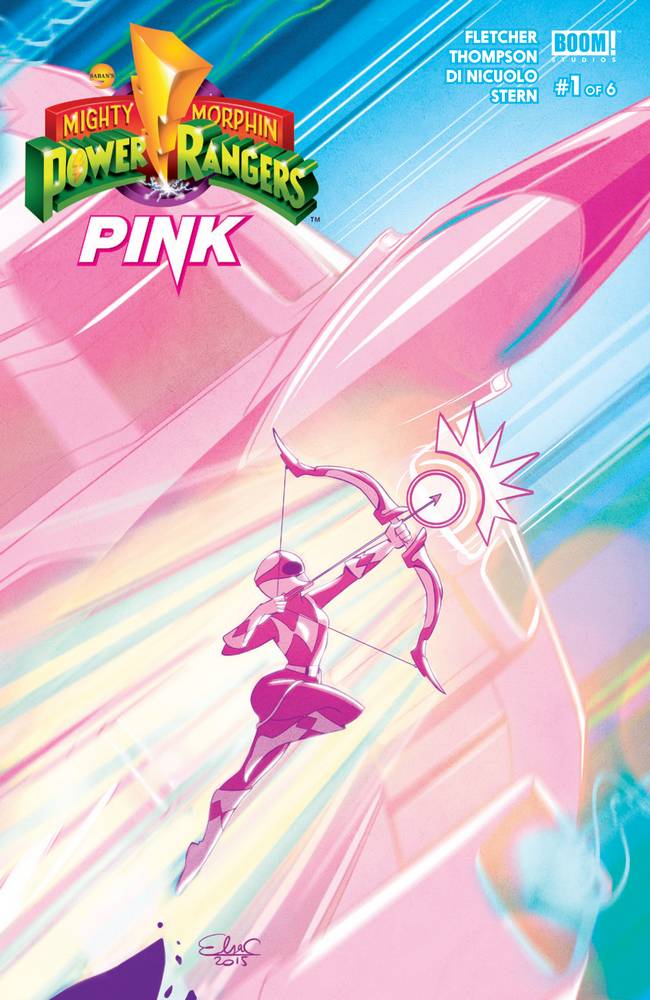 The biggest trend I’ve found in comics over the last couple years or so, is finding myself with a sudden interest in the most improbable properties and characters: The Punisher, Red Sonja, Vampirella, Nighthawk, Karnak, Jem and the Holograms, Prophet, and Glory among them. Mighty Morphin Power Rangers is probably the most surprising one so far, and that’s saying something in a list that includes two Rob Liefeld creations.

To give you some idea of how old I am, the last time I had any investment in the Power Rangers was when concerned parents were floating the idea of having it pulled from television for being too violent. But when Brenden Fletcher, a key collaborator in Gotham Academy, the Batgirl of Burnside, and Black Canary teams up with Kelly Thompson, the writing half of the duo that made Jem and the Holograms both relevant and hella queer, it’s time to sit up and take notice.

The only details I remember from my youth about the Pink Ranger is that her name is Kimberly and she’s a gymnast, and that’s already more than you really need to know to be able to pick up this issue. The series finds Kim having moved on since the new generation of Rangers have taken over, pursuing gymnastics full time in Europe and doing spectacularly well at it, but that’s the last thing on her mind.

The issue opens very much like Fletcher’s debut on Black Canary with Annie Wu, introducing Kim sitting on a bench in an empty locker room. Instead of a quiet moment of contemplation, she’s anxiously trying to reach her parents who failed to show up for the recently finished competition.

It’s a particularly clever moment because the towel around her shoulders conceals the multiple medals around her neck until her teammates round the corner, jubilant at the victory. Kim is clearly a prodigy, but it loses meaning for her without being able to share it with her family, highlighting the seeming dissonance of a solo series within the franchise.

Aside from Tommy, the too cool for school Green/White Ranger, MMPR has pretty much always put teamwork and interdependence over individual achievement — and that’s evident in the dynamic setup for Kim here. She competes on her own in gymnastics, but remains part of a larger team and sticks close to her parents, who moved out to France along with her.

With her parents missing, she’s forced into action on her own for basically the first time in her life, but much to the creative team’s credit, this isn’t a book about a reluctant heroine in an era brimming with them. Kim is a no holds barred badass, and they waste no time demonstrating it by having her leap into action by whipping through the French countryside on her motorcycle.

When she arrives to find the seaside village deep in the throes of a Call of Cthulhu reenactment, she steps up to the plate again and pulls out an impressive stash of gear that replicates what she had as a Ranger. Topping off her civilian battle outfit is a harness mimicking Furiosa — which is a pretty great reference given that both writers have delivered recent references to that franchise in Black Canary #3 and the first Jem annual respectively — but I’ve also been constantly typing “MMFR” instead of “MMPR” and I bet I’m not the only one.

The one choice I’m not completely sold on in the issue is that when things take a turn for the worse, Zordon finds a way to let her temporarily tap into the power to become the Pink Ranger temporarily to let her fight her way to the source of the fishmen who kidnapped her parents, somewhat diminishing the great non powered look she just got, but it’s a minor quibble.

Even Vampirella hasn’t fully retired her old outfit and I can sympathize with fans who wanted to see Kim in the iconic look on more than just the cover. The more important point is that they demonstrated the fact that it isn’t a crutch and doesn’t define who she is or what she’s capable of without it. 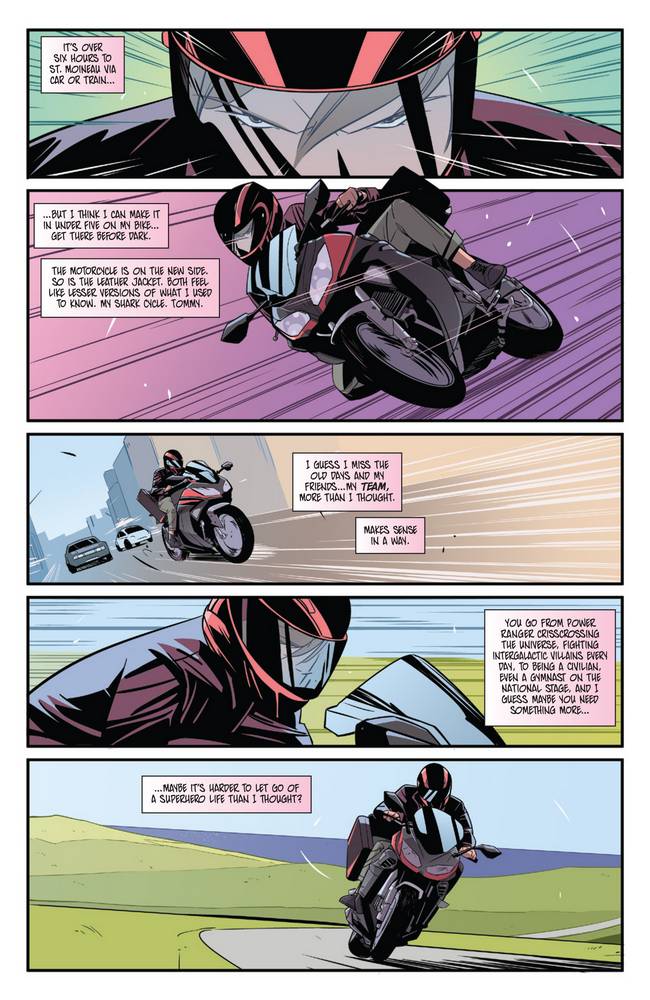 True to Fletcher’s reputation on Black Canary, Kim gets to show off some impressive and well thought out moves that leverage both her bow and her gymnastics skills. The highlight, thanks to Di Nicuolo’s sharp execution, is Kim landing a superman punch on one monster and simultaneously connecting with a back kick on another one. It’s utterly ridiculous in practice, but it also displays a keen understanding of how to properly throw a superman punch. It’s the kind of thing that warms my fussy fight fan heart.

What really defines this as a full throttle action piece is Daniele Di Nicuolo’s sharp, angular lines that convey up a sense of urgency and motion similar to John Timms or Stuart Immonen. Some of it comes in the nuances like really selling how badass Kim has become in how hard she leans into turns on her bike, but Di Nicuolo’s key strength across the issue is how he manages the background to maintain a specific sense of space through the action scenes.

Mise en scene is a very key part of the storytelling in choosing to place Kim in France and he wisely devotes no more than a single page to deliver the details and ambiance of the architecture, using a looser shorthand for what’s established there to ground the fight sequences and keep the action legible.

Sarah Stern’s colors are a welcome treat that reward multiple readings as the subtle elements of them truly come out when separated from the breathless pace of the issue. While Di Nicuolo’s figures are largely confined to natural lighting offset by cel shading that matches the dominant color of the page, she keeps it fresh by letting the emotional beats and pace of action dictate the palette.

While the standard approach of bathing entire pages in the glow of various non-natural colors in the 1980s through to the mid 1990s wasn’t always effective, a lot of the magic of the medium got lost when digital coloring took hold and desaturated palettes that rely mostly on natural lighting began to dominate. Stern wisely holds to shades of pink, peach, and purple as the neutral tones to establish Kim’s obvious connection to pink as being the bedrock of the world she inhabits and punches it up with luminescent greens and yellows to accentuate the action. Aside from the true standouts like M. Victoria Robado’s ambitious work on Jem and the Holograms, that level of attention to detail and commitment to an aesthetic is rare to encounter on licensed titles.

The only real shortcoming the issue has is the sometimes dense and redundant narration relative to how much both Fletcher and Thompson prefer to lean back and let the visuals drive the story on their other titles. Easter eggs that they’d leave as a subtle wink on other titles are spoken out loud here and superfluous details they’ve omitted elsewhere are talked through here.

There’s a certain amount of whiplash coming from either Black Canary or Jem and the Holograms, books that are bolstered by their willingness to live quietly and stew over a moment between elaborate, punchy set pieces, but the audience for MMPR: Pink skews significantly younger than Black Canary and comes with a lot more continuity baggage to unpack than either Jem or Gotham Academy. It’s understandable and likely a necessary evil.

It’s a testament to the deep reservoir of talent in comics right now that licensed books have risen from the sludge they embodied less than a decade ago, especially considering that this book finds Fletcher fresh off a pair of critical darlings at DC and preparing for both Motor Crush with his former Batgirl team and a new season of Gotham Academy, while Thompson is a quickly rising star at Marvel and over a year deep in Jem and the Holograms.

Thanks to a bold new direction and an insurgent creative team, this is definitely not your senpai’s Pink Ranger.