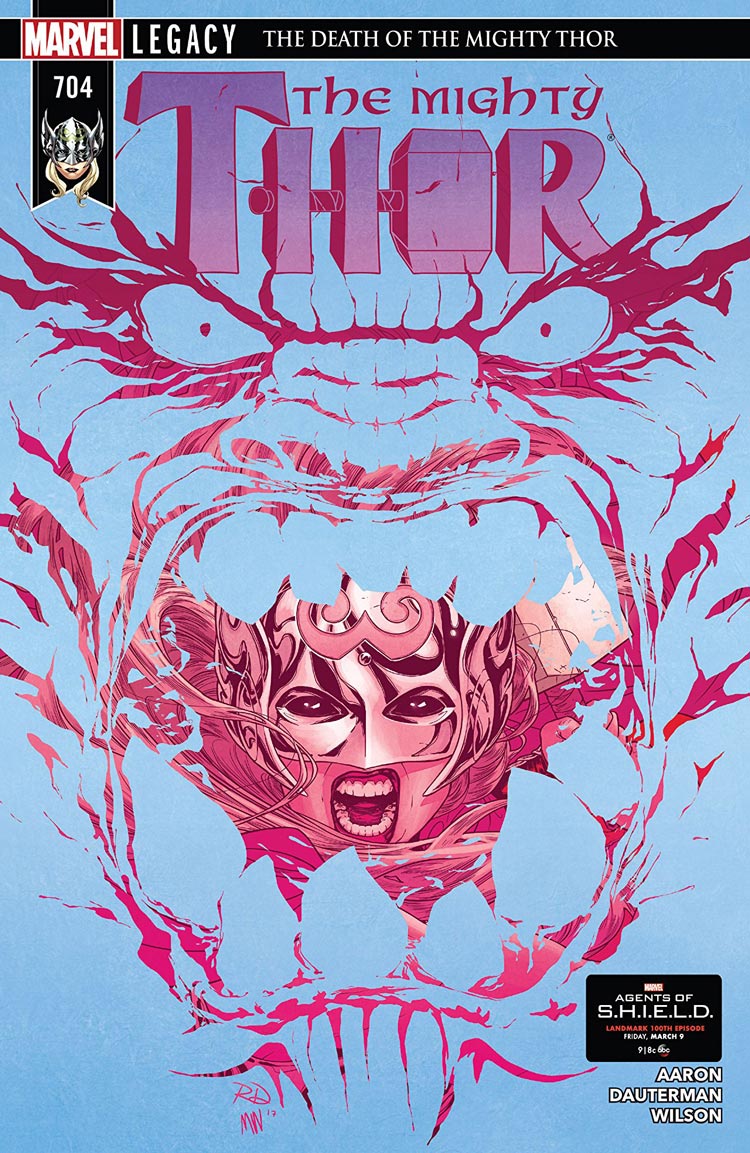 At times, there are stories with predictable major plot points, and so the readers’ opinion of such stories can often be based partly on how well the creative team manages to convey what it seems they intend to convey.

Ever since Jane Foster was revealed as the secret identity of the new Thor more than two and a half years ago in Thor volume 4 issue #8, fans have expected that there would likely be a storyline in which Jane has to make a choice between her own life and saving others. In a very big way, she’s been making this decision in every issue, as she has been transforming into Thor despite the danger to herself; Mjolnir wipes out the effect of her chemotherapy treatments and the transformation back into her human form leaves her sicker than she was before.

In the previous issue #703, there was the dramatic moment of Dr. Stephen Strange telling Jane that one more transformation to Thor would kill her, resulting in Jane’s friends convincing her to stay in the hospital and promising to fight in her stead. In issue #704 “The Gospel According to Jane,” we see the beginning of what we know (from the title of this story arc) is going to be the end.

Jane’s story has taken her from an arc that revealed her identity to subsequent arcs with her gaining experience as a super-hero and participating in the Asgard/Shi’ar War. Throughout the story, her cancer was always there in the background, and now this is the inevitable end. Jason Aaron’s writing throughout has been lots of fun, giving us lot of humor and dramatic moments in the conversations and fight scenes between the characters. This issue especially has multiple pivotal and heartbreaking moments in Jane’s life, in which we see her hurt.

Russell Dauterman’s artwork throughout the series has been great as well. Personal conversations between characters are effective in portraying the characters’ emotions and huge battle scenes are grand in scale. Some of the most fun passages in the story, in terms of writing and artwork, are some passages in the hospital between Jane and anther resident and some moments of levity with Thori the Hel pup.

Yet, despite my love of this series, there’s been something missing from this arc that I think doesn’t make it quite as impactful as it should be. Some combination of the expectations that come along with a Death of [Famous Character] storyline, the predictability of the major twists, and the refusal to slow down the story for more character-focused moments leaves me wishing there was something more to the story than what we’re getting.

It’s a story that’s technically decent, but which feels like it could have been more effective if done differently. The recent arcs have spent a lot of time setting up plot pieces with a lot of characters, and so what should be a very suspenseful and emotional time in the story seems rushed; we cut away to Asgardia in passages which are meant to be suspenseful but don’t feel it. (After all, Asgardia is a realm of immortals that has survived worse and will likely survive this story; Jane is mortal and the story would like us to believe that she won’t.)

There are excellent passages in this issue that could have been better if the topics mentioned in them had been given more time, either earlier in the series or in the current arc. Relevant themes are brought up – faith in god(s) during difficult times, whether the gods deserve worship – that give weight to the story and which it would be interesting to see addressed sincerely and at length in a superhero comic, especially from the point of view of a mortal character who wasn’t usually a superhero.

In trying to balance multiple characters and plotlines at a time in the story that should be very much focused on Jane’s morality and actions as a hero, I think there are ways in which the issue doesn’t do as good a job as it could of portraying the themes and messages it seems to want to convey.