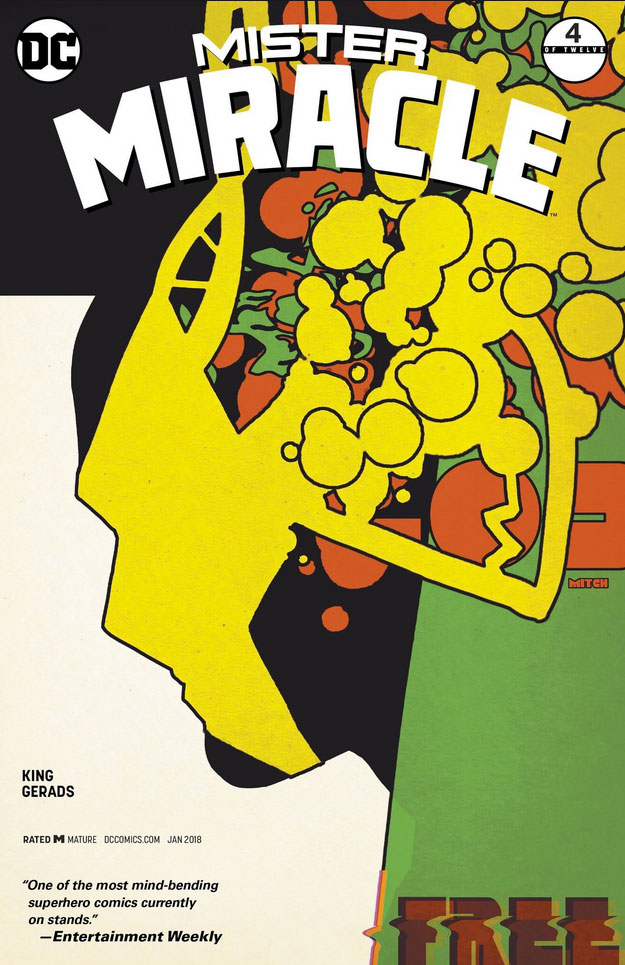 Scott Free is not having a good year. And frankly, I get it.

After attempting to take his own life, Mister Miracle has been pulled between fighting a seemingly impossible war for a leader he doesn’t trust and continuing his daily life as a performer, husband, and relatively normal man who’s also a New God. Now he’s being put on trial as an agent of Darkseid. Is he? Does he even know what he is anymore?

Like I said, it’s been a really bad year in America. A crushing year in terms of anxiety and fear. We all know the external force that is burgeoning anxiety. I feel stuck between fear for myself, guilt over those who have more to fear than I, and a relentless desire to want to fix it all. Fight. Make it right. Escape, in the large sense — not individually, but collectively — from the unraveling happening right before all of our eyes.

But fighting doesn’t make what we’re experiencing any less dangerous. Even if it feels like it does.

And something my therapist said — after a few weeks of listening to me verbally vomit over 12 months of fear, insecurity, and vulnerability — really struck me, and seems particular apt in this context.

I wish I could tell you that you were delusional or paranoid. I’m sorry that I can’t.

That is a profoundly scary statement.

The life trap Scott Free has found himself in is more than him and less in many ways. But at its root, it’s hard to see it as paranoia. As simply imagination. King, Gerads, and Cowles have so woven Scott’s mania as a thoroughly maddening web of distrust, fear, and even misdirection and disruption.

But they have also made it feel unquestionably, undeniably, down-to-the-core real.

The prime sequence in issue #4 is an inquisition, a trial conducted by the new Highfather Orion to determine if Scott is, in fact, an agent of the Anti-Life. Question after question in true/false format, designed for only one outcome, and Scott knows it. As sure as shackles, the inquiry moving back and forth tightens its grip on Scott and its staccato pace across the nine-panel grid, like a game of ping pong, gets increasingly nerve-wracking.

It’s one clear example how the entire creative team melds to work in unison to achieve this kind of tension. Given King’s background in the CIA, there’s little surprise in his expertise in this kind of interrogation, as the dialogue almost feels like a tightening knot the closer you get to its end. What’s more delightful is the perfect concert Gerads and Cowles both exhibit in making the scene work.

Gerads already delivered a nice bit of foreshadowing early in the issue with the physical beating of Lightray. It’s brutal and transparently felt, from tightened stomach muscles to convulsing face. And even once the physical confrontation is over, the after effects linger in every panel Lightray appears in. This is a character that is nothing if not charming, light, and airy, now brought down to earth by a bloody beating. It’s a fair parallel for what Scott is about to experience.

And so we see it play out with Gerads pencils as Scott’s stoicism begins to crumble under questioning. It is such a subtle manipulation of line that without Cowles’ steady balloon placement — giving this truly chilling essence to Orion’s inquiry — you might be hard pressed to take it as seriously as we must. It’s the tiniest of shadows and wrinkles that betray what will eventually be Scott’s complete breakdown, which Gerads guarantees I feel in my chest.

This panic, this explosion from a now raw psyche, is so powerful that it’s almost not contained by the panel grid. And seeing how everything gets smaller for Scott, first by being embraced by Barda — a giant by comparison — and then by a closing of the panel itself. It’s a magnificent sequence, punctuated by captions lifted from the original Mister Miracle #4, by Jack Kirby himself. A repeat of history. A trap already designed. A predetermined outcome.

And that’s one of the biggest fears, isn’t it? Inevitability. The impossibility of agency. The life trap that constricts no matter how hard you push against it. No matter how much rage or love or indifferent snark one expresses in the moment. And all of it occurring concurrent with the mundane.

The vegetable platter King inserts into these seemingly dire circumstances is no accident. It’s an enactment of everything we go through that seems utterly ordinary while the abnormal crashes down around our heads. It’s a momentary sustenance as the anti-life takes hold. It’s the package that comes for a show that Scott might not even live to perform. But we live both worlds at once: the mundane and oppressive. The human and the monstrous. The interior and the war.

Is there a win in there somewhere? Escape — resistance — feels thrilling until it takes its emotional toll. It’s exciting until the stakes seem completely stacked against you. And then all that’s left is fear. Hate. Anti-life.

A book that will likely long be looked at for its emotional depth, brilliant pacing, and utterly complex tapestry of what makes a man like Scott Free tick, Mister Miracle continues to rate as the best read in comics today. King, Gerads, and Cowles have transformed Kirby’s New Gods mythos on an emotional level to meet the demands of a culture 40 years older and devastatingly troubled. And what an overwhelming and mind-shattering trap it all is.