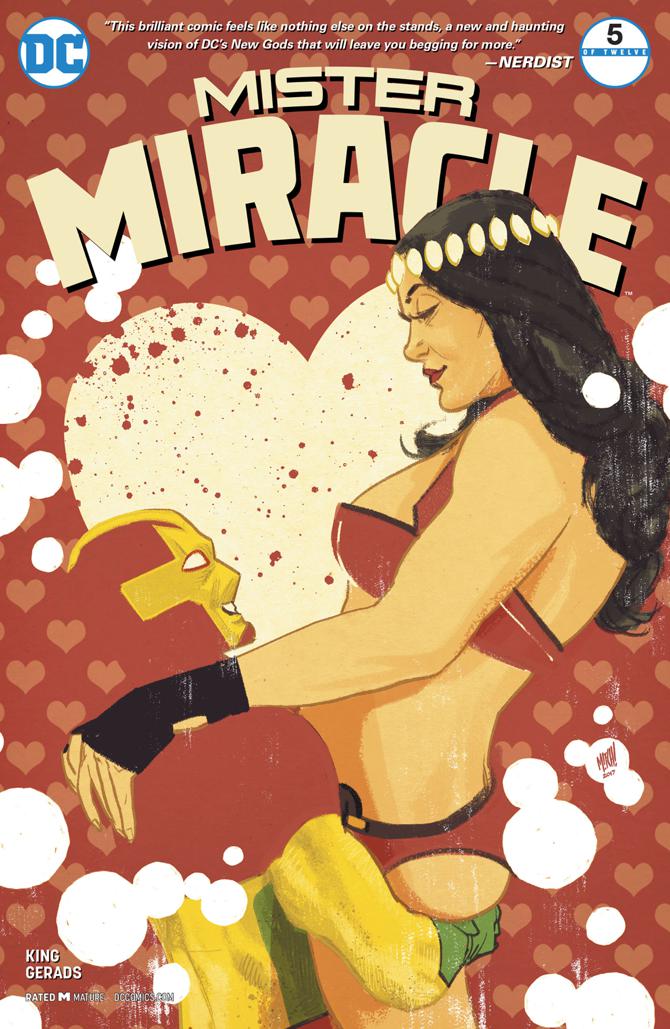 You’re Scott Free. Today is your last day before execution.

This is Mister Miracle #5.

To say that Mister Miracle has been brilliant thus far is such an understatement, it borders on stupidity. This series leaves “brilliant” in the rearview mirror, blazing trail into methods of storytelling and topics avoided by “typical” superhero books, while simultaneously paying homage to the transcendent talent that was Miracle’s creator, Jack Kirby.

King and Gerads continue their streak of brilliance with issue #5, a look at the day before Scott Free’s scheduled execution. What astounded me is how King and Gerads captured the utter bizarreness of this situation beautifully, highlighting a myriad of emotions that both Scott and Barda go through in a single day. This issue is filled with humour, passion, banality and what has become “trademark” Mister Miracle moments that occur outside of the realm of the DCU “reality”. I found parts of this issue heartwarming, some aspects straight up hot and steamy, and others unsettling…and I think I just found the tagline for the series. Feel free to use that one, DC PR, it’s on the house…

Gerads artwork is stunning in this issue, as it has been in every chapter of this series…and the whole of 2017. His evocative work gives readers an amazing insight into the relationship of Scott and Barda, from their passionate sex life to the mundane closeness of spending time together in traffic. He captures the manic side of Scott’s mind and the warrior strength of Barda with stunning visuals, images that are as jarring for readers as they are for these characters to live. On the flip side of the jarring work, Gerads pencils two of the steamiest sex scenes I have ever read in comics, evoking a passion between these two characters that is palpable without ever needing to show either character’s nude bodies for shock value. He makes an amazing case for the importance of sex in storytelling (especially about a married couple like Scott and Barda) without using it as a cheap marketing ploy to get immature fanboys off. This is mature, passionate sex that is all grown up, and an integral part of this story.

Not many artists can make me feel, to capture my attention so much that my blood pressure rises or I feel uneasy. Gerads work made me feel as unsettled as Scott and as pent up and enraged as Barda throughout the issue. When you can make me feel like two characters raised on Apokolips, you’ve done your job well as an artist.

Tom King’s words are in perfect sync with Gerads’ skilled visuals, this beautiful artistic partnership between the creators somehow becoming stronger as time goes by. King somehow nails the utterly bizarre situation of Scott’s final day prior to execution by blending utterly mundane comedy with long, poetic speeches that do not feel over the top or too dark at any point. These two characters are living their day is if Scott will die tomorrow, that thread weaving its way through every single word, yet this issue somehow isn’t depressing as all hell. Don’t get me wrong, it’s heavy, but King doesn’t languish in the depression of the situation. He taps into every emotion that exists in the human spectrum, showing readers the most authentic, real day they will read in comics in 2017. The fact that there are mother boxes is irrelevant. King digs deep into humanity here, excelling in every aspect of what this story is attempting to tell.

So, if you’ve skipped everything above and are jumping to the concluding paragraph to get the tl;dr of this review, read this sentence: Mister Miracle #5 is fucking amazing. This issue is not “best of 2017” material. Statements like that feel like they are cheap when referencing work that is this good. It is a masterfully crafted, integral piece of a series that is, thus far, the kind of work that highlights how amazing storytelling can be in the medium of comics. Tom, Mitch, Scott, Barda…I can’t wait to see what is next.