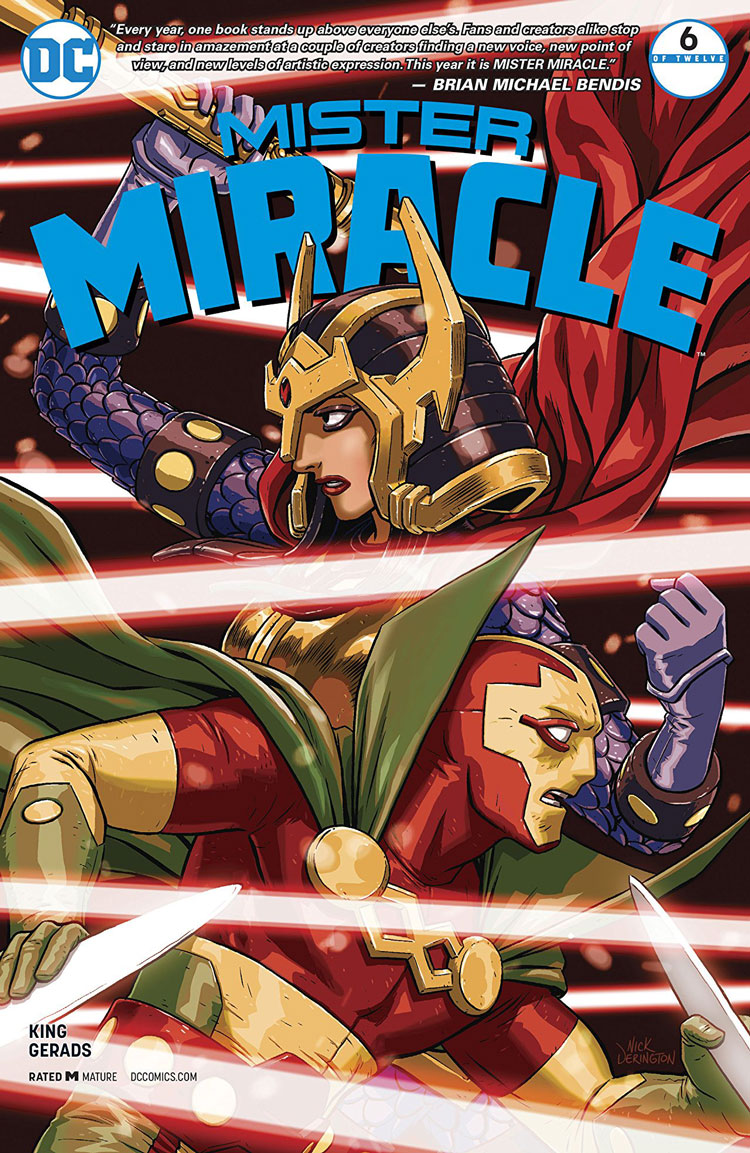 What is even going on in the world. We turn on our TVs, phones, and tablets to find insanity spreading like a disease. It’s inescapable.

Even for the super escape artist Mister Miracle.

It’s the one thing that he has discovered that he can not break free of: the insanity of life. The question, though, is the insanity from within his soul, within in his mind as the Anti-Life equation? Or is it just reality? Though this issue doesn’t solve that question, it does point to an answer.

Tom King’s astounding writing takes us headlong into issue #6 of Mister Miracle. There’s a momentary one page pause for us to take a deep breath and grab hold before launching into the action. To start off, he continues to connect this series to the original fantastic 1971 Kirby run. The introductory wording is taken straight from the opening of Kirby’s issue #6.

If you delve a little deeper into Kirby’s text you find a description of the character Funky Flashman that seems to be a major theme for King’s MIster Miracle: “The opportunistic spoiler without character or values who preys on all things like a cannibal  — including you! Like death and taxes we all must deal with him sometime.”

Through life, evil in some form or another continues to be present threatening to consume everything. This is illustrated visually in King’s story as “The Flasher”, a device that consumes everything that is placed in it. As much as “Darkseid is”; evil is. Whether it’s corrupt government, men without morals, or senseless murderers, we just can’t escape it. As much as we struggle to escape (like Scott Free), impending doom it will always be present with us. In issue #1 Scott had tried to escape but was unsuccessful. He has found, though, that facing the problem head on instead of accepting his fate is part of the answer.

There are some major revelations dropped in this story (none of which will be spoiled here) that — if are really happening — are very big. (There are hints in the story and in the artwork though, that not everything is as it seems.) These events, however, are not even the best part of the issue. King takes Scott and Barda through a fun series of levels that will remind the reader of something out of a video game.

The key to this part of the Mister Miracle run is Scott and Barda’s nonchalant conversation as they are facing dangers that are harrowing even for regular super heroes. As they fight, they discuss changes to their apartment like a couple would do over a cup of coffee. So, life goes on even during the darkest of times. When everything else falls down around you, or fails you, life goes on. You can either let it kill you or you can face it, like Scott and Barda have chosen to.

This of course ties back into the overarching story of Scott’s depression. Just as mental illness is a disease, Scott’s disease is the Anti Life Equation: mathematical proof of the futility of life. However, Scott’s savior is truly Barda. People that are lost in the the throes of depression but have no one by their side are facing almost certain life ending consequences.

She is not abandoning him, she is not babying him, but she is living life with him. Though Scott is stuck with the equation he is choosing, now, to live through it with the help of Barda. Life can seem like everything is going well, until out of nowhere it appears and threatens to doom you. This is mirrored in this issue by the surprising closing panels.

But Barda is by his side, so there is hope.

It’s crazy, like our current society, but life goes on. Our hold on sanity may be threatened but it is our choice to let it overwhelm us. Barda makes an observation about something else entirely but it really is a good message for this issue, and possibly the entire run: “you want to escape the box. But if you are escaping the box, you are still in the box.You’re not in the box, Scott. You’ve got nothing to escape.”

Mitch Gerads’s artwork is perfect for this story. He more than successfully is able to impart the feeling of depression, paranoia, and intrusive thoughts in their ebb and flow washing over Scott in waves. The Anti-Life Equation is constantly threatening to over take Scott’s reality, but he persists — not as a god would, but as a human. And Gerads’s artwork is so human.

The New Gods, though portrayed in their usual garb, seem more human than deity. It’s almost as if we are attending a costume party and all of our friends are dressed up as the DC characters. They are on our level and very accessible. The size of the panels and the characters within make the heroes to seem much smaller than usual. Instead of being larger than life ,they are smaller.

He also uses all the extra space to give a sense of the journey that the characters are going through. As they travel through tunnels, the panels shrink down to the limited space the characters are crawling through. For scenes in a tank of water the combination of the panels is the entirety of the area of the tank. It’s a lot of fun to experience with them and again is like playing a video game.

Gerads’s use of nine panel layout throughout the issue makes the story feel a lot longer than the usual 22 pages (this is a good thing, though!) and also allows the characters to do more acting. The panels give Gerads the room to showcase the formidable combative skills of Mister Miracle and Big Barda. Abrupt changes in emotions for the characters are much easier to display with sequential panels of this type. And there is no doubt so much emotion going on here. He does a beautiful job of giving life and emotion to Scott and Barda’s faces.

One of the best examples is a panel before the last page. There is such happiness displayed. The final page of panels has a nice effect that as stated before parallels the intrusion of depression or evil into life. There are pieces of tape juxtaposed over each of the panel and seems to allude to trying to hold things together before it all just falls apart. To wrap the artwork up, Clayton Cowles’s lettering ties everything together giving meaning, inflection, and importance to the dialogue that King has written. The lettering flows as well as the story does and becomes part of it rather than just text on top of art.

Mister Miracle is so much more than just a comic book. It’s the way King, Gerads, and Cowles are dealing with this world we live in and showing that there is probably no explanation for it. King seems to be saying that life is going to happen and it’s up to us to continue to live through it. The creators have done such beautiful work on this series so far that even if you read it just for fun there is so much here to enjoy. It is the epitome of what comic books are all about.