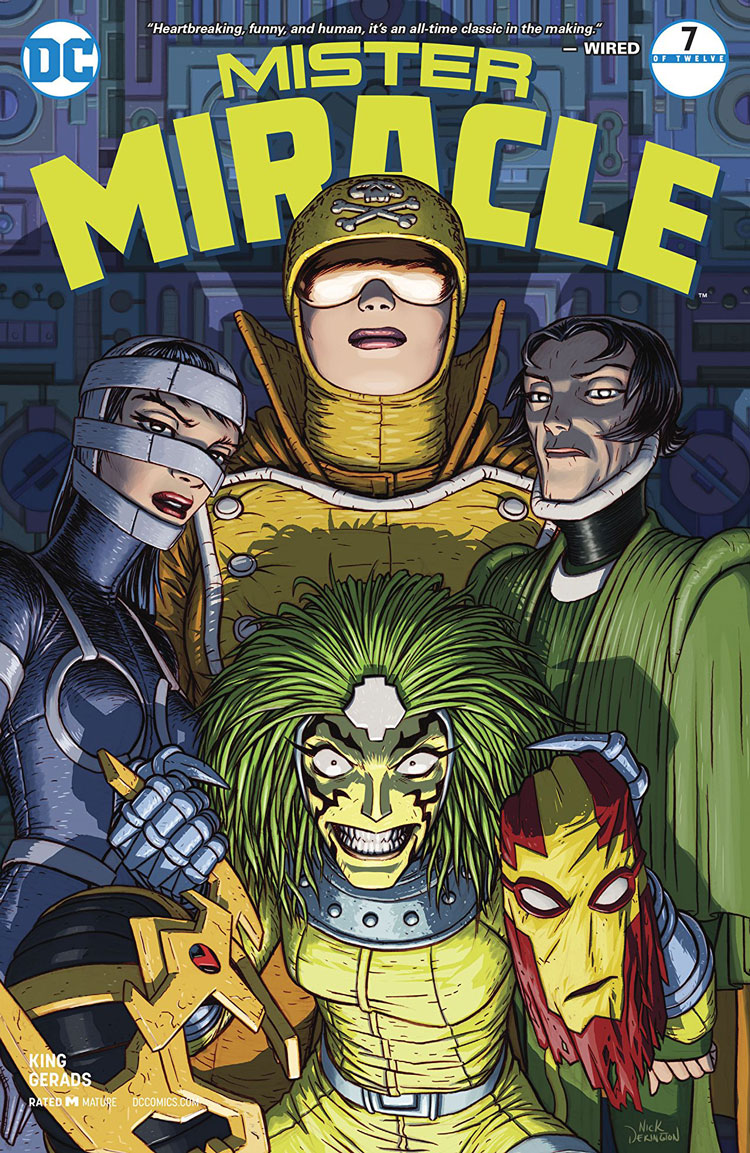 As one would come to expect from Tom King and Mitch Gerads, there is no escaping from the fact that Mister Miracle continues to be one of the best comic books within the past year. This issue is simple and yet has big reveals in it that will leave the reader wide-eyed. There is nothing given away in this review so read on — without fear of having to escape the spoiler!

This issue focuses around one event and King successfully conveys the gravity of this moment on not only Scott, but those around him. Friends and enemies. The humanity that he gives all the characters is beyond what readers will find in most comics today. These characters are more human than we try to pretend that we are not.

Half of the genius of King’s writing is not monumental speeches or eloquent soliloquies, but feelings conveyed in half-spoken sentences or one-word answers. These carry so much more meaning for the reader because we find ourselves in those moments every day. At the same time, he is giving us those little moments he drops in these larger connections to the DC cosmos, never letting the reader forget that these are more than just another couple and Scott is more than just a man. But he is portrayed as only just a man. He is a man with a serious problem that began at the beginning of this series and it seems that instead of escaping he is only entrapping himself at every step.

Mitch Gerads does not cease to amaze with not just his artwork but the layout of the issue itself. He continues the use of the sequential nine-panel layout that gives so much space for his characters to act the hell out of their lives. Among other things, Gerads gives his characters so much life with their expressions. Whether it is happiness, anger, or extreme anguish he imbues Scott, Barda, and the supporting cast with emotions that the reader can share and experience in that moment.

What is really great is that sometimes this captured emotion is just in a sideways glance from Barda to Scott or vice versa. But there are also some amazing scenes of intense emotion from some of the characters that are very visceral and gorgeous. Probably the best part of this issue is a very interesting POV series of panels that I haven’t seen done before. It puts the reader right in the face of a very private and emotional moment.

Gerads’ use of texture throughout the issue gives the story such a “real” feel to everything. There are no moments that aren’t covered in these textures and stains. This isn’t the perfect pretty world of DC’s more well-known characters, though there is a connection to them. This is the gritty underbelly of the DC universe. It’s, again, the human element that is so imperfect and damaged that makeup the story King and Gerads are telling us.

Clayton Cowles does such an outstanding job at lettering: as always. Mister Miracle has given him room to flex his lettering muscles and bring a stylized look to it that not only further cements this world but is a vital part. He skillfully emphasizes words that give the characters their voices and the sound effects let the reader hear the world around them. Cowles is an important part of Mister Miracle and without his talent the book wouldn’t be as good as it is.

Overall, Mister Miracle continues to be the best book being published today. The fact that it is a limited series just makes the story even better because the reader knows this is all leading to something. The mood is building to the end that we are rapidly approaching and fear for our hero is all consuming.

Don’t wait for the trade to enjoy this story. Waiting for each episode is a big part of the tension that is building. I can only assume that this talented team will continue to crush the rest of the story and the conclusion in the near future.