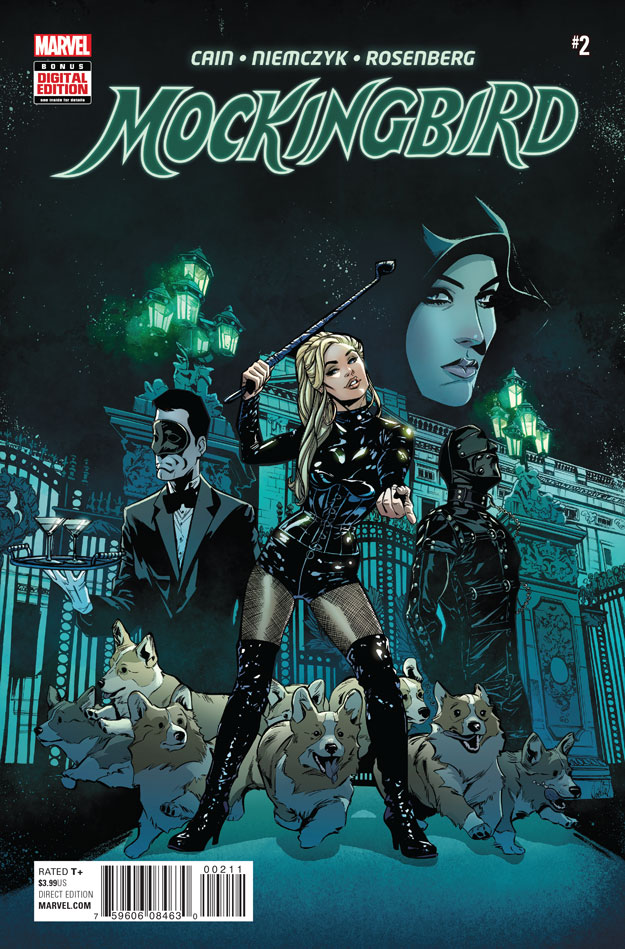 Who’d have thought that sororities and cookie will take you to the Hellfire Club.

Bobbi has infiltrated the Hellfire Club with the intent to rescue Hunter, whose own exploits have landed him in the shackles of the famous and clandestine organization. Moving through tunnels and taking care of leather and latex clad henchmen, Bobbi and Hunter find themselves in a couple of compromising positions before Bobbi has to take care of other business.

I found this issue to be a departure from your typical spy story in mainstream comics based on its use of humor, gender, and Bobbi’s relationship with Hunter. Mockingbird #2 is enmeshed with a universe that has capes and superpowers, but not in a way that reduces its capacity to be fun and engaging. Seeing Bobbi at the forefront of her own adventure is refreshing and helps to infuse the best parts of her character within the MCU with her longstanding role within the 616.

Chelsea Cain’s Bobbi is everything I’ve seen in her and everything that should be in a solo comic headlined by a woman. Bobbi is the master of her environment, self-assured, confident, and powerful. Cain brings out Bobbi’s wit and her prowess for espionage, delivering amazing one-liners throughout the story. My absolute favorite moment in the issue was Hunter proclaiming that no one’s cared about the Hellfire Club since the 80s, an excellent continuity joke for so many reasons.

In terms of execution, the art is wonderfully polished. Kate Niemczyk’s style works well with movement and action, evidenced by an early double-page spread that focuses on Bobbi fighting Hellfire henchmen. Niemczyk also used outlines for wonderful effect, making some characters more prominent, especially in busy scenes. These thick lines around the characters make them pop. Rosenberg’s work stands out in each of the environments through the issue. These monochromatic schemes evoke atmospheric emotion and provide a method of further emphasizing the characters. Rosenberg deftly uses subtle themes within the environment to highlight the action and objects within the story.

I also loved that this art team used BDSM elements to subvert common convention regarding men and women in comics and their portrayal in sexually-themed environments. The men throughout the issue either wore less than the women and they were nondescript in comparison. Considering the typical portrayal of women within the Hellfire Club as more overtly sexualized, Niemczyk and Rosenberg’s work was a nice change of pace. The women are portrayed with power and dominance, rather than made the objects of sexualization. Within the context of comics, Mockingbird #2 in particular stands out and represents the need and utility of exploring sexuality beyond women being created for cisheterosexual male consumption.

Mockingbird #2 exemplifies the need for diverse creators and the value of women creating women. Had this story been written or drawn by a man, I feel as though it would have come off very differently and likely problematic. Having Cain, Niemczyk, and Rosenberg at the quill and brush of this series means we get a story of a woman with agency with less likelihood of problematic themes arising, particularly with the use of BDSM elements. Bobbi feels real, she’s in charge, yet her characterization is not done in a manner that comes off hamfisted or based on men’s ideals regarding women and leather.