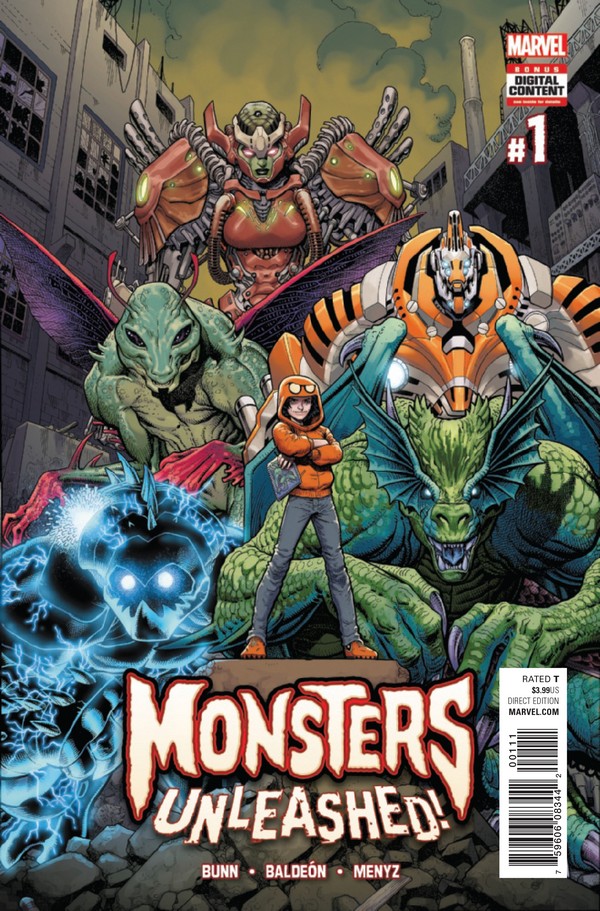 From the outset, Monsters Unleashed #1 makes a colorful splash. The issue opens with a stampede in Salt Lake City, Utah, but hops around a bit before the final page, giving Kei Kawade and company a nice bit of paper to make their regular series debut.

Writer Cullen Bunn employs Damage Control and S.H.I.E.L.D. liaison Gloria Clark to introduce the Kawade family and their predicament: Kei can summon monsters by drawing them and has brought five new behemoths into existence. Those five creatures – the insectoid Scragg, robotic Mekara, electric Hi-Vo, dragon-like Slizzik, and battlesuit-wearing Aegis – answer Kei’s beck and call, earning him the moniker of Kid Kaiju. Oh yeah, Elsa Bloodstone is in this comic, too.

Not only does Bunn manage to get readers completely caught up to speed in the span of one issue, but he also sets up mystery and adventure that can scale to match this series’ duration. As was revealed in the Monsters Unleashed mini, there are Leviathon about. These interstellar beasts are large and seek to be in charge, but that’s what Kid Kaiju is fighting for. Despite the fact that he’s only eleven.

The art on this comic is simply wonderful. Short of getting Arthur Adams to draw the monsters inside (he did the cover!), no artist is better suited for the bizarre, imaginative range of characters present in Monsters Unleashed #1 than David Baldeón. He earned his stripes drawing a wide array of oddities in Web Warriors and carried that over to Marvel Tsum Tsum, so assigning Baldeón to Monsters Unleashed only makes sense, as the concept is a healthy blend of toyetic notions and multiversal variety.

The ensemble cast of the comic book really gives Baldeón ample opportunity to display a crazy range, with the five main monsters (plus foes), the Kawade family, Elsa Bloodstone, H.E.R.B.I.E. (yes, H.E.R.B.I.E.), and a surprising collection of Marvel bad guys. With battles that involve other monsters and tropical locations, Monsters Unleashed #1 seems like a concept collection for an animated series. Everything a kid could want in an action playset is right here, and it would make for one wildly entertaining cartoon. It’s the wackiest bits of Ben 10, Godzilla, Power Rangers, and Kim Possible all mashed together, with dashes of humor, intense moments, and scenes where you just want to pump your fist in the air to cheer on Kid Kaiju and his team.

The animation scene might be where colorist Marcio Menyz pulls the ridiculously fun, bold colors from. Monsters Unleashed #1 has a few signature colors that pop through on almost every page: light blue, dusky blue, bright orange, and vibrant green each take turns popping out of the panels, with several opportunities for them to mingle and clash, just like the participants in this adventure.

Letterer Travis Lanham is not left out of the fun, however, as he decks the books for Kei’s studies with titles like Engineering Applications of Vibranium Alloys, Terrigen Chemistry, Beginning Kree, Artificial Intelligence and Alien Diplomacy in addition to the classic word balloon styles employed for bellowing behemoths and robotic entities.

Good grief, this is a fun, (mostly) all-ages friendly book. Bunn captured my attention with his treatment of Valkyrie in Fear Itself: The Fearless (one of the few crossover-related books I actually go back to re-read every so often) and the over-the-top ideas he dropped into the Monsters Unleashed miniseries. Add in Elsa Bloodstone, find a way to make H.E.R.B.I.E. cool (thanks in no small part to Baldeón’s design), and bring back the monsters, and you’ve got a comic that has my attention and money. If you’re looking for something different, smart, and independent, give this a go. You just might find a fun comic worth adding to your pull list. I did.