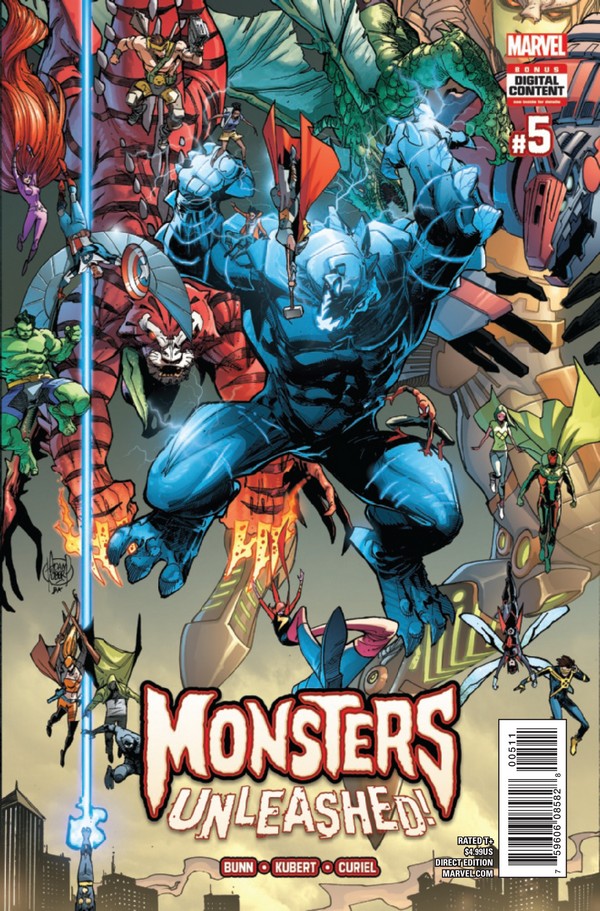 As is the case with most Marvel events in the last half-decade (full decade? More?) the story could have been a little more compact, the end more succinct, the marketing plan less transparent. Marvel isn’t in the business of being succinct and compact, though. They’re in the business of selling comics, and if one story leads to a half-dozen or more tales, then make it so. In this case, outside of the half-dozen or so one-shots that weren’t necessary to understand or enjoy this series, Bunn and crew add another weapon to the Inhuman arsenal, refresh Elsa Bloodstone (despite the refreshing she just received in A-Force), and give Kei Kawade a purpose in the Marvel Universe while also adding more pins to the landscape map and more diversity in the type of story that’s possible in the Marvel Universe.

Bunn’s story is pretty much by-the-book: heroes are out-powered, but find a way to persevere until they can turn the tide, eventually prevailing. At no point does Monsters Unleashed #5 seem out of hand, nor does Kei Kawade (who adopts the Miles Morales-assigned moniker Kid Kaiju by the end of the issue), but Bunn keeps the story brisk and swings through the cast nicely, giving everyone a chance to contribute, if not through their powers, then at least in dialog.

Kubert’s art is decent to great throughout Monsters Unleashed #5, but from cover to cover experiences some wobbling inconsistences. Kei, in particular suffers the most, as his age is nebulous and shifting throughout the issue, as though that might be his super power. When Kubert connects properly to Kei’s youth, the drawings are compelling and believable, but the panels where Kei clocks in somewhere in his late teens to early twenties fall flat. Likewise, the monstrosities at the heart of Monsters Unleashed #5 lack consistency. The Leviathon Mother is the anchor of the bunch, but the others (including a handful of new characters) need a little more care to properly transmit.

David Curiel’s colors are solid throughout the issue, with bol color choices celebrating the crazy, unrestrained world this battle takes place in. Blues, oranges, reds, and greens – these are the colors of a monster fight, or at least the colors of a giant monster fight in the Marvel Universe. Likewise, letterer Travis Lanham handles the rumbling tones of the monsters, the translations, the variations, sound effects, and dialects.

Slightly overspent, and certainly uneven throughout the breadth of the series, Monsters Unleashed was more fun than most Marvel events in recent memory. If you skipped the series to this point, Monsters Unleashed #5 gives you enough to prepare for the ongoing, which Bunn will also be writing, with art from David Baldeón. I might not rush back to re-read this before the first issue of the ongoing is in my hands, but I’m sure I’ll check it out again by the time this series hits Marvel Unlimited.