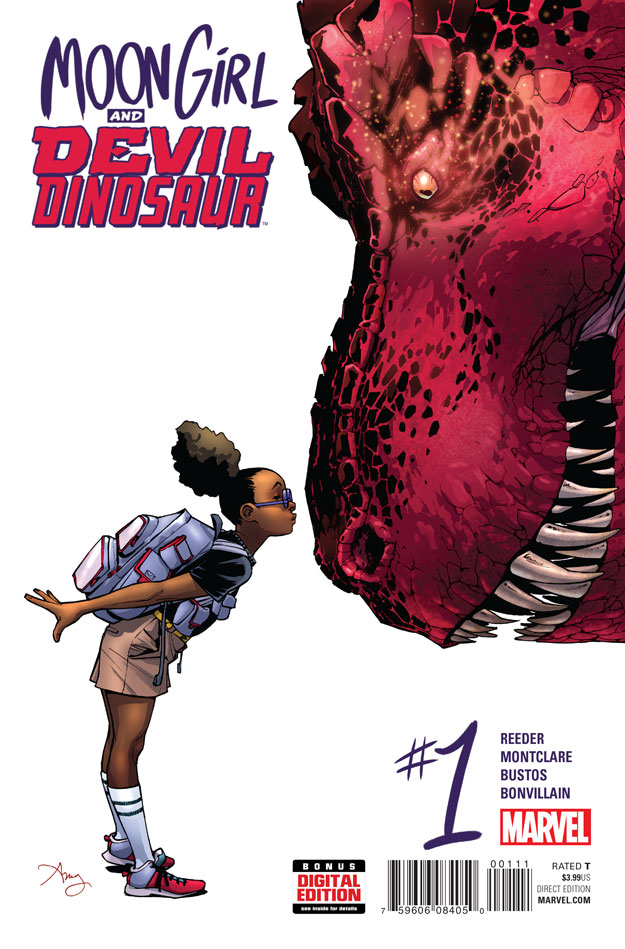 Her head in the stars, our wonderful Moon Girl is going to get a blast from the past.

Lunella, or Moon Girl as her classmates derisively call her, is a smart, young Black girl just trying to make it through school. She’s full of brilliant ideas and a thirst for curiosity and adventure. Little does she know, she’s come into contact with a strange artifact connecting to prehistoric times. When she finds out, her world becomes an exciting mix of the past and present.

My favorite aspect of the writing in this issue is how Brandon Montclare and Amy Reeder fleshed out Lunella and her relationships with others. Her parents are trying to help her adjust, while her peers jeer at her. Even her school’s faculty are unsupportive. Lunella is a vulnerable and human character with amazing potential. Montclare and Reeder use Lunella’s challenges to frame her and this issue, but they do so in a way that gives a sense of drive to Lunella, rather than making her a victim.

Natacha Bustos and Tamra Bonvillain’s art captures the wonder and activity of a child’s world and the wildness of Moon Boy’s prehistoric era. The world within Moon Girl and Devil Dinosaur moves, it’s real, and the art conveys this perfectly. Bustos’ lines have a geometric touch to them, making both the characters and the environments within the issue rather distinct. I also love the varying skin tones in the issue. Bonvillain’s colors bring out the diversity of Lunella’s world, really taking us to New York rather instead of readers having to imagine that diverse characters exist in the periphery of the comic’s panels.

Lunella’s struggle mirrors that of many Black youths, especially those we would call “gifted.” Often, there is a struggle to be recognized as intelligent and competent by virtue alone, rather than simply gifted for a Black person. There is also a challenge in recognizing your capabilities as a Black person when the world sometimes laughs at you in spite of your talents. I can see this comic being very helpful for young Black kids who aren’t being recognized for their skills, or for Black adults who saw similar struggles as Lunella’s as they went through school.

I definitely recommend Moon Girl and Devil Dinosaur #1. Lunella is a great protagonist for this series and a refreshing face for many reasons. Her story with Devil Dinosaur is just beginning, and there seem to be some interesting story elements that will unfold. If you work with kids in any capacity, keep this on your shelf. Whether Black, gifted, or not, I can definitely see this series doing a lot of good for many of the young people in our lives.