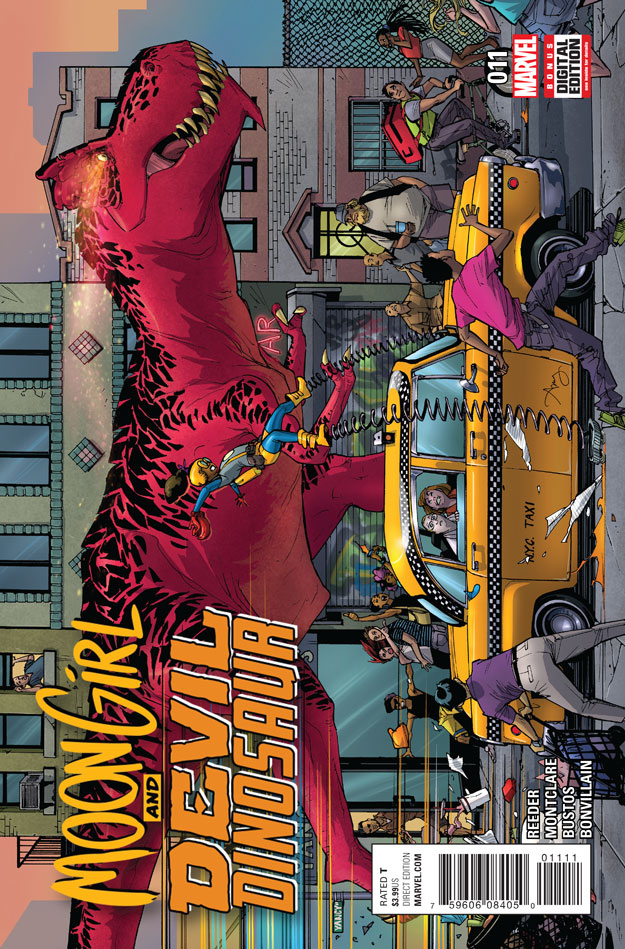 Kid Kree has invaded Lunella and Devil Dinosaur’s hideout. As she escapes to ask Ms. Marvel, Kamala Khan for help, she unexpectedly switches bodies with her reptilian friend. This leads to her being hospitalized and effectively confined to her room once her parents catch wind of the situation. Soon, Lunella feels as though she’s made a friend, while Devil Dinosaur is wary, and she sends him off angrily, only to find that he was right about their new “companion.”

Lunella just really can’t catch a break. This was one of the most heartbreaking issues because, yet again, she has angrily sent her dinosaur pal away, only to find that she does not have the bastion she once thought. The end of the issue reveals why Marvin has gone through a shift in his behavior towards Lunella, and, though it did feel a bit on the nose, it does at least provide a new dynamic between the two characters.

Brandon Montclare and Amy Reeder bring back Kamala in an effort to highlight Lunella’s work to feel as though she belongs somewhere. Kamala’s surprise inclusion in the issue touched on similar elements of her prior appearance, in that she is to Lunella what Carol was to her. This interplay of characters creates a charming change which at first seems to give Lunella the reprieve that she needs. However, the stark contrast to these warm moments and the betrayal at the end of the issue prompt a dramatic move from a place of comfort for our main character and the series to one which continues the theme of the challenge of finding your place in the world.

Natacha Bustos has drawn one of the calmest issues of Moon Girl and Devil Dinosaur to date. There is far less pressure placed on Lunella, even as she’s in the hospital, and much less emphasis placed on action. I like Bustos’ work in this issue because it mirrors Lunella’s gravitation toward creating a sense of comfort for herself and how it nearly comes into her grasp. These parallel to the narrative brings home the emotions with much more effect. Tamra Bonvillain, quite the color star, employs deft use of a secondary color scheme, creating an effect that softens the environment within the issue but allows for enough contrast to show action and emotion. Bonvillain is rather brilliant, and I feel the subtlety of these schemes comes into play much more than in previous issues, again mirroring the narrative of assumed peace and realized threat by the end of the issue.

I hate that Moon Girl and Devil Dinosaur #11 brought me deeper into the land of feels, but the story continues to be well done. I do want Lunella to get some relief, but her struggle offers some important dialogue and plot which makes the overall story more provocative. With yet another surprise revealed for our grade school genius, the future of this series seems like it’s going to deliver on the emotions and the action.